And control it via your phone.

Smartlocks are increasingly commonplace, but this startup is taking a different approach. Rather than replacing your existing lock, this company has developed a barricade that installs at the bottom of the door, aiming to improve security. 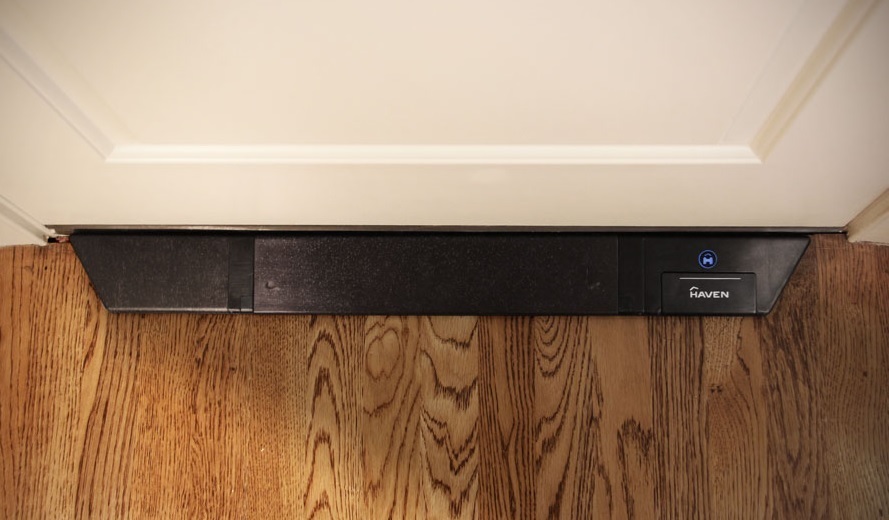 In this note, we dig into its features, its four main drawbacks and its market potetial.

The short video below explains the operation and function of Haven, which rather than modifying the door itself adds a retractable barrier to the floor just inside the opening:

The big difference that 'adds security' is a part of the lock body pops up and prevents the door from swinging open. While this type of lock would not be acceptable in many commercial facilities where 'free egress' is mandated by code, residential homes do not fall under those occupancy codes and are legal for use.

However, Haven's designers understand that Egress concerns are still an issue, and the homeowner is able to 'override' the lock simply by stepping on it to drop it down. 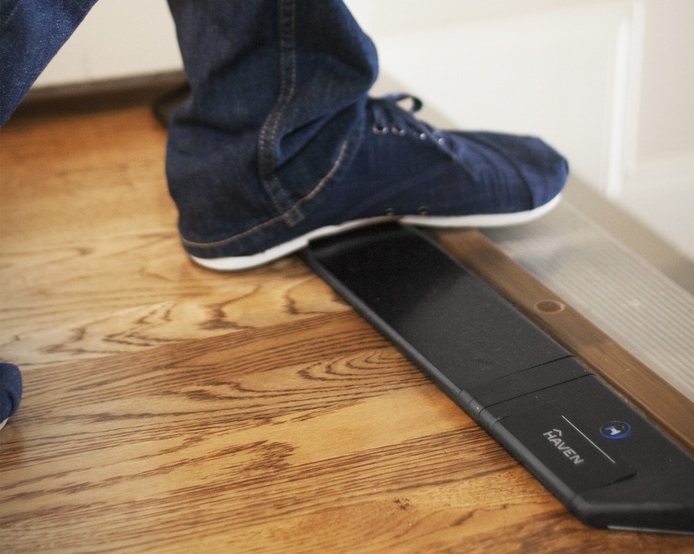 Controlling Haven is done via a smartphone app that communicates with the lock via WiFi or BLE, but also can be done via a factory issued fob accessory or BLE bracelet. 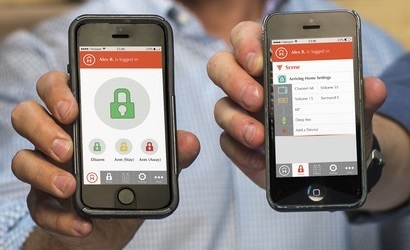 The developer also plans to release compatibility with Nest and Apple Home automation control hubs, and lists 'official' membership in both integration programs.

Haven is taking pre-release orders for $319. Factory issued fobs cost $40. While the unit is designed to lock single doors, the company says it can be adapted to control double doors if mounted between them.

Unfortunately, Haven has several design shortcomings we do not expect will be fixable and will likely doom widespread use of the product:

Battery Powered: The biggest problem for Haven is the fact it operates off battery power. While the unit claims it will warn about low power in advance of failure, the unit loosing power while in a locked position is a risk. Users will be unable to step on/mechanically override the lock if power should fail while outside the door.

Durability Concerns: Any time a device is mounted on the floor, durability is a concern. While Haven claims water resistance and even chainsaw resistance, the lock will be subjected to people walking over it and any number of heavy, dirty, or wet objects being dragged over it.  Durability of floor mounted hardware is paramount, and even mechanically simple heavy duty door hardware like floor pivots routinely fail and must be replaced periodically, not to mention the lifespan difficulties of a plastic housed Haven will encounter.

Inswinging Only: In North America, most house entry doors swing in. However, in other parts of the globe this may not be the case. Customers in Europe or even with non-standard openings in the US may find Haven does not work.

Destructive Installation: A showstopper for some users is likely the requirement to mount Haven to a flat, hard surface. Those with carpet are advised to cut away and remove carpet under the unit during mounting:

"HAVEN will need to sit firmly on a hard surface, so wood, vinyl, linoleum, ceramic, tile, granite, concrete or stone are all compatible. If carpet is present, trace an outline of the provided template with a razor blade or box cutter. Remove the excess carpet and install accordingly."

Many DIY users will hesitate to destroy flooring to facilitate the lock and opt for less intrusive options.

Haven launched a crowdsourcing effort that ultimately fell ~$35,000 short of it's $150,000 goal, but the company still plans to have the lock available by an August 2015 shipping date [link no longer available].

Haven will honor the backers who pledged by shipping them units at the prices offered during the campaign ($199 each), essentially meaning the company has pre-sold $115,000 worth of orders. The company has stated they are not collecting pledge money/charging credit cards until units begin shipping.

Haven's concept is not new. Similar types of 'barricade locks' that are manually locked/unlocked have been available since the mid-1970's. Current production examples cost ~$35, or about 10% of Haven's $319 price. However, purely mechanical versions cannot be 'unlocked' from outside the opening, so that feature is Haven's strongest differentiator.

Haven Targets School Security with Lockdown Lineup on Nov 08, 2018
Haven, a US startup founded in 2014 as a residential-focused company, has now...
Directory of Access Control and Intrusion Startups on Oct 30, 2018
This directory catalogs access control and intrusion detection startups IPVM...
Assa Abloy Acquires August on Oct 25, 2017
The mega access control manufacturer, Assa Abbloy, has acquired [link no...
Comments (12) : Members only. Login. or Join.