With Wide Dynamic Range becoming an increasingly prominent feature for manufacturers, understanding the actual field performance of cameras is critical. Adding to this is the recent move of a number of manufacturers adding 1080p/3MP WDR cameras (like the Panasonic 509, Avigilon H3, Arecont WDR series, etc.)

In our recent shootout of the Panasonic 509, we included the Sony CH240, a similar specified camera that performed poorly in our WDR tests. However, performance can be easily improved by increasing the bit rate from the camera's default of 2Mb/s CBR to 4Mb/s CBR. The image below shows the notable improvement: 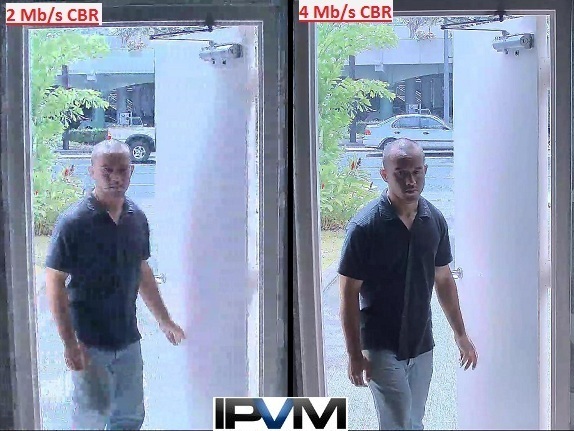 The use of CBR makes optimization more complex. Among the cameras tested in that shootout, Sony is the only one that requires the use of constant bit rate. All other cameras allow (and typically default) to variable bit rate. This enables the camera to adjust bit rate dynamically when scenes are more complex or harder to encode. Making it more challenging is that Sony CH240 defaults to a fairly low bit rate for a 1080p camera - 2Mb/s. Note: See our review of how picking the right bit rate for CBR cameras can be challenging.

While increasing the CBR bit rate clearly improved this scene, it does come with an obvious cost. Bandwidth and storage consumption doubles across the board, even during times when the scene is less complex such as when the door is closed or when no one is moving through the area.

Nonetheless, with this bit rate increase, the competitive performance of the Sony CH240 shifts from near the bottom to near the top of competitors in this test, as shown in the comparison below: