For 18 month, Sony has been hyping 4K cameras, a year before they even announced a 4K network camera. Now, amidst intense competition and price pressure, Sony has released their long awaited 20MP / 4K camera, the SNC-VM772R.

Below are previews of side by side image comparisons between the 6 cameras:

The bigger problem for the SNC-VM772R is its many limitations (no multistreaming at 4K/30fps, no 4K + 20MP simultaneously, WDR cuts frame rate in half, VBR is not true VBR, etc.)

For those who are Sony fans and are willing to pay the $2,000+ price tag, we expect they will be happy. However, given the limitations, the cost and the competitors available, we believe Sony will have difficulty winning a large percentage of other camera users.

The SNC-VM772R has several streaming limitations compared to other 4K cameras:

No true VBR streaming, using a target bitrate instead of target compression and bitrate cap.

However, in narrower, ~40' FOVs, test chart becomes overexposed and impossible to read past line 2 in Sony 4K, not present in other IR models.

Much better low light performance than all non-IR models tested, none of which produced usable images of our subject at ~0.05 lux.

H.264 streams functioned properly in Avigilon, Exacq, and Milestone. MJPEG stream was supported only by Milestone. Genetec Security Center 5.3 R1 was unable to connect to the camera but Genetec informed us that R2 and higher can.

We review the physical features of the VM772R in this video. The camera is similar in size to Sony's other outdoor dome models, and slightly larger than average for IP66 full-size domes (though much smaller than Panasonic's 4K dome, the SFV781L).

The SNC-VM772R has two key streaming limitations not typical of other 4K models:

When turning WDR on, framerate is reduced by 50%, to a max of 15 FPS in single stream mode and only 5 when multi-streaming. Note that WDR does not function in 20MP mode (though the control is still shown in the web UI).

We review the issues above in this video:

In addition to 4K H.264 modes, the camera is capable of a 20MP MJPEG mode, as well. There are some limitations when using this mode:

In full light, the added PPF of the 20MP image produce stronger details of the subject and test chart. 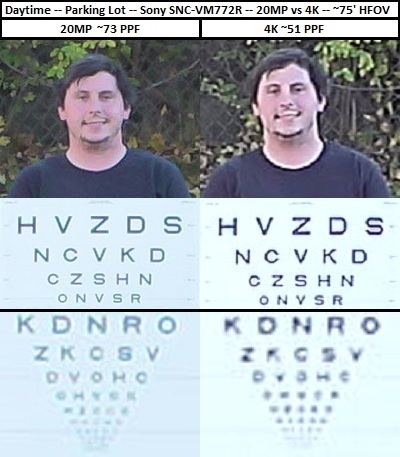 In low light, the 20MP image is noisier, obscuring details, with no real advantage over the 4K image. 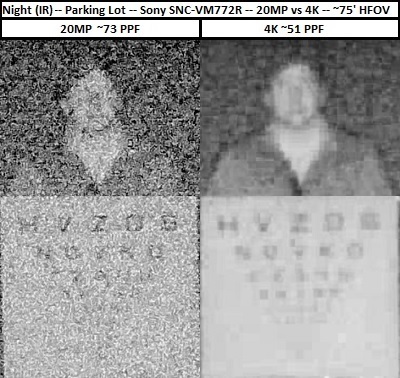 We shot the 4K cameras out at two FOV widths, ~75' and ~45' to show differences in fine detail between the 4K cameras. Below is the FOV used for testing:

In the narrower 45' HFOV, the SNC-VM772R produces details similar to Panasonic and Axis, and moderately better exposed than Bosch and Dahua.

In the ~75' HFOV, the SNC-VM772R performs best of all cameras tested, with a noticeably brighter (though noisier) image and better details of the subject and chart. The background is more visible than in other IR cameras, as well, where it is almost completely dark.

However, closer to the camera, with a ~45' HFOV, the Sony 4K dome washes out the chart past line 3, with some impact on our subject's facial details, though he remains recognizable. Neither Dahua nor Panasonic display these issues. Note that even at this closer range, the subject is not seen in any of the non-IR models.

In our tests, the VM772R met its 100' IR range specification. In the video below, our subject walks from ~125' to just in front of the cameras, becoming visible at ~100' range. Note that the camera adjusts exposure to compensate for moving subjects, seen here, but IR power is not reduced.

We tested WDR performance against an open overhead door in our warehouse scene, shown here: 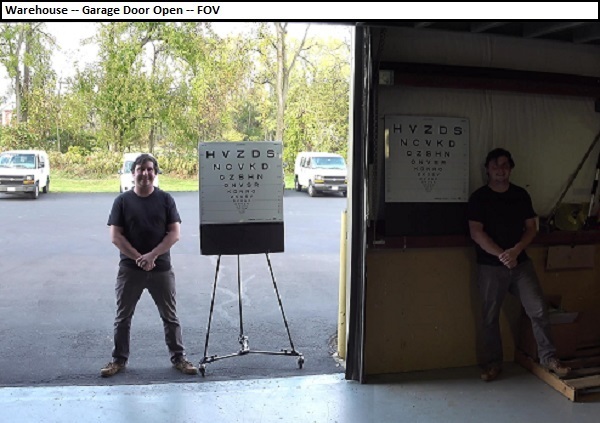 Images with WDR on were only modestly better exposed than those with WDR off, seen below. With WDR off, shadows are more prevalent, making the subject's face more difficult to discern. In the dark area beside the door, effects are much more noticeable. 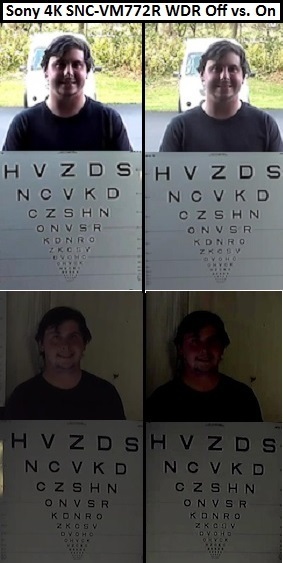 The VM772R's performance was below average against strong backlight, worse than Panasonic, Bosch, and Dahua in this scene, as well as the 6th Gen 1080p SNC-VB630. Additionally, in the dark area beside the door, subject details were weak. 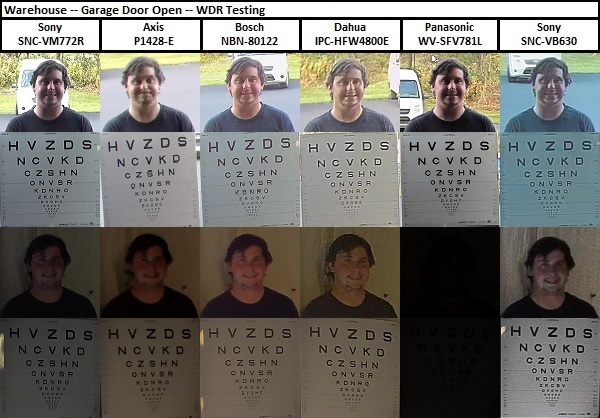 Sony does not include true VBR streaming in the SNC-VM772R, unlike other 4K cameras in this test. Instead, their "VBR" implementation includes a "target" bitrate and cap.

However, in our tests, target bitrate had only limited impact on bandwidth, with actual bitrates typically lower than target, though often times higher with only moderate motion in the scene. Moreover, the camera appears to increase compression despite bitrates remaining significantly lower than the cap set in the web UI.

Note, we tested with both the 1.0 firmware and the 1.02 firmware. In 1.0, VBR was simply broken and did not work at all. In 1.02, it improved to what we are describing here. Sony anticipates further VBR improvements in future firmware releases.

We show the VM772R's "VBR" implementation in action in this video:

Sony has included what they call "Intelligent coding" in the VM772R, which allows the camera to adjust compression and bandwidth based on either moving objects or static regions. Dynamic regions require VMD zones to be set in the camera (up to 4).

In our tests, Dynamic regions reduced bitrate by 40-50% in still scenes. However, with moderate motion in the scene, bitrates were similar to those when intelligent coding was turned off. This performance lags behind Axis' Zipstream technology, which lowered bitrates in still scenes up to 80%, and 10-20% in higher motion.

When using static zones, the portion of the FOV outside the region is more highly compressed, resulting in overall lower image quality, while bitrates are reduced only modestly, about 10-20% in still scenes, and ~3-5% with larger amounts of motion.

We review intelligent coding configuration in this video:

The chart below shows the Sony's 4K bandwidth compared to others. For these tests, Sony was set to an 8 Mb/s target bitrate (recommended by Sony), while others were set to VBR, ~28 quantization.

The chart below shows average actual bitrate (indoor, full light, ~160 lx) for target bitrates from 4-16 Mb/s. Sony's default cap of 32 Mb/s was used in all cases.

Cameras were tested using default settings unless otherwise noted. Shutter speed was set to 1/30s max in all models. Quantization was standardized to ~30 with an I-frame interval of 10 (1 per second) except in the Sony SNC-VM772R which does not use fix compression in its VBR implementation (see above).