What video surveillance applications is solar power commonly used for?

The Need for Detailed Estimation

We see 3 key factors impacting the use of solar in surveillance:

Given these factors and their variance, inside we examine a range of scenarios:

For this example, two outdoor pole-mounted PoE fixed cameras and wireless mesh node are installed in a remote location requiring solar power. To begin the solar power sizing calculations, the system’s load needs to be determined: The wireless mesh node uses 12VDC input and draws 4A for a total of 48W of total power, (including powering the 2 PoE cameras), 48W x 24 hours = 1152 watt-days of total load.

This table shows estimates for different locations with varying climates:

Looking at the table, areas with colder climates or more consecutive sunless days, additional equipment is required, which can increase price significantly. The Tucson system is less than 40% of the cost of Seattle’s due to the overwhelming disparity in hours of sunlight, battery efficiency and sunless days. The Tucson system required about 1/4 of the solar array capacity as compared to Seattle, but was just a little more than 1/3 of the price, which is not a linear scale.

Using a 4’x8’ sheet of plywood as a reference, the Tucson and Tampa solar arrays are less than one sheet in size, but the Seattle system is equivalent to almost 3 sheets of plywood. The following pictures give a good comparison of solar panel array sizes for different locations / climates: 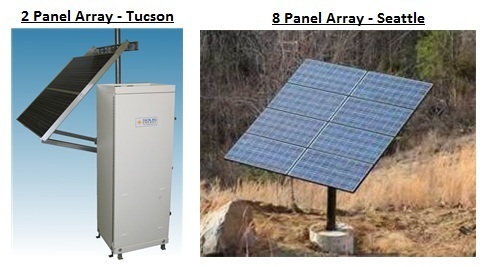 While the average battery for a solar power system is similar in size to what you would find in a large truck or golf cart, the example installations do not require enough batteries that a battery shed would be required. Compared to household appliances, the Tucson and Tampa system’s battery cabinets are about half the size of side-by-side refrigerator, the Kansas City and Albany system’s cabinets are n1early the size of a washing machine, and the Seattle cabinet is the size of a chest-type freezer. The above 2-panel array picture illustrates the cabinet size required for the Tucson and Tampa example systems. Below is a picture of the chest type battery enclosure for the Seattle system: 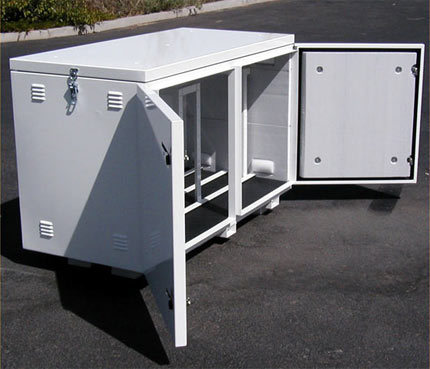 Doubling the Load: The addition of two 45W LED illuminators (at 50% duty cycle) to our Kansas City example almost doubles our original system load. However, the calculated price of the solar equipment package is approx. $15,000, which is only about a 60% price increase. This will be approximately the same size system as our Seattle example above with the same solar panel array but fewer batteries.

Stand-Alone 5W Camera: Using our Kansas City example again and substituting one stand-alone 5W low power fixed camera (with internal SD storage that is not monitored and accessed manually), we have a total load of 120 watt-days, about 10% of our original load. However, the calculated solar equipment package price is $2,600, about 30% of the original price. With this low of a power load, this installation may be a good candidate to use a portable solar power system typically used for boating or camping [link no longer available] that costs about $500, as shown below. 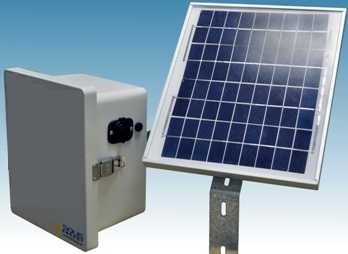 For our examples above, we used a solar manufacturer’s calculation tool with the following technique/approach:

The equipment’s electrical load is the biggest factor in the size and cost of a solar power system and the only one that the video surveillance designer has any measure of control over.

Approximate power loads of video surveillance equipment that might be used with solar power:

Insolation – Solar power systems are better-suited and more efficient in locations with more peak hours of sunlight and lower humidity as shown the darker areas of the below insolation map: 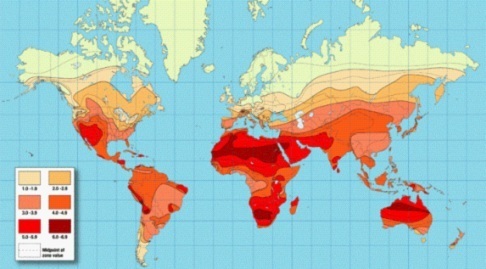 Solar power can still be used in lighter areas of the map but will require larger solar panel arrays, increasing the system cost.

Climate – In colder climates, batteries are less efficient and are de-rated in the battery sizing calculations. The estimated number of consecutive sunless days needs to be factored in the calculation so that the batteries will provide power during this period without receiving a charge from the solar panels.

As we have shown with our examples, due to the variation in sizes of solar panels, charge controllers, batteries, insolation and climate, solar power systems do not scale very well. Do not try to extrapolate data or estimate costs and sizes based on the above tables. It is recommended that you contact a solar power system manufacturer to get an accurate design and estimate tailored for your particular application.

Although advances in solar panel and battery manufacturing technology and market competitiveness are steadily lowering the price of solar power systems, they are still widely considered to be expensive or not aesthetically pleasing for use with surveillance systems. They should be used when other sources of power are unavailable or are economically impractical, or when environmental concerns or camera portability requires their use. Minimizing the power consumption of the surveillance hardware will have the greatest effect on reducing the overall solar power system cost. Solar power systems are most cost-effective when installed in climates with greater hours of direct sunlight. As each installation is unique, solar power systems should be professionally designed and estimated for the specific load, location and climate of the installation, as the pricing does not scale in a linear fashion.