Personal photos and videos played a major role identifying the Boston bombing suspects and will likely grow in importance. A new service, that integrates surveillance cameras and crowdsourced images from mobile phones, is being piloted at several Rhode Island schools. For this note, we interviewed Peter Mottur, President of Rhodeway Networks [link no longer available] to find out what their 'VizSafe' offering is and how it works.

Using the VizSafe app, teachers and staff can upload video clips and photos, and view all of the geolocated information that has been posted. The information from surveillance cameras and uploads, is populated on a map and can be filtered by time, date, incident and location. The web interface can be used to send immediate notifications to predefined user groups. Camera streams and uploaded images and video can be made available to school officials and first responders through the VizSafe web interface [link no longer available]. Uploaded pictures and video can be pushed to social media too.

The pilot will begin next month at four schools in the Portsmouth, Rhode Island School District and run for six months.

The screenshot below shows the early version of the web interface, an example of what would be available online and through the app. On the left are crowdsourced images and footage. Each incident is highlighted on the map with an "S." 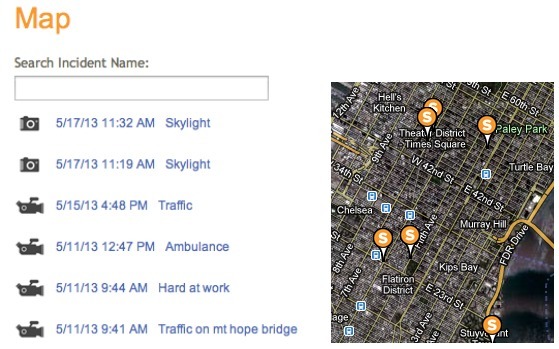 Mottur says the design was created for ease of use in an emergency ("If you are under pressure you don't want to have a cumbersome system."), but they encourage schools to find ways it can be used on a daily basis. "We think it's important because if it's only used for emergencies, people might forget it’s even there. You have to get users to really engage in it and make sure they're comfortable with it so if something bad does happen they are prepared to use this as a tool."

Rhodeway plans to embed the software onto Linux-based routers and modems. "Eventually, we plan to have this fully plug-and-play where it will recognize and self configure IP cameras on the system and automatically add them to the server collective," Mottur said. The priority now is finalizing the iPhone app for release next month when the pilots began. An Android version will be released soon thereafter.

Rhodeway is still working out the details for pricing of the phone apps, but says it will have a free version and a paid version. The paid version will allow private communications and content storage.

As Rhodeway is a regional integrator / provider who offers this as an add on, we do not expect it to be adopted outside their local area.

While a number of surveillance platforms offer apps for alerts and streaming live video, this is the first we have seen that allows people outside of the system to upload photos and video. Using the app to upload means the users will not need to connect live. This makes the system more flexible, allowing users to contribute content even after the event. Given the situation in Boston, we certainly see the value of bringing in evidence from non-traditional sources like mobile phones and tablets.

While VizSafe is not a practical choice for most, we do see this as a template for VMS platforms to add similar functionalities to expand their software's capability to manage video from more sources than just surveillance cameras.