For many local governments, one of the first reactions to an increase in crime is the call for more surveillance cameras. Last month, however, a small town in South Dakota decided that adding cameras just wasn’t worth the cost. For this update we talked to city officials and reviewed the proposals the town received when it considered installing security cameras.

Earlier this year, the city of Dell Rapids, South Dakota, population 3,600, started receiving complaints about vandalism occurring at businesses and private property located near the city park. A few Dell Rapids citizens appealed to the city to put up surveillance cameras to deter activity in the area at night and possibly provide evidence of who was responsible.

The city took the complaints seriously and looked into the cost of purchasing three cameras -- two for the city park and one for a nearby block. The city had around $5,000 to spend.

The city received two proposals for the work.

The first proposal, from Safe-N-Secure Security Equipment suggested three 2MP bullet cameras with integrated IR ($985/each [link no longer available]), 32GB of SD storage and wireless routers. The total cost would be $5,767. Deputies, would have the ability to view live footage from their vehicles only when within range of the routers. See below.

The integrator says it would need to install a new pole for the cameras to get the best view of the park. That accounts for much of the labor cost, according to an email from the integrator to the city.

The second proposal, from Dakota Security Systems, Inc., an Axis reseller, included three 1MP cameras, 32GB of SD storage, and routers and switches. The proposed price: $6,637. This proposal did not include itemized prices. In an email to the city along with the proposal, Dakota Security Systems attempted to justify the difference cost saying, “Please note that the cameras that we are proposing use the Lightfinder technology. We can revise this quote to reflect the same cameras that our competition is quoting, however, I don't think you would be happy with them." 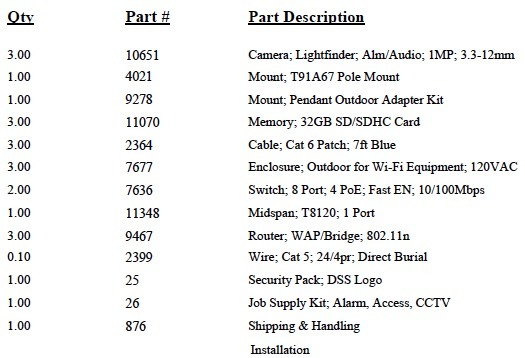 A third, less formal proposal came from a city official during a recent council meeting, reports the Dell Rapids Tribune. The city's finance officer proposed the city just install motion lights in the park bathrooms. "Even if you’re an officer driving by, you can see if there’s somebody in the bathroom because the lighting is on," she was quoted.

In the end, the city opted not to install any cameras. “The issues aren’t that extreme to justify the need or cost for those cameras,” said a city official I spoke to after city council decided against adding cameras.

“We don't have any buildings out there where we could hardwire them to a monitor or a DVR. It was either set up a mesh network, which would be expensive or put a wireless router above the camera so when people get within a certain distance they can see the images, but then people would have to go out there. It could have an SD card in it, but we would only really view it when there was an incident, so it would be reactive rather than proactive,” he said.

Instead, the city is adding motion lights in the bathrooms.

Overall, both bids were reasonably priced (at $2,000 per camera), compared to cities who regularly spend $10,000+ per camera. Despite this, the city could still not justify it.

Both systems could accomplish the city's goal of watching the park at night, however, it matched up an integrated IR camera vs an enhanced low light camera without IR (the Axis Lightfinder). While this was not the deciding factor, it is an increasingly interesting one to consider as the price points are now quite similar.

The system would not be connected to a larger wireless network because the city does not have one. A city official said funding a mesh network to support three cameras was not an option, but if they already had one, for their 911 system, for example, it is more likely the cameras would have been added. However, giving a government grant for a city/town of 3,600 would be a questionable use of tax money.