This company is worth $7 million already and was featured on US TV show Shark Tank [link no longer available]. 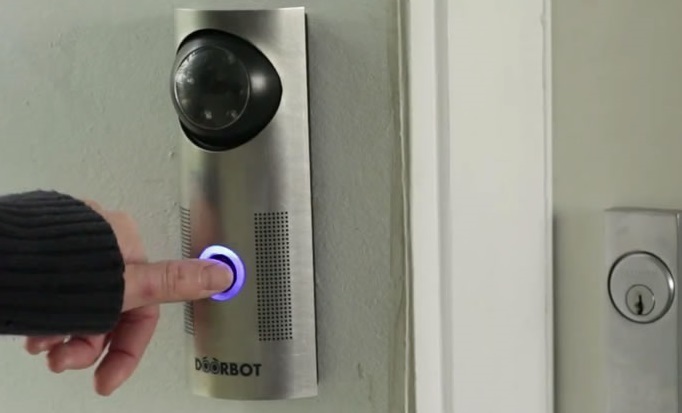 But the question: is it worth the price? Were the Sharks smart for passing, or did they see problems? In this note we examine Doorbot.

Doorbot's concept is a winner on paper: hang a doorbell that becomes a video intercom when the button is pushed, notifying the owner's smartphone or tablet and opening a real-time video session over WiFi. For homeowners, this is an appealing concept, especially those who might be thousand of miles away from the front door.

Even better, Doorbot claims to be integrated with a red hot door lock: Lockitron. When integrated together, the combo claims to let you remotely communicate with someone standing outside your door and then unlock it if you choose. While claiming powerful features, does it deliver?

The unit replaces your existing doorbell, and ties into the previously installed chime. From there, the unit serves live video and push notifications every time the button is pressed. The promo video below provides a good overview:

Several points standout after reviewing the video and the product's FAQ page [link no longer available]:

Big Problem: Getting It To Work

Despite the interesting concept and high-profile exposure, Doorbot's execution has been dismal. The company's social media pages are full of dissatisfied customers reporting basic functionality issues and complaining about slow response. One customer has even gone as far to upload a video demonstrating his problems to YouTube:

His complaints mirror many others: even when optimally connected to a wireless network, the latency between rings to notifications can exceed 15 seconds, leaving users with a video glimpse of nothing more than a visitor walking away.

Even worse, the video is unreliable and frequently freezes, drops frames, and blocks out details. The company claims it is working on these issues and will resolve them in firmware updates, but this leaves many feeling cheated out of $200 and looking for a refund.

Even with the disastrous execution, the future may be bright for Doorbot. Indeed, the Sharktank feature did not result in a backing offer, but the exposure has resulted in "a huge spike in interest" from both VC and customers alike according to the company.

Provided they successfully address the shortcomings in engineering, Doorbot could still be a winner. Direct competition is slim, with alternatives having similar problems or not yet shipping and still in fundraising stage.