Why Most Integrators Use the Same Techs for Video and Access

With so many differences between video surveillance and access control designs, how commonly do integrators train and employ technicians specially skilled in one area? Is the most common approach to develop technicans that can do anything, or is it smarter to avoid training techs to be 'jacks-of-all trades, masters of none'?

We asked over 80 integrators "Do You Use Different Technicians for Access Control than for Video Surveillance work?"  In this note, we break down their answers and color commentary.

When it comes to technicians, most integrators use the same employees to install and service both video surveillance and access control. Almost 3/4 of all integrators reported this is the case: 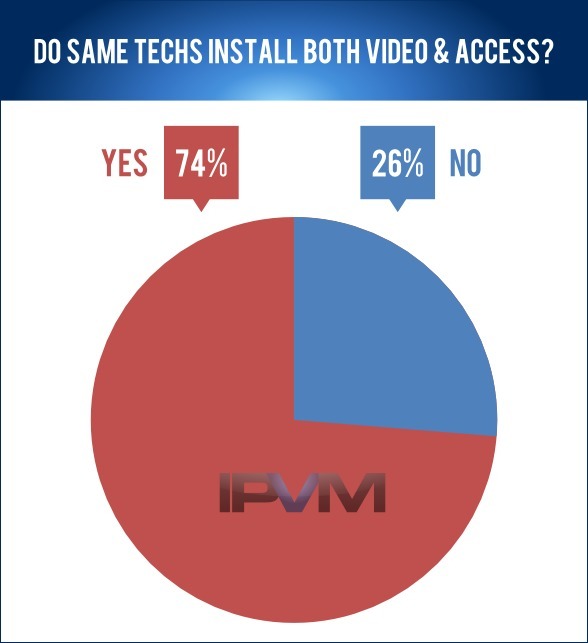 Most integrators train installers to competently work on both video and access, citing the benefits of assigning one technician to do either task. The majority of comments stated this flexibility is critical to operations:

Small Size is a Factor

While flexibility was cited as the key driver for combining skills, the small size of most integrators force the point. Many comments plainly stated that in order to get work done quickly and affordably for smaller firms, techs need to be multi-skilled:

The Case for Separate Installers

However, the flip side generally cited the increased complexity of access as the prime reason to use separate techs. The purely mechanical skillsets and craft experience access control requires lends itself to a different type of tech than those specialized in hanging cameras and optimizing NVRs:

While multi-skilled technicians are preferred, they are not easy to find and develop. While the ultimate goal is to have technicians generally capable of any task, the reality is that work is often planned according to the individual strengths of workers on the job.