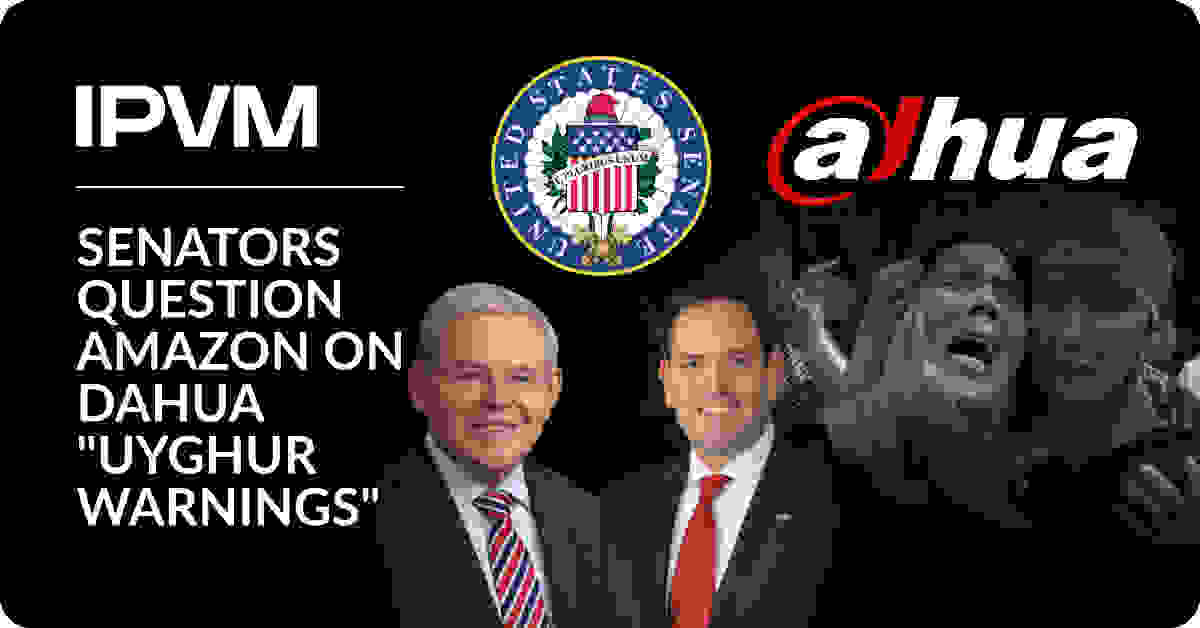 In a letter to Jeff Bezos, the Senators criticized that Amazon "willfully ignored guidance from the United States government and purchased equipment from an entity-listed company that is complicit in China’s atrocities against the Uyghurs.”

The letter also calls the 'Uyghur warnings' revelations "extremely disturbing", showcasing the risk of having any Dahua associations as the US government considers "transactions of any nature" with a sanctioned firm to be a "Red Flag".

Last summer, Reuters reported that Amazon had bought ~1,500 Dahua fever cameras in a $10 million deal for temperature screening in its warehouses. The purchase happened well after Dahua was sanctioned by the US government for human rights abuses against Uyghurs in October 2019 by being added to the 'Entity List'. 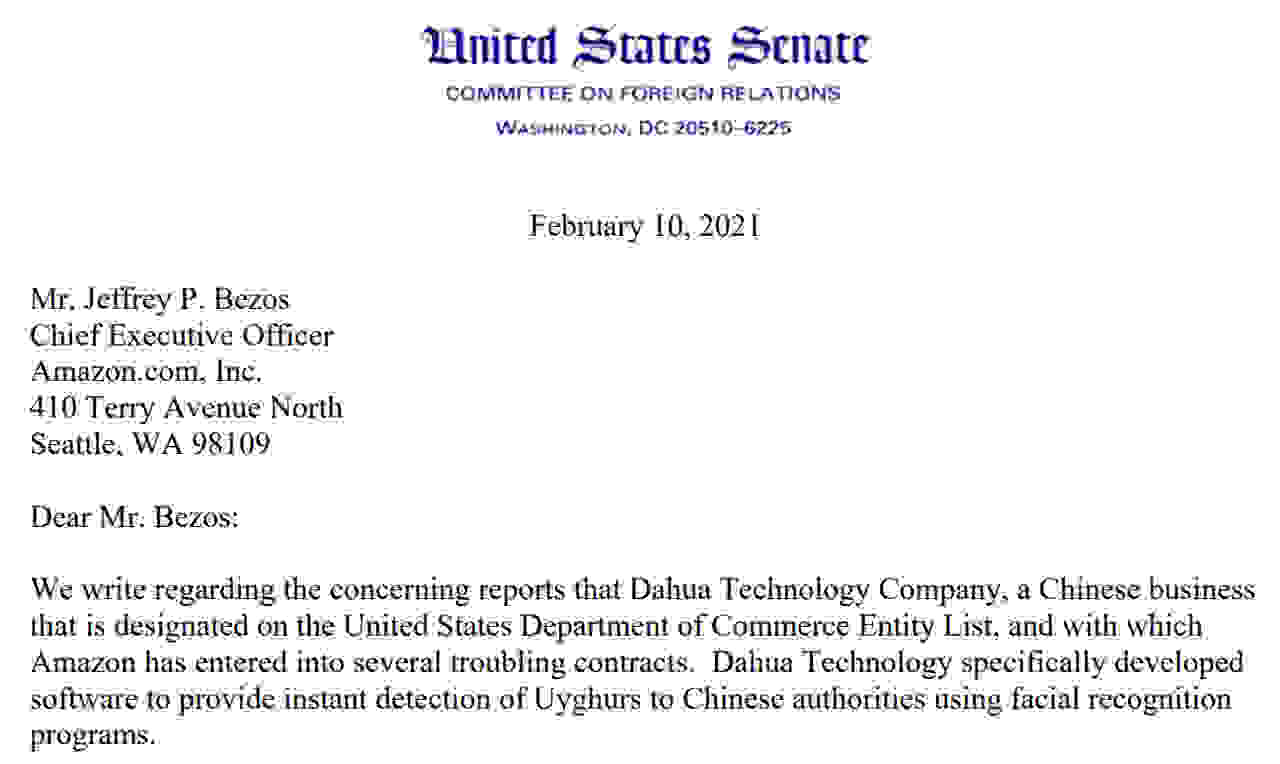 Last year, Amazon entered into a deal reportedly worth $10 million to buy 1,500 cameras from Dahua Technology, even though the U.S. Department of Commerce had already labeled the company as being “involved, or to pose a significant risk of being or becoming involved, in activities contrary to the national security or foreign policy interests of the United States.” If these allegations against Dahua are true, it would mean that Amazon willfully ignored guidance from the United States government and purchased equipment from an entity-listed company that is complicit in China’s atrocities against the Uyghurs [emphasis added]

When Amazon/Bezos responds to these questions, IPVM will update this article.

This letter is an important reminder that transactions with Dahua carries risk - indeed, as IPVM has already reported, the US government considers any transactions with an Entity Listed company to carry a 'red flag:

Risk to Dahua USA And Anyone Who Associates With Dahua

Dahua USA has continued to profit despite its October 2019 human rights sanctions, capitalizing on 2020's fever cam 'Gold Rush' (even before the FDA permitted it) with sales to big clients like Amazon and Six Flags (whose deployment violated FDA guidelines.) Moreover, IPVM testing revealed Dahua rigged those fever cameras.

Now, the revelation of Dahua's 'Uyghur warnings' and the resulting Senators' letter shows these sanctions risk impacting not only Dahua but those who do business with Dahua.

IPVM sent a similar set of questions to ADI, Bosch, and SIA. ADI is Dahua's largest North American distribution partner. Bosch continues to partner with Dahua for contract manufacturing and Dahua is a member of the Security Industry Association and one of SIA / ISC's largest exhibitors. We asked them for a response by the end of business tomorrow, February 12th. We will update this on Monday, February 15th with any responses or lack thereof.

Best Buy, Home Depot and Lowes Drop Dahua Lorex on Oct 25, 2021
Best Buy, Home Depot, and Lowe's dropped Lorex (Dahua) products after IPVM...
Amazon Responds to US Senators On Dahua on Mar 18, 2021
Amazon has responded to the US Senators who questioned its purchase of Dahua...
Bosch Investigates Dahua Uyghur Warnings on Feb 17, 2021
Bosch is investigating its supplier Dahua after IPVM and The LA Times...

Thank you for the work you are doing to expose this beyond the security world. It is important to get the word out as wide and as far as possible.

Generally speaking; some would say US senators have no place hypocritically calling out another hypocrisy-ridden company, considering the way they conduct themselves, pandering to lobbyists, ignoring their constituents, the people that should matter, looking out for their own interests, furthering their political existence for inexcusable duration's of time in office without limit. That said, many others might say "Amazon - shame on you for knowingly purchasing products from a Chinese business when you could purchase some other non-sanctioned country of origin's useless, malfunctioning fever cameras. What were you thinking?" The question may be asked -But don't we all purchase goods from China? Who here can say they are not currently purchasing "ANYTHING" at all that originated from them; not just technology, but ANYTHING? Try it sometime for a month. Be honest with yourself. Are people actually really and truly interested in change? Some would say the Senators aren't being or haven't been honest about "something" somewhere (and many, an absurd number of times) in their political and/or personal existence, so what gives them to right to call out another dis-honest entity? As a few may have said - "Ok, Amazon / Jeff, what were you thinking?" Maybe his reply could have been at a $180Billion+ (with a B) personal net worth "I don't really care; will enough people stop purchasing from Amazon over this to truly affect me, the board or the Amazon entity(s)...Will you, the US Govmt do anything about it? Of course not..you make the same choices every day..now look over there and go be distracted by something else.. I have other more important things to worry about...like lunch". Senators Joe & Blow may respond with - "Thanks Jeff; we'll go and attempt to figure out how to exist without purchasing ANY goods at all from China...(uhoh- we'll need to source vaccine vial materials and syringes from Venezuela now)... so they comprehend the serious nature of their actions, and atrocities against the Uyghurs [emphasis added]..well, maybe after we deal with this other natl-securitee threat-impeachment#2. But at least we looked good asking the tough questions".

Excellent article - Thank you for all of your time and efforts.

This is the best comment I have read in a loooong time. Nice write up sir.

Not every business in China is the same. I would wager the vast majority do not actively work with the government to imprison fellow citizens by alerting the police to their very existence.

Agreed. I think it's important to differentiate being in China and even having a business in China vs companies that develop product offerings for the police to oppress ethnic minorities.

Since using Dahua equipment is a violation of the NDAA shouldn't the DOD request the judge dismiss Amazon's attempt to overturn the $10 billion JEDI contract? It also has me wondering what other services does it provide to the federal government that are cancelable due to this violation?

I don't know but I would be surprised that Amazon is still using Dahua, given the issues with fever cameras, the issues with working with Dahua, etc. In other words, if I was Dahua, the easy response would be that they are no longer using it and therefore not in violation.

I'm not sure they could simply say "we stopped using them" without providing some proof. It also means there might be other Dahua equipment they are using as well.

As to EST cameras, while IPVM has done a good job of showing that they are expensive and don't offer a good ROI, we are still seeing regular requests for them, especially with many lower cost offerings. It's not the surge like last year but there still is demand, since we're limited to 510K cameras though we end up having to turn most of that work down at the moment since we don't have any inexpensive 510K systems onboarded yet.

"Bosch continues to partner with Dahua for contract manufacturing "

Is there evidence for this, or communication where Bosch admitted this?

Bosch has communicated to our company that Bosch lines are fully NDAA compliant, including a buyback of non NDAA compliant parts from distribution.

Yes, both statements are true. Bosch does not sell Dahua made products in the USA but they still do elsewhere in the world.

I would think this puts more pressure on Amazon and the US government to do what is right?

UPDATE: Amazon received the Senators' letter and is currently working on a response, according to a source close to the company.