With the surveillance industry shifting to IP cameras, important decisions still remain. Perhaps the most important is whether to use Standard Definition IP cameras or Megapixel IP cameras (such as 720p, 1080p HD, 3MP, 5MP, etc.). In the consumer market for TVs and digital cameras, this is an easy decision because very few, if any, SD products are even being offered. However, the surveillance market historically moves slower and more conservatively than the consumer market.

In this report, we dig into and answer each of these questions.

To do so, we have examined them from 3 different angles:

If you are deploying new IP cameras today, then statistically you are likely to be using MP IP cameras. Moreover, from a performance standpoint, this is overwhelmingly the right choice.

Here are the key points to take away from this analysis:

Let's start by digging into the integator's response to our survey question:

Clearly, a strong preference exists for using MP IP vs SD IP cameras. [It is important to note that this means 74% deploy a majority of MP IP cameras not that they are deploying 74% of MP IP cameras specifically. In the Winter 2012 survey series, we will do a follow up asking for the specific percentage of cameras deployed.]

First, let's start with the minority who are still deploying more SD than MP IP.

A few emphasized that their applications / markets where not really a good fit for megapixel.

However, the majority of those deploying mostly SD IP cited cost. Here are key excerpts:

Even amongst the integrators objecting to cost, 2 of those integrators make clear that this situation is changing.

Now, let's turn to the overwhelming majority who are deploying a majority of MP IP. Many of them emphasize how the cost has come down and is now very close to SD IP pricing:

Indeed, not only is megapixel attractive to integrators and end users, integrators made it clear over and over again that Megapixel is the key driver for IP adoption:

This feedback from integrators is particularly important because it shows how much the mindset of the market has changed in the past 3 years. While IP cameras have existed for more than a decade, only recently, with the broad release of H.264 Megapixel IP cameras has IP found its 'killer app'.

This is critical in re-assesing (1) sales forecasts and (2) market projections. In the past few years, IP and specifically MP IP sales have exceeded historical expectations. Indeed, we believe this will continue.

Manufacturer sales results are in line with what integrators are telling us.

The best public audited reference is from Vivotek's IPO documents earlier in 2011. Here's a chart demonstrating the shift towards Megapixel IP sales: 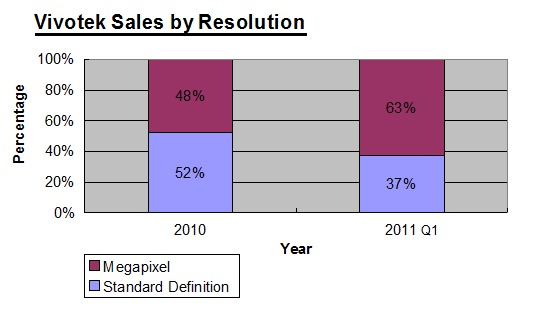 Even 9 months ago, MP IP represented nearly 2/3rds of Vivotek's sales. Equally importantly, the chart demonstrates the acceleration of MP IP sales growing robustly from less than half of 2010 sales. We have every reason to believe the shift towards MP IP continued in 2011 and Vivotek's sales are likely over 70% MP IP now.

Privately, we have heard the same trends from numerous big manufacturers including CCTV incumbents and traditional non megapixel providers (e.g., ACTi discontinuing most of its SD IP line, Sony moving to almost all MP IP cameras, etc.). Combine that with the megapixel focused companies who have been growing robustly (like Arecont, Avigilon and Mobotix) and it's no surprise that MP IP sales are clearly more than 50% and increasingly significantly each quarter. There's hardly any prominent manufacturer who has not refocused around MP - the only notable we can think of is Pixim who has really lost positioning in the market with strong WDR MP cameras becoming available from Sony, Panasonic, Pelco and soon Axis.

For a lively debate about MP IP market share, see the comments of our low cost IP camera comparison where we debated MP vs SD cameras sales.

Unit sales of MP IP cameras are easily 50% of total network cameras sold and may be closer to 60%. We expect that the transition in 2012 will continue, approaching 70% of units sold. By comparison, just last month IMS projected that it would take to 2015 for MP IP to reach 70%. This is far too conservative and reflective of many in the industry who have missed the sharp shift to MP IP in the past 2 years.

We believe the market is overwhelmingly making the right choice in moving to Megapixel IP. While there is definitely myths and potential misapplication ('replacing' PTZs, over dependence on super megapixel cameras, etc.), by large the practical benefits of Megapixel IP over SD IP are clear and pronounced.

The two key advantages we find in Megapixel IP over SD IP are:

Combine these advantages with a broad array of megapixel product options from nearly every manufacturer in nearly every form factor and there's not much in terms of limitations.

The most notable limitations are:

Overall, we see the main factor / application constraining megapixel adoption is low light sensitive applications. However, just like with black and white only cameras (used to improve low light performance), we see this as niche.