Who can see your cloud stored video? For at least one Vivint customer, the answer is complete strangers. An ongoing concerns of cloud-based surveillance is privacy and security protections in place to prevent unauthorized viewing. In this note, we take a look at one example where 'remote video' went wrong, the questions it raised, and what alternatives avoid the problem.

The report below details the surprise a 'Vivint Video' customer experienced when he logged into his VSaaS account and reviewed video clips. Several of clips available for him to view were segments recorded by cameras from other user's accounts. See the video embedded below for more details:

This screen cap shows an example of the 'bug', consisting of another Vivint Video customer oblivious to the fact that others can see what his camera is recording: 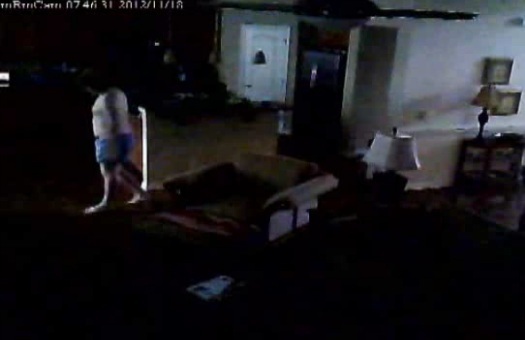 In terms of mistakes, this gaffe ranks among the worst possible missteps a VSaaS provider can make. While the root cause of the problem appears to be technical and not malicious, the fact the event occurred at all indicates significant shortcomings in how Vivint's 'cloud' handles the video.

In the clip, Vivint claims "this is the first time an event like this has been reported" and is investigating the issue in detail. Regardless of how widespread this particular issue proves, the customer detailed in the clip has been unnerved by the discovery, and lost confidence in Vivint's offering.

Adding insult to injury, the customer explains that he has repositioned his camera to disable their views, since Vivint "has locked him into a [service] contract" and he must "still pay for a security service he cannot trust". While unsatisfactory to most, this response is inline with both Vivint's sordid customer service reputation and the alarms industry in general that frequently requires multi-year monitoring contracts with punitive early termination penalties.

While 'hosted' service vendors downplay this situation from being possible with claims of 'bank-grade encryption' and 'accessible only by your password', it remains an inherent risk to most cloud-based platforms. As the situation above reveals, even password protected accounts and equipment can malfunction and allow 'your' video to be seen by others.

Aside from public-facing access, support engineers and administrators usually always have (and periodically may even require) visibility of recorded video and customer data. In terms of account support, troubleshooting, and maintenance having 'master access' means that no video data is 100% exempt from being viewed by others. Even when only a 'potential' issue, the risk of unauthorized viewing can be a deal breaker for VSaaS - often excluding it from high-security/surveillance applications.

Many customers choose to avoid the risk of situations like the above by simply avoiding VSaaS products. Others withhold serious consideration of the platforms until privacy and security of remote video can be absolutely assured - something that is not be possible. Until the time, we expect appliance based NVRs, VMS enabled NAS appliances, and small VMS servers to remain the preferred option for many end users. "Remote Accessibility" of video is becoming increasingly less difficult even with the full physical retention of all recorded video onsite.