In our continuing series analyzing real-world surveillance video, in this note, we examine footage from a recent school bus accident in Florida, in which more than two dozen student passengers, as well as the bus driver, were injured. This extremely dramatic video shows the moments leading up to the collision, and the immediate aftermath.

We see three issues with the video captured (or not captured) from this incident.

The first thing viewers will notice about this video is that it switches back and forth between the two interior cameras at an extremely fast rate, approximately twice per second. This is an older method of recording multiple cameras, instead of recording each channel independently on a multiple-input DVR. The net result of this is that the video is very difficult to watch, with the scene changing between front and rear cameras so quickly.

If you look carefully, the images from the two cameras actually "ghost" over one another, as can be seen here: 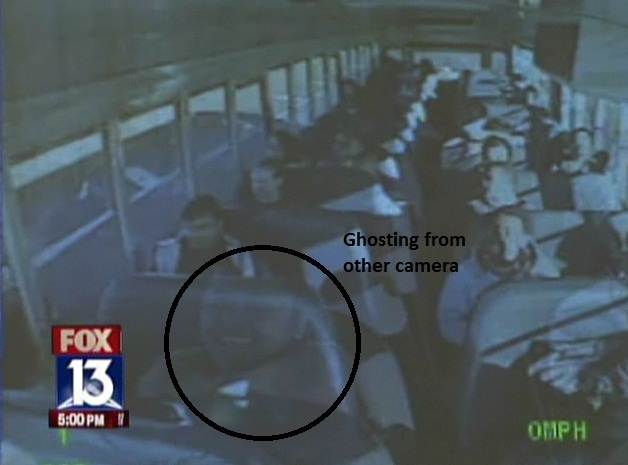 In addition to the fast switching time, the interior of the bus is poorly covered by the existing cameras. The bus driver is essentially completely out of view, making it difficult to assess his actions during the incident, and causing investigators to rely on eyewitnesses to confirm the circumstances of the crash. Cameras are not of the highest quality but provide acceptable video of activities in the bus. In the case of school buses, where passengers are known, identification-quality video is not as important, as the front camera captures detailed views of subjects as they enter the bus.

The arm in the video below is the only footage of the bus driver prior to the collision: 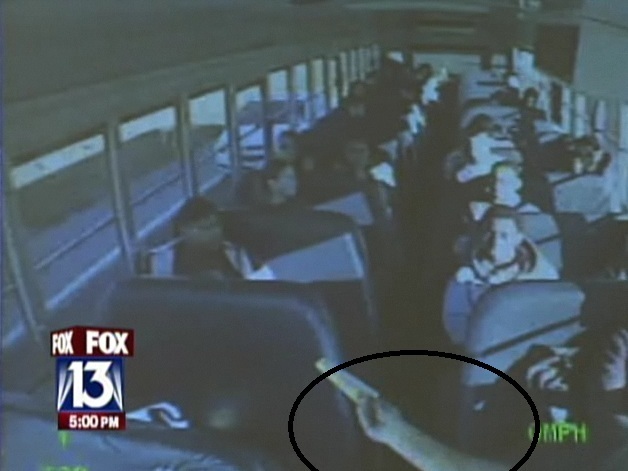 The lack of any cameras on the outside of the bus leaves investigators without any record of exterior conditions during the collision. In this case, the front of the vehicle is the area of importance, but in some mobile recording applications, cameras are installed watching either side of the bus, as well as the front and rear, in order to view passengers entering and exiting the bus, as well as to provide footage of any collisions which may occur.

With all the above issues in mind, we suggest the following improvements be made: