We bought one of these models, the QNV-7080R, to see how it stacks up against 4MP competitors from Axis and Hikvision in full light, low light (below), WDR, bandwidth, and more. 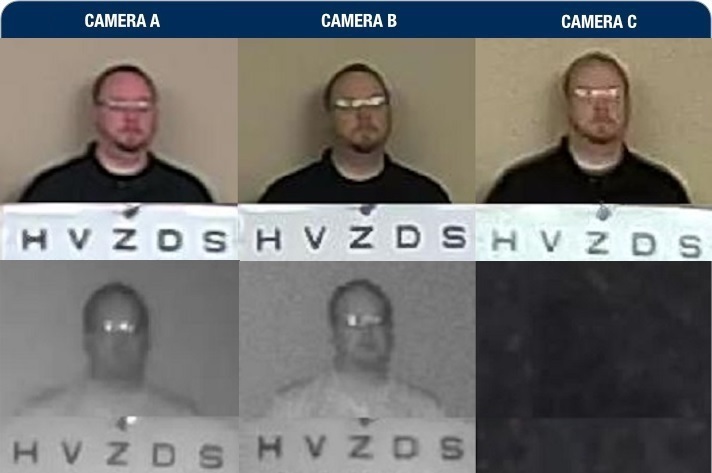 In this test, we share our results of the 4MP QNV-7080R, a 4MP outdoor motorized zoom model, the highest end dome in the Wisenet Q line. Users should also see our tests of the low end 1080p QND-6010R as well as Wisestream Smart Codec/H.265 performance.

The 1080p Q QND-7080R is competitive in price and features with other 4MP zoom models such as the Hikvision 2742 tested here, with moderately better image quality in low light. However, in our tests, WDR performance was relatively weak against strong backlight, with image artifacting reducing details, not the case in other models tested.

This is a solid alternative to Dahua/Hikvision 4MP models, especially where low light, not WDR, is the main concern.

The QNV-7080R sells for ~$350 USD online, slightly higher than 4MP motorized zoom models from Dahua and Hikvision, both ~$300 online. Note that Axis offers an outdoor 4MP IR model, as well, the M3106-LVE, which sells for ~$450 online, but does not include a motorized/varifocal lens.

We review the physical features of the QNV-7080R in this video.

We tested the QNV-7080R against 4MP models from Axis and Hikvision to see how they perform in this interior field of view: 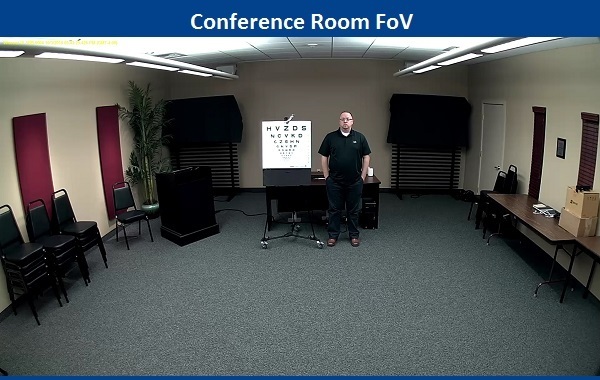 With PPF at ~88, details are similar between all three cameras, though lower lines of the test chart are washed out in the Wisent Q and Hikvision cameras. 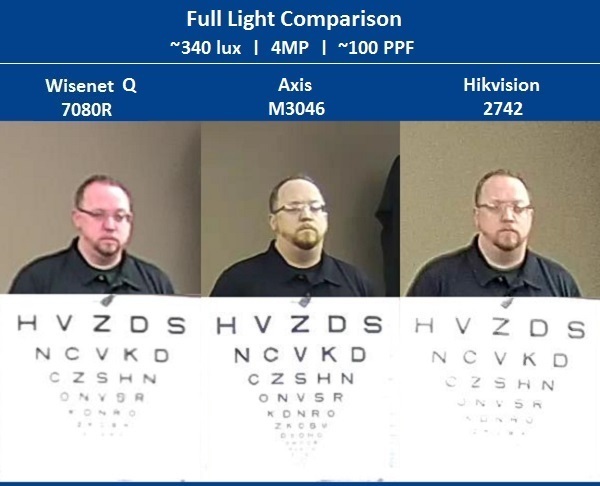 With PPF lower, ~50, again, details are similar between all cameras. Text is noticeably less clear in the Wisenet Q model compared to the Axis M3046, even though cameras were autofocused then manually adjusted for best focus. 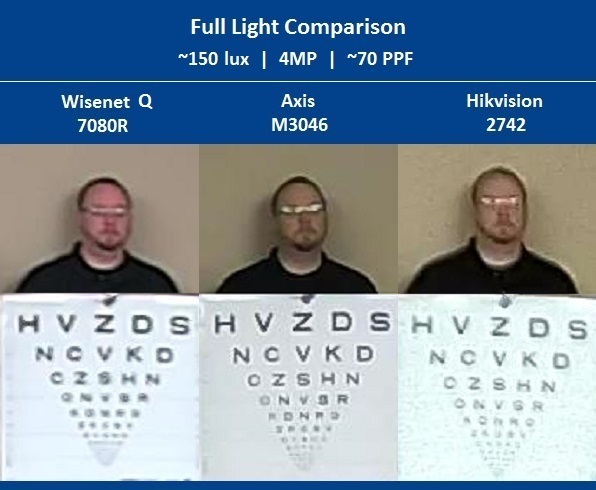 The Wisenet 7080R produced the best low light images of cameras in this test, with slight increases in subject detail and more legible lines of the test chart, with less overexposure.

Note that the non-IR Axis M3046-V was used in these tests as the integrated IR 4MP M3106-LVE model was not shipping at the time of testing. 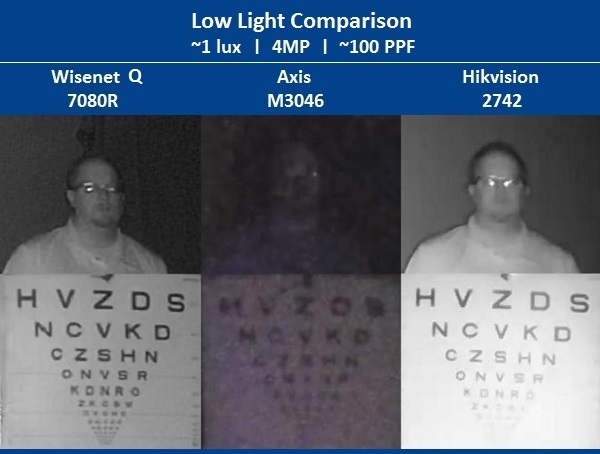 At lower PPF, ~55, the same is true, with more lines of the test chart visible and similar details of the subject. 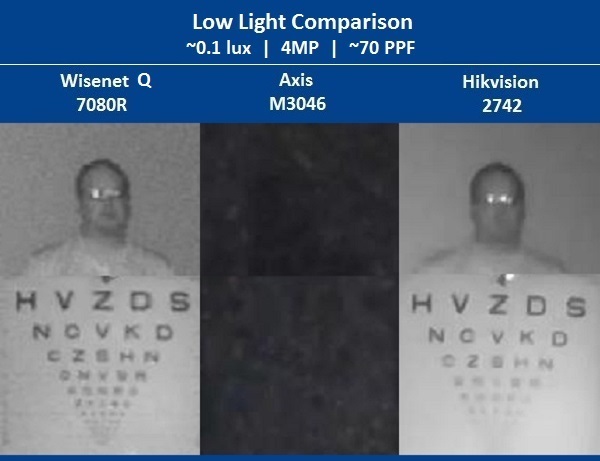 We tested WDR performance against an open overhead door and dark interior area, shown below: 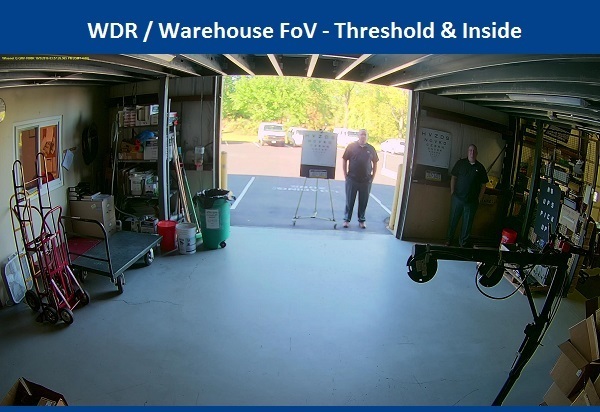 Against the backlit region of the scene, the 4MP Wisenet Q 7080R appeared moderately washed out and blurry, despite focus being adjusted. In the darker area of the scene, performance is better, with more even details of the subject than other cameras. 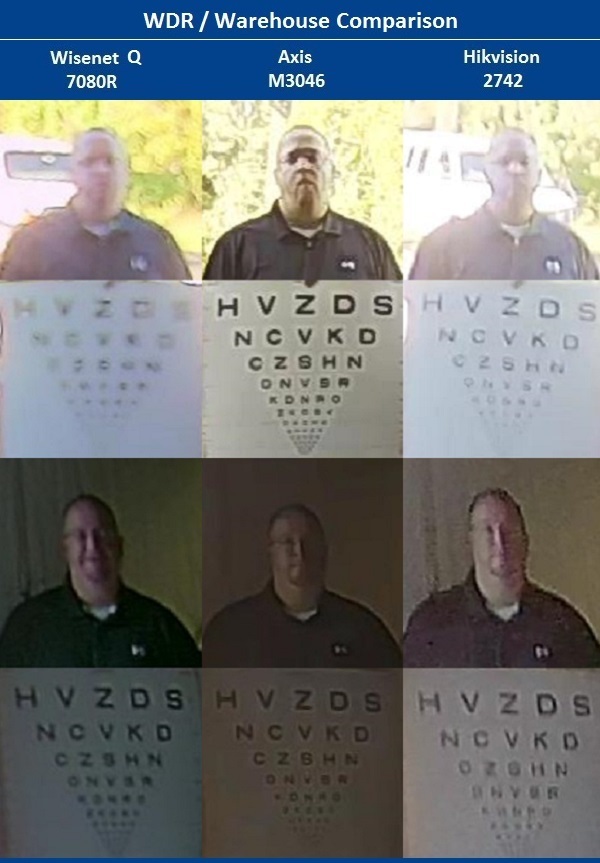 VBR Is Not VBR 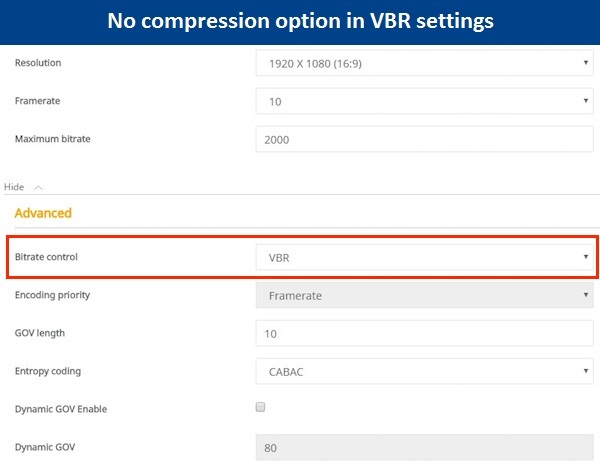 Since the Q does not include any means to fix compression, we adjusted quantization by changing the camera's bitrate cap in a given scene until it averaged ~28 Q according to our measurements (see How to Measure Video Quality / Compression Levels). In well lit scenes, this was ~3 Mb/s, slightly higher in dark scenes.

The Wisenet Q camera had the lowest daytime bitrate of any camera in our test by far, though the Hikvision 4MP model was ~1 Mb/s lower at night with IR enabled. 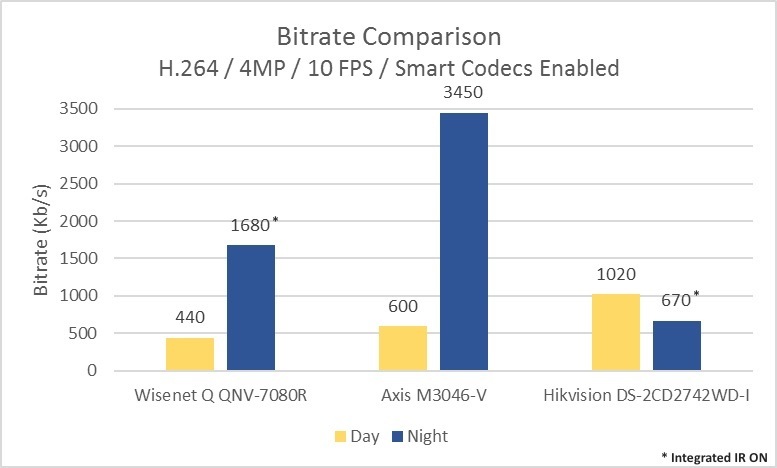 Note that this camera also includes H.265, though it is currently unsupported by the vast majority of VMSes. We review this and other Wisenet Q/P cameras' H.265 performance separately in our Samsung Smart H.265 Test.

The Q series ships with Hanwha's updated web interface, which most notably includes cross browser support The new Wisenet web interface works in all web browsers, while the past Samsung Wisenet interface required ActiveX for both live viewing and configuration. Oddly, the web interface varies depending on which browser is used, with the new interface shown in Chrome, Firefox, and Safari, while IE displays the older style interface.

Note that this web interface is also responsive, and usable on mobile phone browsers as well as PCs (MJPEG streaming only).

Aside from these changes, much of the web UI is laid out in the same order/menu structure as the old version. Note that only the Wisenet logo is shown, not Hanwha nor Samsung.

Hanwha Low Cost NDAA-Compliant Cameras Tested (L Series) on Aug 03, 2021
Hanwha's NDAA-compliant L Series competes against Dahua and Hikvision but how...
Best Alternatives To Dahua and Hikvision on Nov 09, 2020
With the NDAA ban in effect and human rights sanctions against Dahua and...
Mobotix Releases 'Move' Into 21st Century on Jun 20, 2018
For years, Mobotix stood resolutely against, well, every other manufacturer,...
Hikvision Fails To Fix Unsafe Browser Plugin on Mar 21, 2018
More than 2 years ago, Hikvision committed to resolving the use of unsafe and...
Comments (1) : Subscribers only. Login. or Join.