Officially, Samsung Techwin is no more.

As the Korea Times reported:

However, the American division tells IPVM that:

Is every security camera sold worldwide* that has Samsung on the label therefore made by Techwin now?

My understanding was that "security cameras' had previously come from Samsung Techwin anyway, not Samsung Electronics or Samsung corporate.

What's your point? What are you getting at?

I though that Samsung Electronics had a line of consumer security cameras, that were branded only "Samsung". I didn't know that Techwin made them.

Either way, the name agreement means that Samsung is effectively blocked from selling self-branded security cameras, lest they confuse everyone.

"that were branded only "Samsung"

Well, that's a technique Techwin has used for years for most of their cameras / promotions. Even on cameras that are clearly professional, they try hard to not show / de-emphasize the 'Techwin' part. They are not stupid, eh :)

As for the consumer cameras, the most recent / notable is the SmartCam. While the product branding is all 'Samsung' only, they do list Techwin in the footer and on the contact page.

The SmartCams are part of Techwin.

Samsung Electronics DID have a line of security cameras many years ago. The lines were consolidated years ago to avoid confusion. I believe that is also when Electronics invested in Techwin and purchased stock, which was just sold.

The line of cameras/DVRs that you see at Walmart, etc. are Techwin products. They have a seperate website and support number from the professional security products.

Right. So again my point is that, in addition to selling/licensing Hanwha the brand rights, they are effectively limiting their options to sell in to the security space in that time period as well, branded as "Samsung", at least.

Which for a year or two transition is no big deal, but the way Techwin makes it sound it could be long term, possibly leaving a hamstrung Samsung.

The SmartCam is a good example of this. No doubt an engineering group at Samsung Electronics thinks they could drop kick Dropcam to the curb with an in-house design. But what would they brand it as? WhaWha BabyCam?

Check out the products at cctv.hanwhatechwin.co.kr

The color and the name looks more chinese now.

Another addition of confusion to Samsung branded security products.

Fascinating, thanks for sharing. That website was only established a little over a month ago, according to the domain's WhoIs record. Looks like they copied most of the Samsung Techwin website, replacing it with their logo. 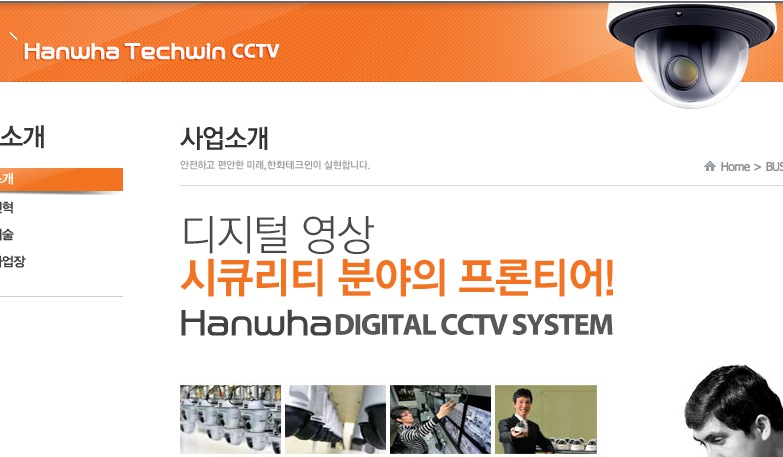 "The Hanwha Group took over a 32.4 percent share of Samsung Techwin, being the company’s largest shareholder, securing management rights."

The actions throughout have made this obvious, but it is worth emphasizing. The former Samsung Techwin people had made a big people about how this was just a stock trade or an investment. They are wrong or lying. Hanwha clearly is managing Techwin now, just like Samsung, whom they bought it from, did before.

Now the only way to work for Samsung Techwin is to leave Korea.

If you get kicked out of Harvard Seoul National University, can you fairly tell people you went there?

Basically, Samsung Electronics would get exclusive rights to OEM Hanwha. Why not?

Well, let's see how Hanwha manages the Techwin for a year or two....

Samsung Techwin America is not part of the Samsung Group anymore. It maintains the name only. Hanwha Techwin may have a brandname licensing agreement with Samsung for a year or two for the international market just like UTC which acquired GE's security product business and used GE's brandname for some time years ago. (Now UTC uses Interlogix name for those products)

All the international business of Samsung Techwin as well as its Korean domestic business is fully under control of Hanwha Group, who took over the controlling share from Samsung, as the deal was closed.

In my opinion, the possibility of Samsung Electronics taking over Techwin's international business is NONE as it has divested non-core business areas, selling its security products to Samsung Techwin's lines.

Hanwha Techwin may have a brandname licensing agreement with Samsung for a year or two for the international market.

The actual terms and duration of this agreement are important here. IF Samsung is merely granting Hanwha a non-disruptuve grace period to transition branding away from the 'Samsung' label, then I agree with you that there is little incentive for the Samsung group to do anything.

But I'm not aware of any credible reports regarding the scope or terms of this agreement, are you?

If on the other hand a long term > 10 yr agreement was negotiated, AND Techwin prospers, the Samsung group may well consider buying back the international brand management in 5 years, so as to be in control of the all of their related marketing assets.

For Samsung, Techwin's video surveilance equipment business including its other lines such as defense products was considered as non-core and peripheral. These are why Samsung divested its stake in Techwin to Hanwha. Samsung Electronic's focus is on smart phones, memory chips, healthcare, ultra HD TV's to name a few.

There is zero possibility for Samsung to re-enter Techwin's video surveillance field. Techwin is now part of Hanwha Group companies and will remain so for years to come.

For Samsung, Techwin's video surveilance equipment business including its other lines such as defense products was considered as non-core and peripheral. These are why Samsung divested its stake in Techwin to Hanwha.

It's been peripheral for years though right?

So what caused Samsung to decide that NOW is the time to divest it's stake in some of its non-core businesses?

No doubt it's partially because of S.E. smartphone slump. On the other hand, it's also likely to be a matter of succession.

As I'm sure you are aware the Chairman of Samsung, Lee Kun-hee, has been in a coma for over a year now. His heir apparent, Jay Lee, was already being primed for the job before the elder Lee's stroke, but after, due to his his Father's grave condition, the family was maneuvering quickly to reorganize parts of the chaebols holdings to insure the proper ownership of the numerous subsidiaries and to minimize inheritance tax liability for the Lee children.

So many moving pieces makes it difficult for investors to keep up. Yet the family’s ultimate goals are clear: To consolidate control of key businesses, most notably Samsung Electronics, where the family has a direct stake of less than 5%, and to raise money to pay an inheritance tax bill in the billions of dollars.

In short it would seem the family has a bill to pay and hocking Techwin was one of the ways that used to to raise money in anticipation.

In 5 years when power is consolidated, and it grates on Jay's ears to hear about a Samsung that is not his, he could decide to take it back. Maybe not likely, but a bit more than 'zero' chance, no?

And It would hardly shock anyone if it did happen, except maybe you. :)

I don't know about the inheritance planning as well as you do. Feel free to keep on dreaming it. But it won't come true.

Feel free to keep on dreaming...

How about Chairman Lee Kun-hee comes out of his coma, and reads the news and says to his son "Techwin? You sold Techwin??"

Update: A Korean news report says that Hanwha Techwin will lose the Samsung brand for surveillance products in 2017:

"Samsung has allowed Hanwha Techwin to use the Samsung logo on its security related products until 2017."

It will be interesting to see who is wrong / lying here. I wouldn't expect Hanwha to lie here, I also would not expect the Korean Times to be completely wrong about such a report.

Ok, it "was not issued by the company." Fine, but no one says it was.

Then, the "item...is not valid." What exactly is not valid? The communication or the content? Not valid because is wasn't an official company statement?

Again, why such weird language instead of "We have an agreement until 2020, which we intend to renew."

Look for this agreement to expire June or Oct 2017, 2 years.

I responded to Hanwha Techwin:

"To clarify then, what is the terms of the current brand agreement? You
say "for years to come." How many years specifically?"

"I believe our statement is quite clear."

So it could be their spokesperson is just unclear or that he is hiding something. I do think there is more going on behind the scenes. We will have to wait to see how it all develops.

Notice how they identify their parent corporation in $, but not by name. I wonder why?

They are seriously scared of becoming Hanwha...

How does Samsung become Hanwha? Little by little. 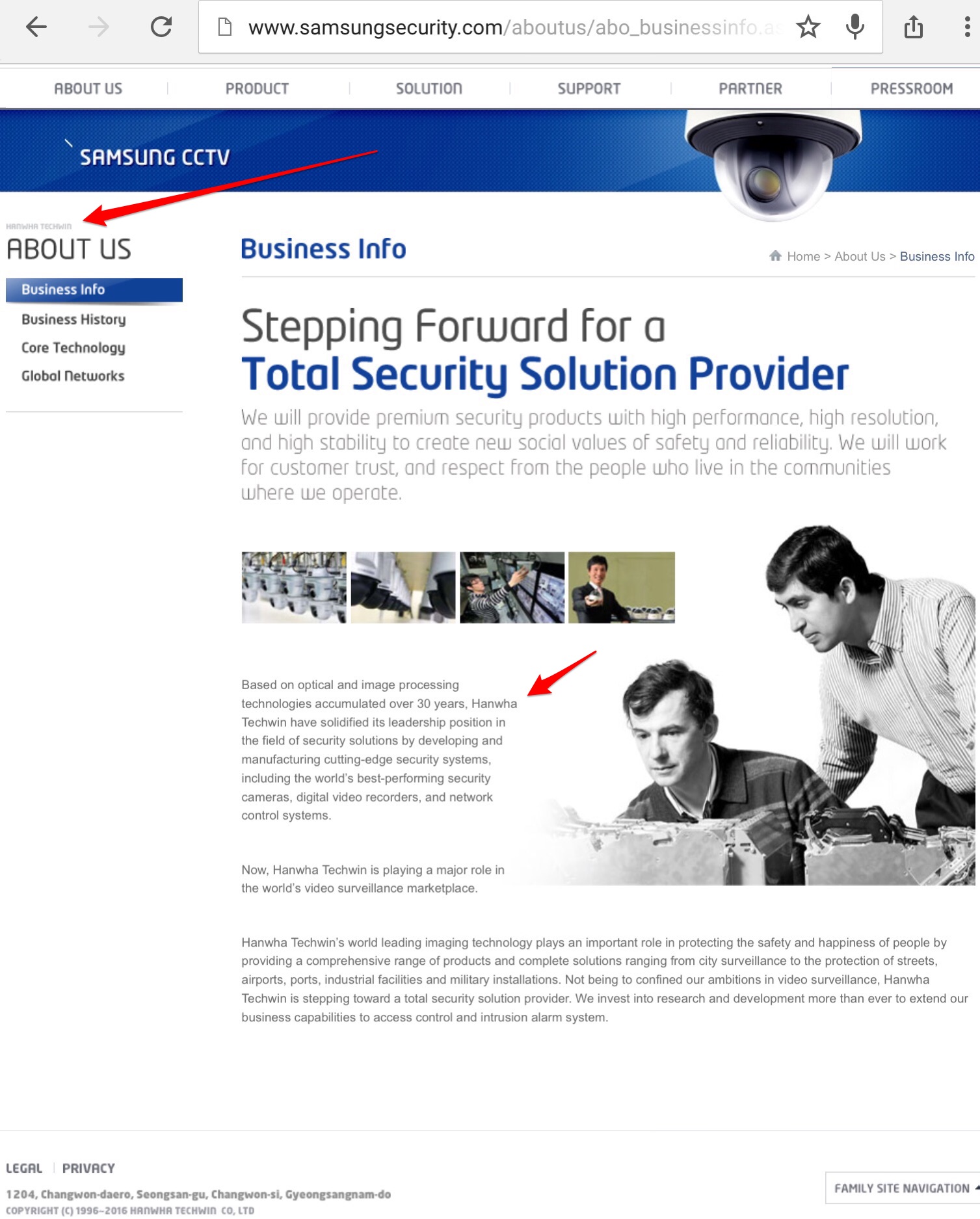 That appears to be from the HQ site: http://www.samsungsecurity.com/aboutus/abo_businessinfo.asp

Compare to the America site / version: https://www.samsung-security.com/SamsungHome/company/about.aspx which has no Hanwha mention whatsoever.

Yes, a hyphen can make quite a difference. So in Europe it's ok to let everyone in on the secret, but the U.S. would freak out?

Reminds of how in Europe, the EZVIZ and Hik relationship is not hidden, but here, no mention.

Maybe the deal was a blessing in disguise for Techwin after all?

Samsung Group chief Jay Y. Lee was arrested early on Friday over his alleged role in a corruption scandal that led parliament to impeach South Korean President Park Geun-hye, dealing a fresh blow to the world's biggest maker of smartphones.

The 48-year-old Lee, vice chairman of Samsung Electronics Co Ltd (005930.KS), was taken into custody at the Seoul Detention Centre, where he had awaited the court's decision following a day-long closed-door hearing that ended on Thursday evening.