So far, the 'Chinese' have been leading the way here.

We bought two of these 1080p cameras, the Samsung SND-L6083R varifocal dome and SNO-L6013R fixed focal bullet to see how they compare to low-cost competitors and Samsung's own Wisenet III line, including:

We tested the cameras in interior full light: 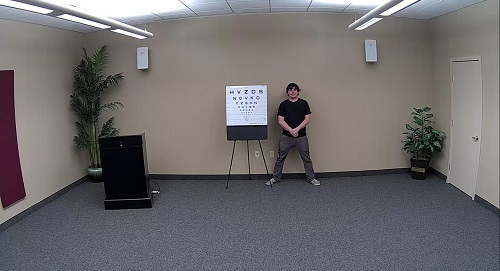 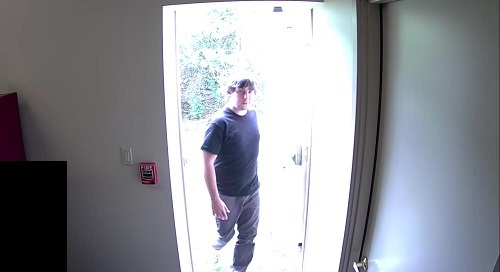 Pricing on the Wisenet Lite cameras tested is as follows:

This is competitive compared to models from Hikvision, whose 1080p bullet models typically sell for ~$150-160 online. It is moderately higher than Dahua, whose HFW1200S 1080p bullet can be found for as little as $90-100 online. However, Samsung product is readily available through distribution in North America, whereas non-OEM Dahua models are not.

The Wisenet Lite series is competitive in price with low-cost leaders Dahua and Hikvision, while providing moderately better image quality and IR illumination. These factors, combined with Samsung's strong brand, make it a strong competitor in the low end of the market.

The most notable difference physically with the 'Lite' cameras is that they are both constructed of plastic throughout, instead of the cast or machined aluminum typically used, especially in bullet models. Though both are IK8 rated, some integrators may prefer the metal housings of competitors.

The web interface of the Lite series is essentially the same as the Wisenet III line, with most options similar and in the same location.

However, users may not control image quality/compression as they can in that line, and the camera's default H.264 profile is limited to a max VBR cap of 4 Mb/s and an I-frame interval of 5, with no way to increase these settings. Users may create a new profile which allows access to these settings, but VMSes may see this stream as a substream instead of the main stream, even when marked in the camera as default.

Though IR illumination was overall even, with no hotspots, both the dome and bullet cameras had reflectance issues which had slight negative impact on image quality.

In the bullet camera, illumination reflected off of the camera's sunshield, seen in the image below. This reflection was visible no matter how far back or forward the sunshield was moved.

In the dome camera, IR can be seen reflected by the inside of the dome, seen in the image below.

First we tested image quality against competitive models indoors, in the approximate field of view seen below. Note that slight differences in FOV were present due to differences in fixed lens models' angle of view. 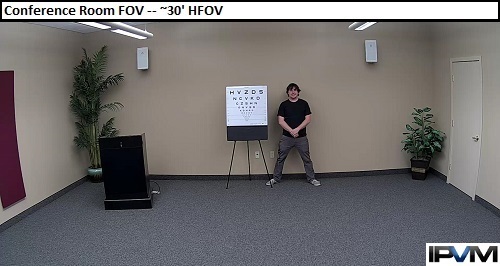 In full light, ~160 lux, the WiseNet Lite cameras performed similarly to other 1080p models, slightly more evenly exposed than models such as the Axis M3006 and Hikvision 2032. 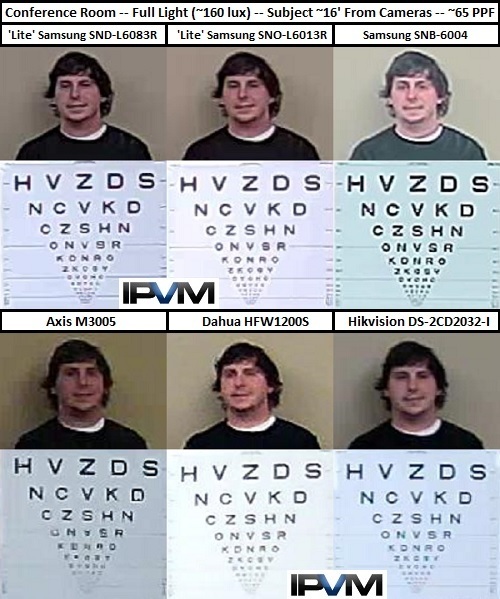 With lights off, ~0.01 lux, the Samsung cameras are more evenly exposed than the Dahua and Hikvision models, with better details of the subject's face and test chart. Both provide better video than the non-IR SNB-6004, which shows only 2-3 legible lines of the test chart, and the Axis M3005, which is simply black at this light level. 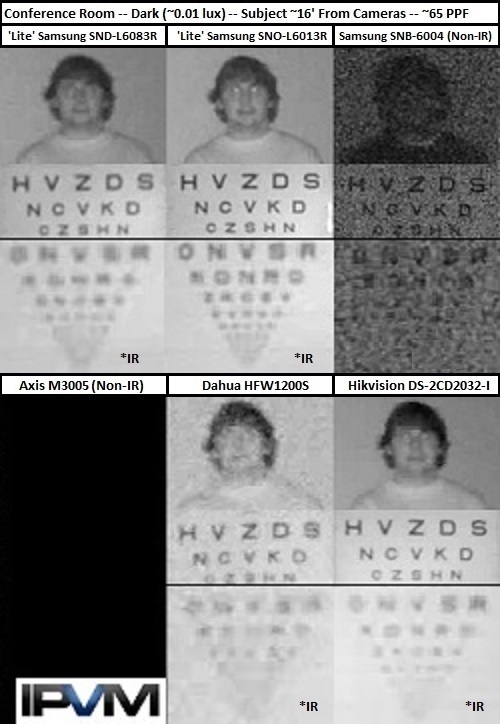 We tested the cameras in a WDR scene, with our subject entering a door with strong sunlight outdoors, seen here: 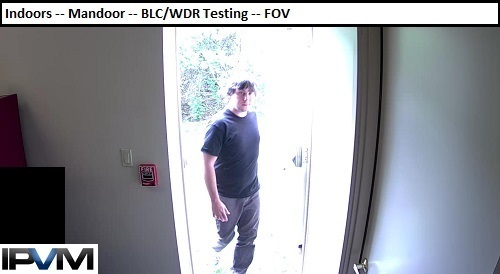 The Wisenet Lite cameras were better in this scene than all cameras tested except the SNB-6004, the only true WDR camera in this test. Details of the subject are clearly visible as he enters, while the sunlight causes severe shadowing in the Axis, Dahua, and Hikvision cameras. 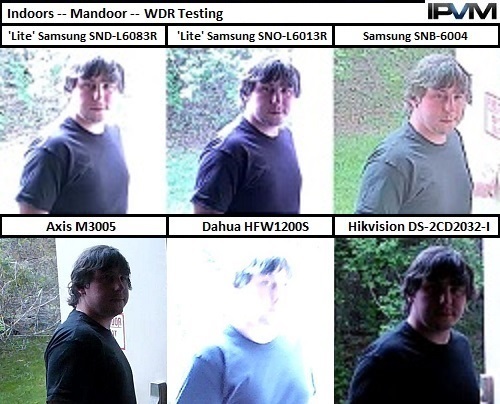 The Wisenet Lite models' bitrates were typically 40-50% of the maximum bit rate set in their encoder profile settings. Even in low motion scenes, bitrates did not dip below these levels.

Since the Samsung Lite cameras offered no way to explicitly set compression, we found that adjusting the VBR cap up or down allowed us to set the camera to the desired average Q level. In our scenes, a 5 Mb/s cap resulted in 27-28Q, similar to competitors when standardized.

The Wisenet Lite cameras defaulted to an average compression of about 32-33 on the quantization scale, with no way of adjusting it. Using these settings, bitrates were similar to other cameras in full light, and lower in the dark with IR on. 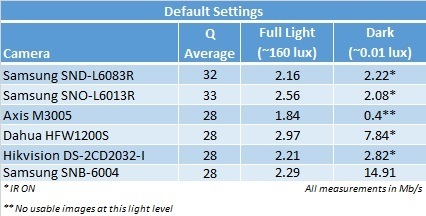 Adjusting the VBR cap upwards reduced average quantization to ~28. Using these settings, bitrates increase moderately, above other models (aside from the Dahua HFW1200S) in daytime, though still lower than all but the Hikvision 2032 at night. 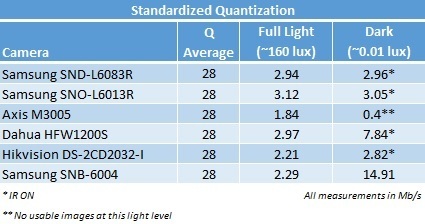 We tore down both cameras to see what chips were in use on these low cost models.

On the SNO-L6013R, the imager is visible after unsnapping four tabs and removing three screws. No markings are visible, however: 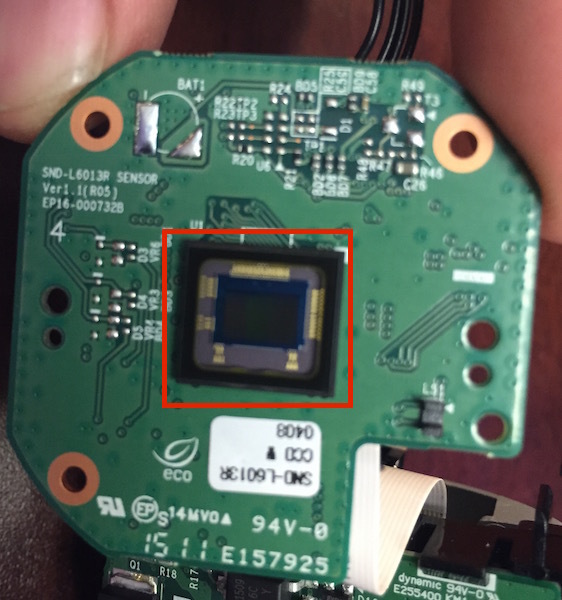 Tearing the SND-L6083 down, we can the camera's SoC (system on chip), a HiSilicon Hi3516. Also visible are a Samsung DRAM chip and a chip manufactured by Spansion which is illegible due to text printed over top of the chip markings. 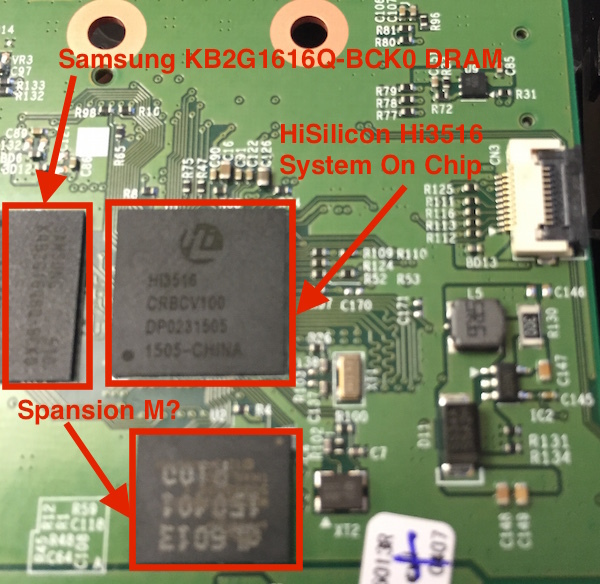 Goodbye Samsung, Hello Wisenet X on Jan 23, 2017
Samsung is gone but Hanwha is back. Their latest generation Wisenet X [link...
Samsung 'Q' Low-Cost 1080p Dome Tested on Oct 10, 2016
The most competitive part of the market is for low-cost cameras. Hanwha...
Samsung Losing Its Name and Integrity on Mar 04, 2016
Samsung's video surveillance division told everyone that nothing was going to...
Top Manufacturers Gaining and Losing 2015 on Dec 02, 2015
100+ integrators told IPVM what products they are selling substantially more...
Hikvision Trojan Mobile App on Sep 22, 2015
With a vengeance. The last time, the industry mostly shook it off. This...
Chinese IR Camera Dominance on Jun 02, 2015
When contrasting 'Western' and 'Chinese' camera manufacturers, cost is the...
The New Post-Milestone OnSSI Tested on Jun 01, 2015
OnSSI surprised the industry earlier this year by acquiring rival VMS company...
The $100 MP Era is Here on May 13, 2015
The video surveillance industry has entered a new era. This era is...
Comments (5) : Subscribers only. Login. or Join.