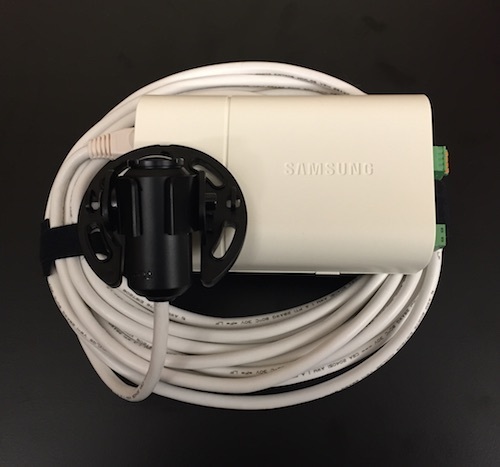 IPVM member Steve Beck asked us in IPVM chat to test the Samsung covert WDR camera (the SNB-6011) so we did it.

Covert cameras are often used in ATM applications, locations with demanding dynamic range needs. However, as we saw in our Axis MP Pinhole Shootout, these cameras are often poor in these scenarios, with subjects washed out.

As part of their Wisenet III line, Samsung has introduced the SNB-6011, claiming the same 120 dB WDR found in the rest of the line, top performers in our shootouts.

We bought one and put it to the test to see how it performed in WDR, daytime, and nighttime scenes.

Based on our tests, the SNB-6011 WDR covert camera provides better WDR performance than previous covert models tested, and beyond that of standard low cost models such as Hikvision or Samsung's own Wisenet Lite.

Low light performance (below 1 lux) was poor, with no usable details of the subject or test chart.

Low light bandwidth was much higher than low cost bullet cameras tested, ~6 Mb/s vs. 1 or lower, due to the lack of integrated IR and a high F stop F2.0 lens.

For covert applications, the Samsung SNB-6011 offers the best WDR performance of cameras we have tested, at a price similar to other non-WDR or lower resolution models.

The SNB-6011 consists of a main unit and camera unit connected via a 8m/~26' cable, very similar to the Axis P12 covert series. We review its construction and compare to the P12 in this video:

It includes a plastic mounting bracket with double stick tape or screw mount. The image below shows the camera head in this mount compared to an Axis M30 minidome for size comparison. The SNB-6011 is notably smaller: 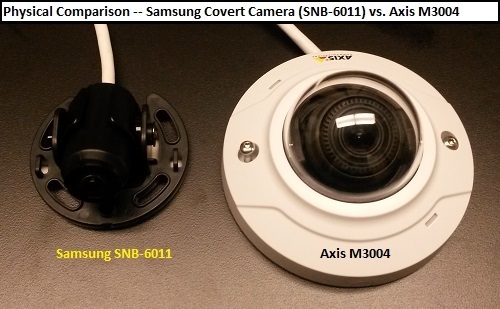 The SNB-6011's web interface is nearly identical to other Wisenet III cameras. We have included the configuration overview from our Samsung Wisenet III Camera Shootout for reference.

We tested WDR in our standard test scene, against strong sunlight through an open overhead door, in the FOV seen here. 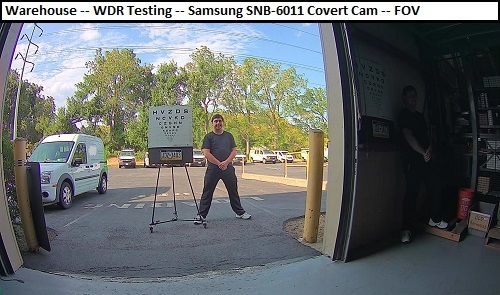 The image below shows our subject close to the camera in this scene (~2'), similar to typical covert applications such as ATM lobbies. The subject is clearly visible, as is the dark area to the right side, as well as the brightly lit background behind him. 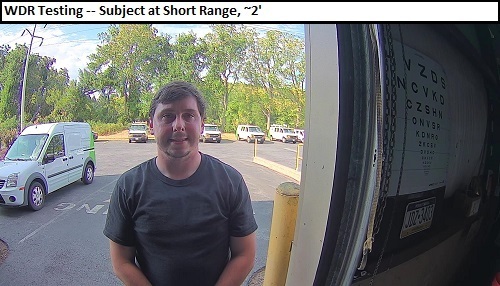 The SNB-6011 outperforms the Hikvision and Samsung Wisenet Lite cameras in this scene in both light and especially dark areas of the scene, with better details of the subject and test chart.

Note that our subject looks more angled in the dark side of this scene due to the camera's very wide FOV creating a much higher angle of incidence than the standard models. 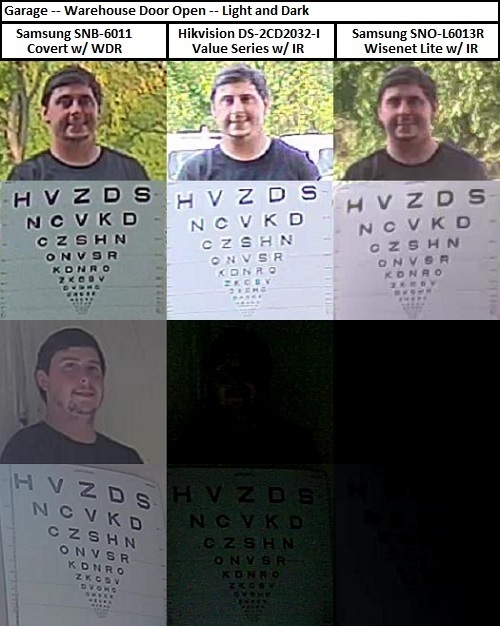 The SNB-6011 has a very wide 130° angle of view, show in this overview shot from our indoor tests. 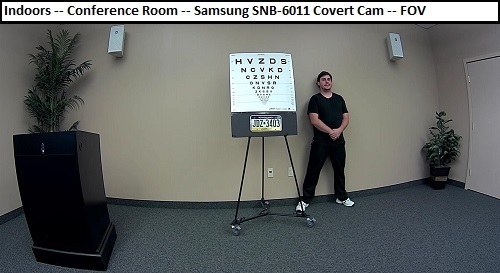 This wide angle results in some image visible image distortion, but with no practical negative impact. 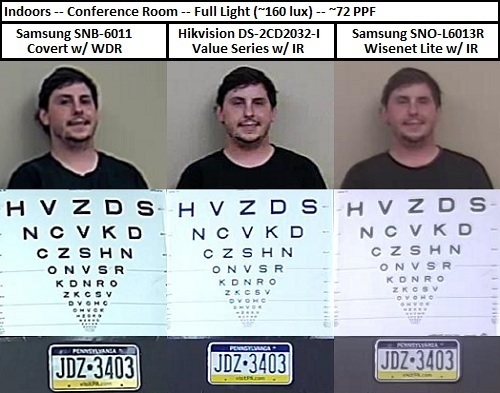 In low light, under 1 lux, the SNB-6011 performs poorly, with detection of our test subject and chart but no usable details. Note that the SNB-6011 is not true day night, only software/electrical. 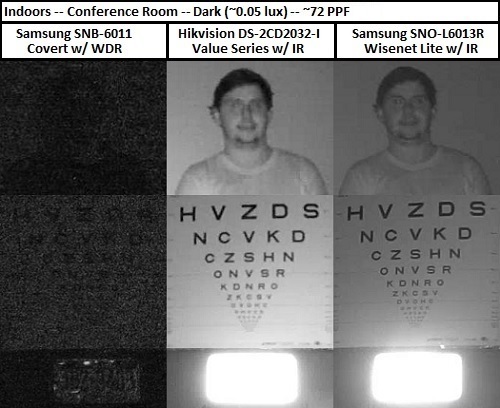 The SNB-6011 had the highest bandwidth consumption of cameras in this test, nearly double the Samsung Wisenet Lite model in full light. In dark scenes, bitrate is much higher due to the lack of integrated IR.

Notably, the SNB-6011's bandwidth consumption in full light is much higher than its Wisenet III 1080p box counterpart, the SNB-6004, which has averaged 1-1.5 Mb/s in past tests. However, its night time consumption is lower, generally speaking, as the SNB-6004 often spikes >10 Mb/s.

Cameras were tested using default settings unless otherwise noted. Shutter speed was standardized to a max of 1/30s in all cameras, and quantization adjusted to ~27.

The following firmware and software version were used: