The feature Salto most distinguishes itself on is its use of credentials as a 'virtual network'. We will dig into the particulars of the system, but watching the manufacturer's video first provides a good overview:

While mixed deployments of both offline and online wireless locks are possible, the way Salto uses the credential card as 'read/write' media to update the locks within a system is where it differs compared to other systems.

Salto recommends placing a 'hotspot', or a wired (online) controller placed at primary entrances. Doing so allows the access system to push updates to each user as they enter a facility. 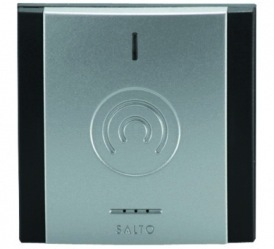 The updates pushed to the card from these hotspots include:

However, updates about the system are pulled from the cards as well:

From there, each door in the system must be furnished with a Salto specific lockset. This hardware typically replaces existing hardware on the door, and includes a reader, handles, and latching hardware, but does not include mechanical locks. The hardware is battery powered and typically offline. However, certain locks are available as 'online' models using a proprietary Zigbee type network. 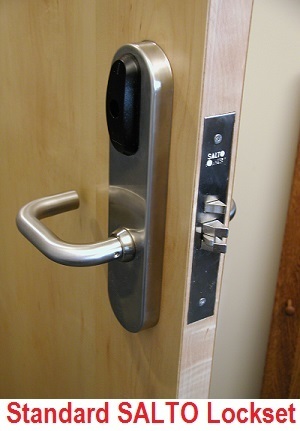 Full hardware replacement is not always required. Salto offers replacement 'retrofit locks' for rim and mortise hardware sets like exit devices and sliding glass doors. However, switching over to the Salto system removes the potential for mechanical keys: 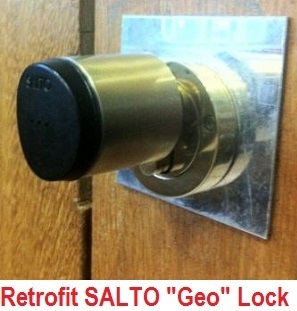 Salto cards are proprietary, and one must buy replacements from Salto for use in a system. However, credentials are compatible with all major data formats, including iClass, MiFARE, and DESfire. Systems other than physical access can be configured to work with these formats (ie: Logical Access, Financial Systems) and Salto credentials can be used for these integrations.

Salto claims that its uncommon use of the credential eliminates much of the infrastructure typically needed by an access control system.

Salto offers a blanket one year warranty on all products, although extended warranty periods can be purchased.

Outfitting most doors for a Salto system will range between $800 - $1000 per door. By comparison, most 'hardwire' access systems range between $2000 - $4000 per door, however neither cost figures in credentials.

By comparison, Salto credentials are higher per unit than generic offsets. For example, Salto's iClass card costs ~$12.50, while non-specific alternatives cost ~$5.00 each.

Pricing is a relative strength of Salto's system, with the average door costing ~50% - 80% less per door. Salto offers the ability to control doors without the expense of expanding power and data networks.

However, the system will not be the right choice for all applications. Several notable drawbacks include:

In many ways, Salto's system can be compared to hotel-type access, where the credential carries data and essentially is what instructs a door whether or not to open. Both systems rely on the credential to update the settings in the lock, both are offline, and both rely on battery power. For more details, see our Hotel Access Control Explained post.

ISC West 2019 Report on Apr 12, 2019
The IPVM team has finished at the Sands looking at what companies are...
Solar-Powered, Smart-Phone-Based Access Kit (VIZPin) Examined on Nov 02, 2018
Cloud-based access control company VIZPin is releasing a solar-powered and...
Comments (12) : Members only. Login. or Join.