The IAPC is the nation's biggest law enforcement trade show featuring all kinds of police equipment from cameras to drones to tanks from more than 750 companies. We attended this year's show in Philadelphia, a great place to see what's popular when it comes to police trends, technology and guns. In this post we review: 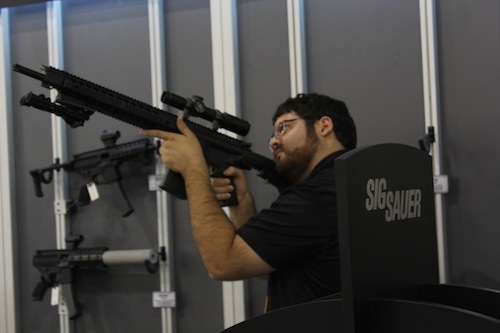 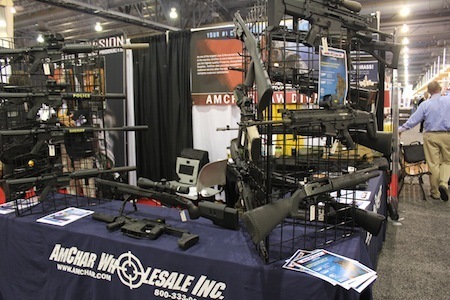 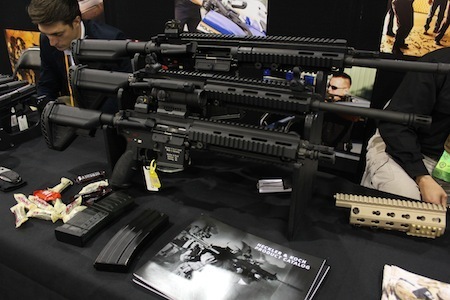 The show is big on firearms and not so big on nonlethal weapons. Glock is here, Smith and Wesson is here -- and various other companies pushing guns. There are a dozen shooting/weapons handling demos, both laser and airsoft. Most of them use similar, unrealistic pre-recorded scenarios that I hope aren't actually used for training. One issue I've always had with shooting demos is the lack of recoil which has an impact on shot accuracy. One company offered a training system that used Co2 cartridges to provide realistic recoil. 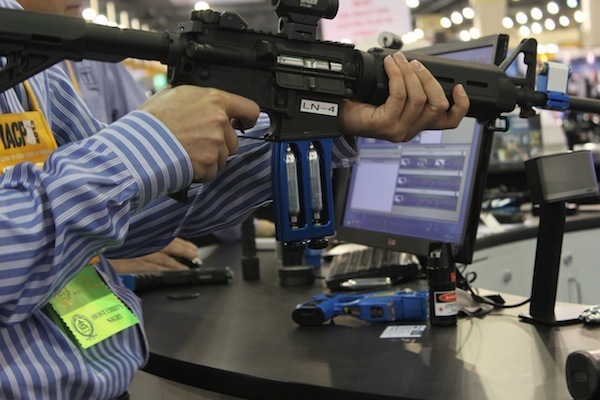 I expected there to be more nonlethal offerings at the show considering the high exposure use of force incidents get in the media, but among police it seems like the demand just is not there at the IACP show. As one officer from New Jersey explained, "We can buy the nonlethal and less than lethal stuff in catalogs. Unless it's something really new then we already know about it or already have it." 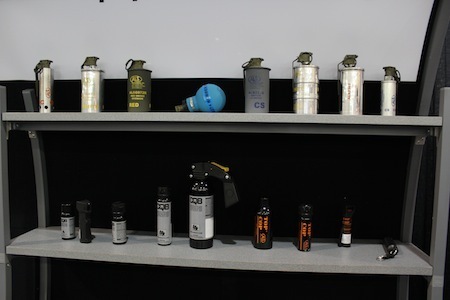 One device that they definitely do not have is from British manufacturer Cerberus Black. The A-WASP is a device that emits a directed siren loud enough to be uncomfortable to the ears, but at a decibel range still determined safe by OSHA. It also uses a low-res VGA to record video as its being used. The company said its ideal usage if for crowd dispersal and evacuation: "You can just aim it at people who are still on the street or poking their heads out windows and you'll see them move away quickly." The device is still in development, but they brought along a working model although they did not give a demo. When they go to production, the will sell for around $10,000. It can be vehicle or building mounted. 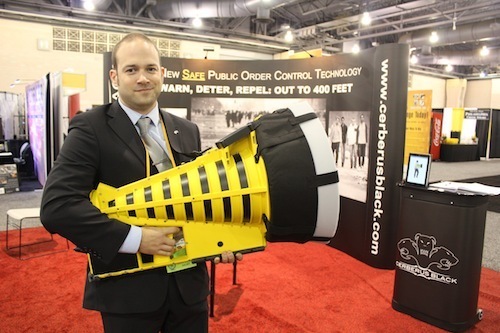 Law enforcement tools with cameras are not using any from major manufacturers. We asked a company with an unmanned ground vehicle fitted a dome camera the type of camera they were using. The reply: "Whatever we can get the cheapest. It's some Chinese camera." He said police aren't picky on cameras and will more often have specifications that they want for equipment, but they will rarely have requirements for what kinds of cameras they use in these robots. 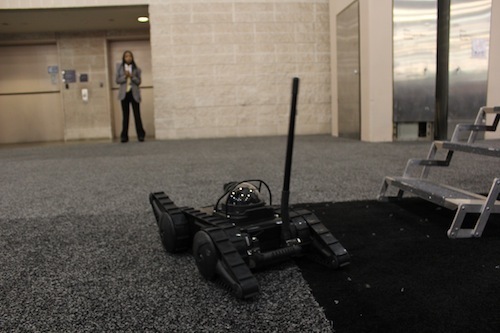 What Police are Looking For

A Utah police officer says the focus currently is on technology that can help officers stay safe, but not necessarily from bodily harm -- from complaints and lawsuits. Similar to what the NJ officer said, he said for the most part police departments have everything they need, but are now using budgets to get additional things that they want. "Do we need body cameras? No. But they would, in some instances, make our jobs easier. It could make them harder too because then we have to upload and download a bunch of crap, but overall once people start using it becomes part of the routine." Interestingly, he compared the use of body cameras to stores using cameras to defend against slip and fall lawsuits. His department does not use body cameras, but are considering purchasing Taser's model because "it's the hot one out right now."

The officer said he has no idea what kind of cameras they use in their interrogation room or around the city, but said "I know they were cheap, and I know they get the job done. We could have purchased something more expensive that gave us excellent pictures, but why?"

We also talked to a consultant for municipal governments whose comments can be summed up succinctly: Don't let police pick their own surveillance systems.

Surveillance Manufactuers Take a Back Seat

Surveillance manufacturers who do it big at ASIS and ISC West were much more subdued for the IACP show. Their booths were small and almost always empty. The four people at the Verint booth routinely got up to walk around and stretch their legs. 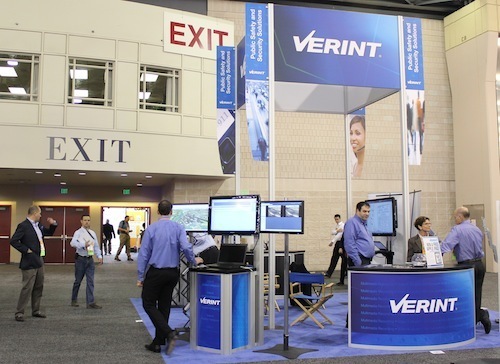 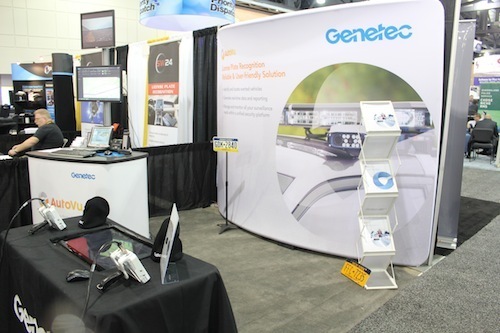 And the Axis booth was next to a digital speed limit sign company. 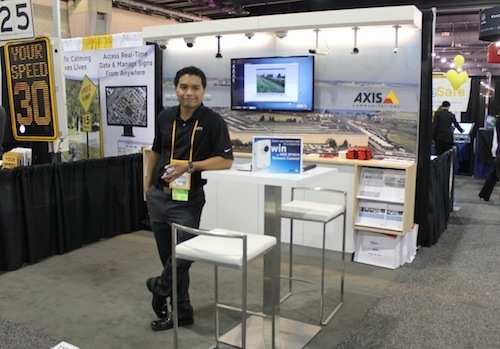 The Most Packed Booth 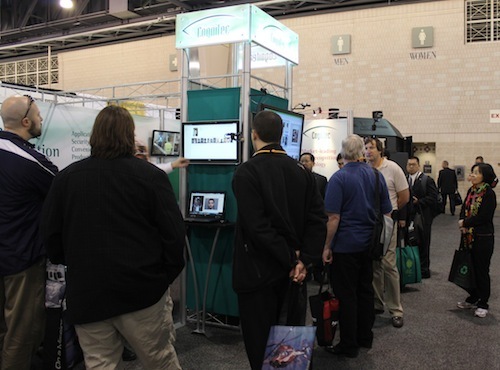 There were less LPF vendors at the show than we expected. The number was on par with the amount at ASIS and ISC West. It was interesting however seeing LPR manufacturers giving in-depth presentations to Shaq as if he was in the market for a system. I later learned that Shaq occasionally attends IACP events. 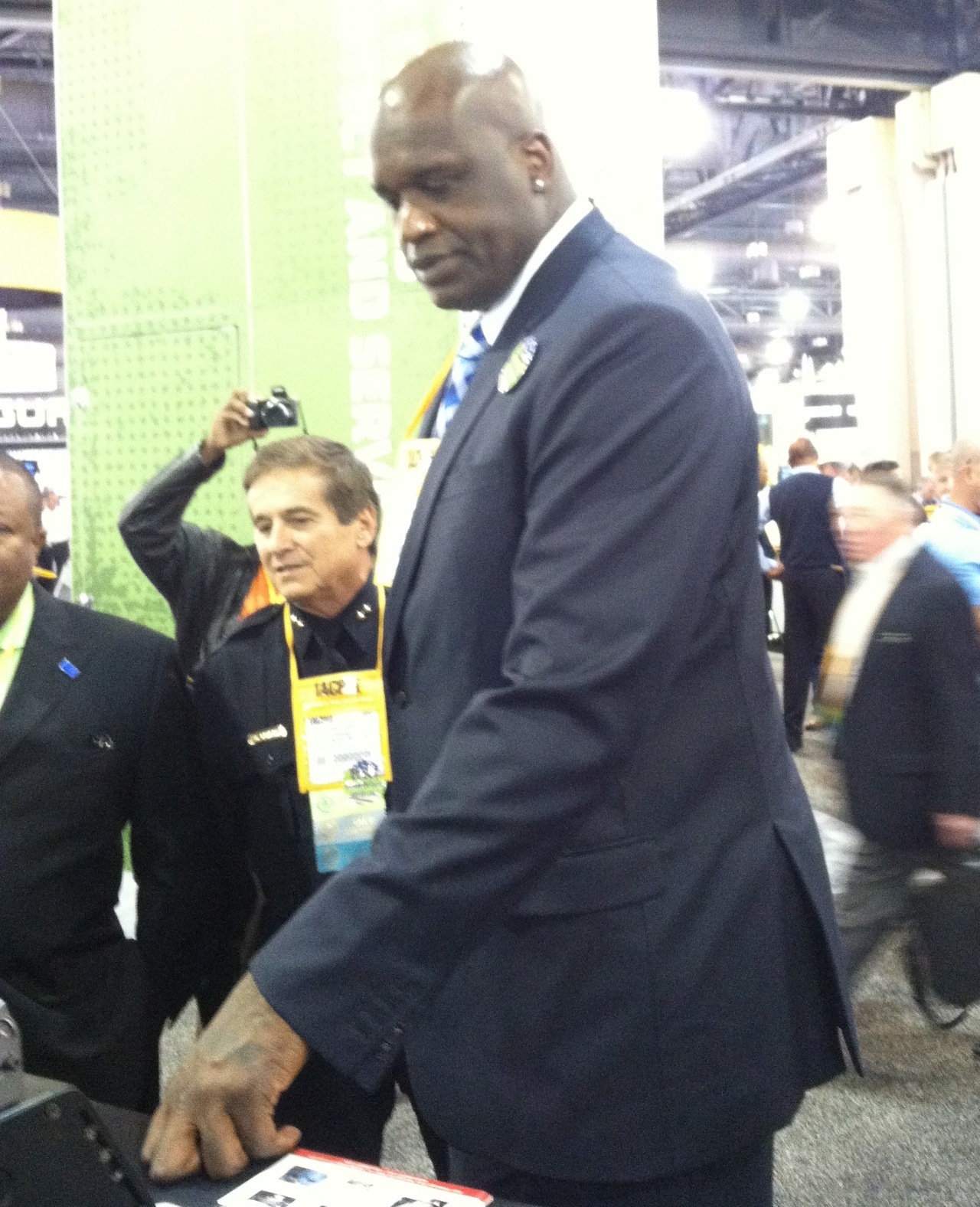 The Most Popular Body Cameras

More and more companies have been coming out with body cameras since the NYPD was ordered by a judge to use them. We examined the booths getting the most traffic. 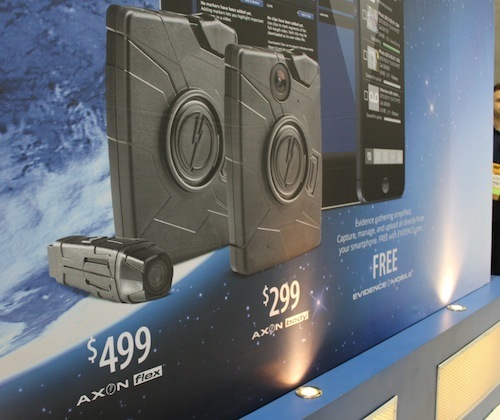 Other than Taser's very popular Axon Flex (which was being advertised for considerably less than the $1200 that the Rialto PD paid for them in 2009) here are the body cameras systems getting the most traffic:

Panasonic's wearable camera [link no longer available] was the most expensive of the body cameras on the show floor, but also the most feature rich (and most solid looking). The cost is around $1,000. It was also the only body camera to have use 180 degree lens. Instead of an internal battery like most other body cameras, Panasonic uses an interchangeable external battery pack. It was the only offering that claimed five hours of recording time and as much as a 90 second pre-record period. It was also they only body camera with gyro compensation and image stabilization that wasn't done with software. 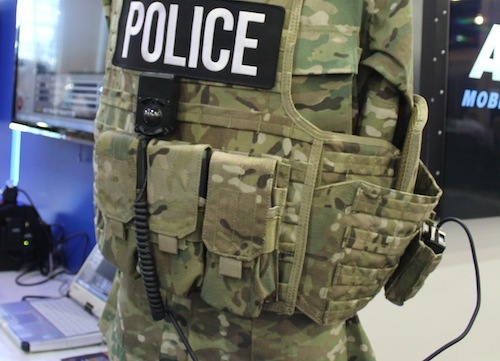 Stalker four months ago launched a solution that integrates Google Glass and dashcams with a software called Coptrax. From the web interface a person can see the locations of every officer on a map and view dashcam video remotely. The video can be stored on local servers or the cloud. The officer can switch from recording from dashcam to Google Glass when exiting his vehicle. They can also set zones and locations of interest that send the officer proximity alerts. The system uses a 3G/4G cellular connection. The cost of the entire Coptrax system starts at $4,495, but that is for a complete in-car system and software. The Google Glass must be bought separately. Video is uploaded to cloud or server using 3G or 4G. 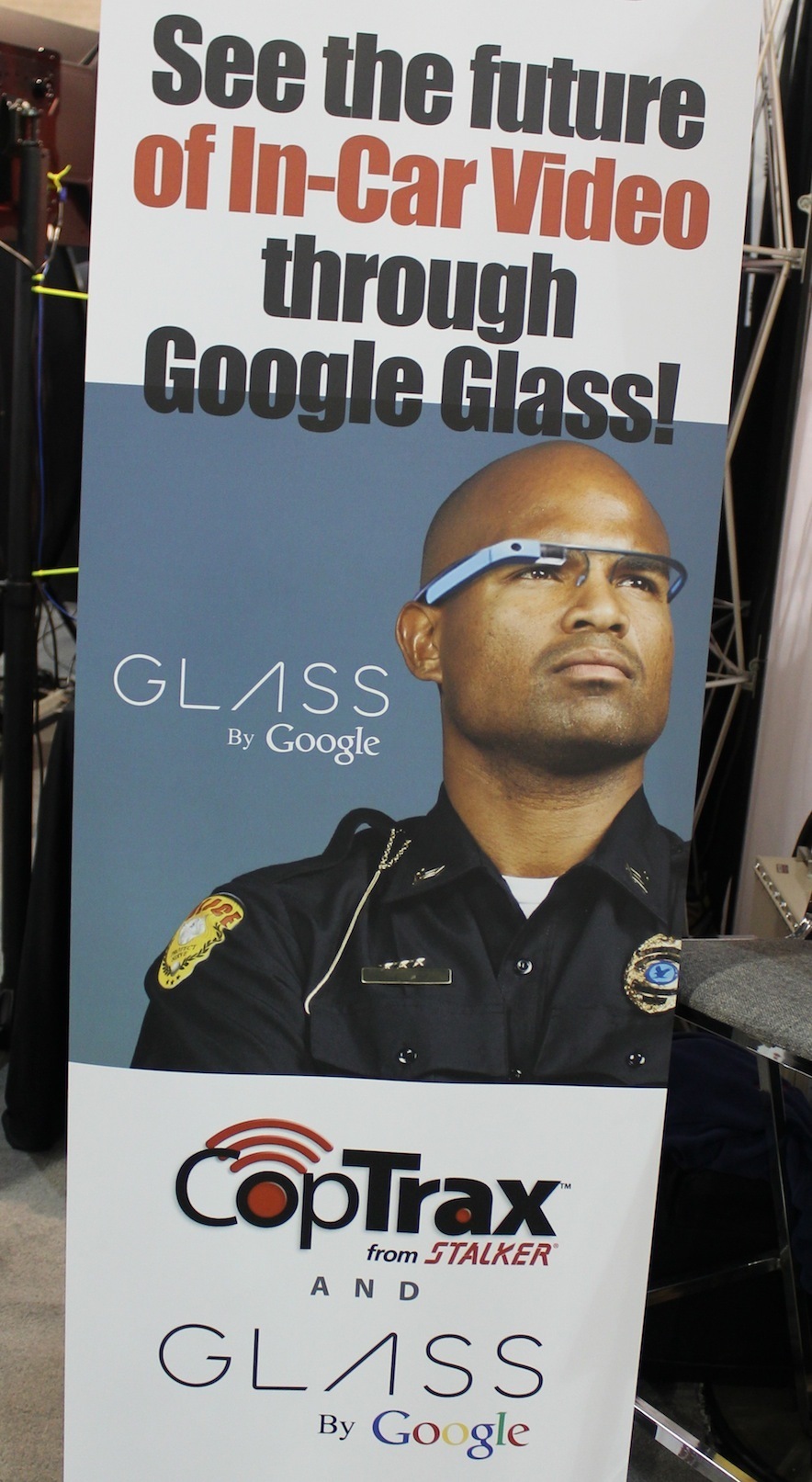 Wolfcom Vision makes a wearable camera that they claim is "the first body camera with night vision." Prices start at $399. It can takes pictures or 1080p video at 60 fps with a 120 degree lens.This one has a screen for playback and allows an officer to watch video he's taken on the scene. The screen also allows and officer to use the camera to look around corners and a variant with IR illuminators is supposed to help see into dark rooms. This camera has a 30 second pre-record period. It uses 32GB internal storage, weighs 2.2. ounces and says it can record 17 hours of video. 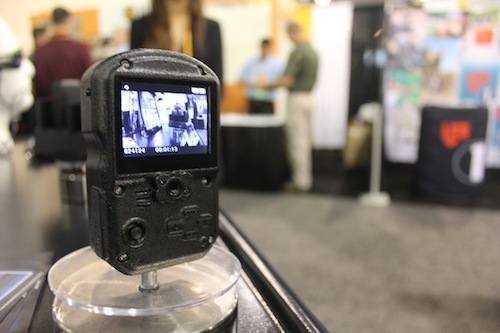 Reveal Media's body Cameras also have a screen for playback (in color). It offers 1080p, 720p and 480p recording at 30fps and H.264 compression. The prices range from $599 to $899 for a bundle (camera plus software) depending on the model and additional features like a rotating lens and HD video. 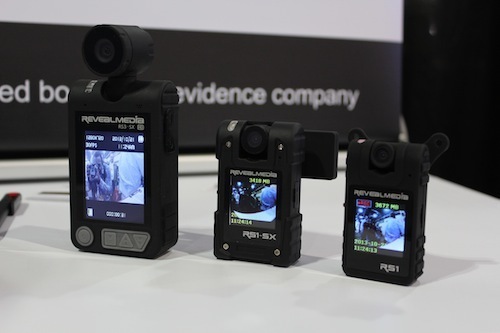 Bodycam's solution also says it can see in the dark using integrated IR that it says works up to 30 feet. The cost is $300. It comes with an 8GB SD card which it says will allow three hours of recording at 1080p. Bodycam says the battery will support four hours of continuous recording and 120 hours of standby.

Let us know if you have questions on any other topics or events from the show.