In 2015, video doorbells are big business. Ring landed $28 million in funding from Richard Branson and others who are betting that this is the next big thing.

However, when Ring's first generation Doorbot hit the market, it was a total failure that left people furious. So we bought a new Ring, installed it (below) and decided to see how well it works. 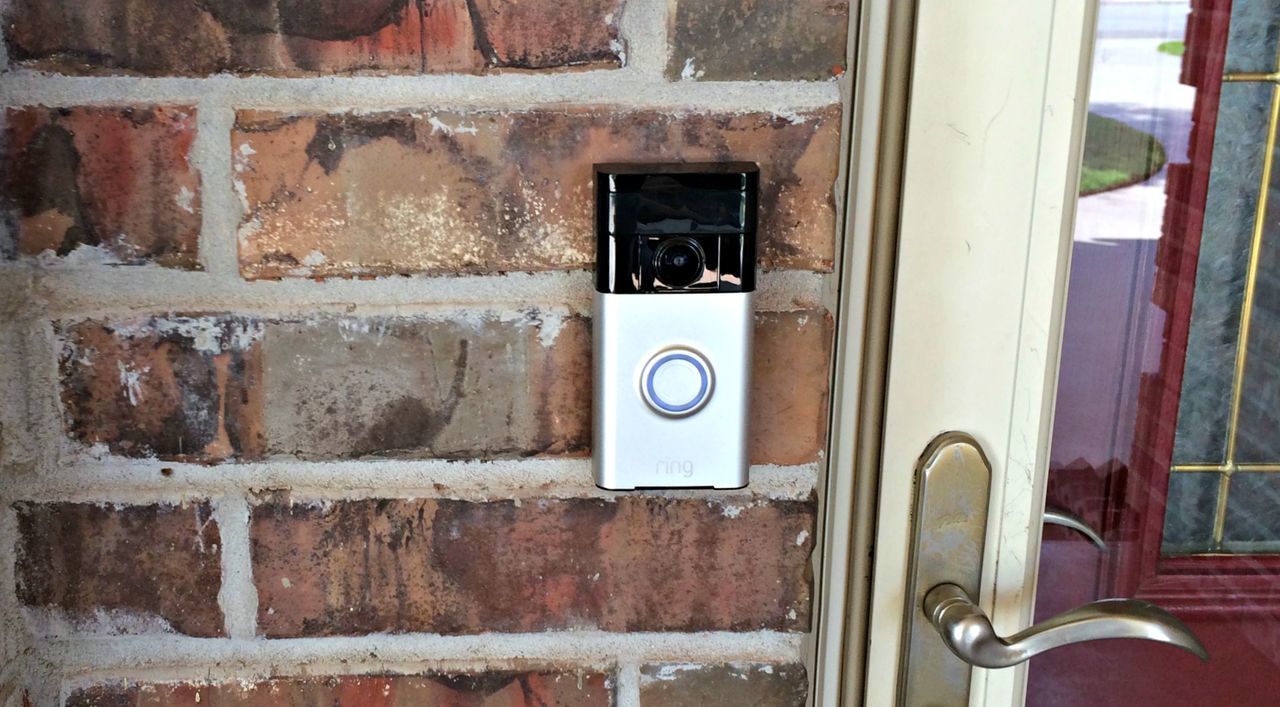 Mediocre Video Quality: In terms of video, Ring includes a 720P fisheye (180 degree FoV) day/night camera running up to 30FPS, and the unit includes IR LEDs. However, because the unit is not true WDR and is connected using WiFi, this video quality is typically much worse than the spec offers.  While video intercom quality is typically not as demanding as surveillance, Ring had trouble with grainy resolution, direct sunlight, video blockiness, and skipped frames in our tests: 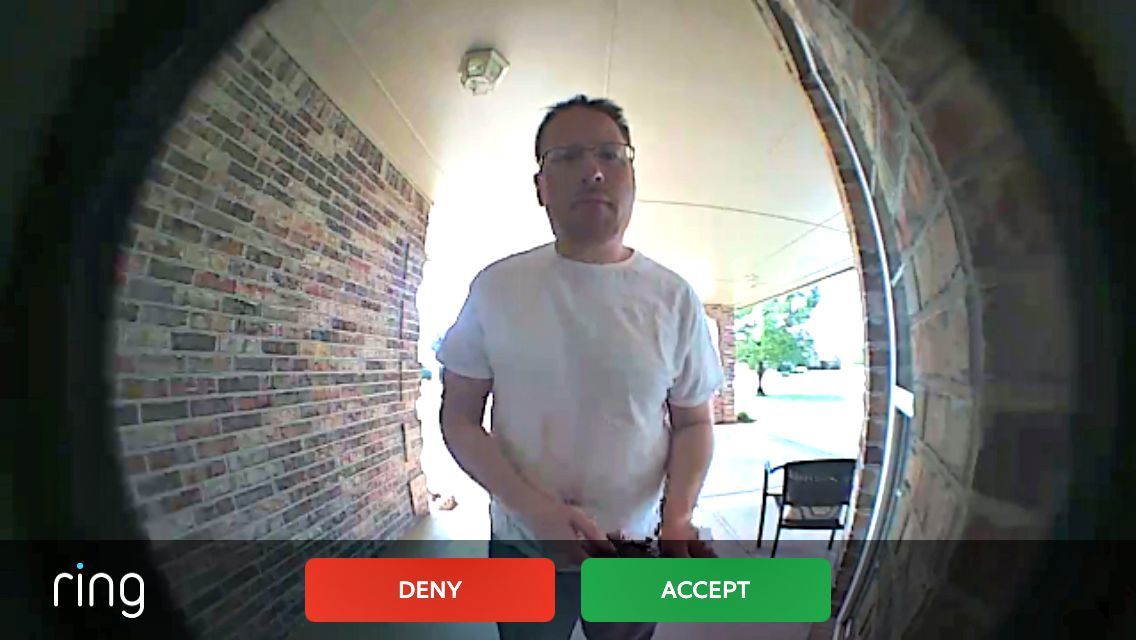 No Live View: Ring does not let the user to access the camera on demand. Unlike a web camera that is 'always on', if no one has pushed the bell button or if the camera is not detecting motion, unit video streams are inaccessible by the user.

Good, Loud Intercom: Ring gets the audio piece right, with a loud, ungarbled speaker and microphone built in. Even when background noise was loud, Ring's claimed 'active noise cancellation' worked well and even background wind or traffic noise did not overpower two-way communication. Unlike video streaming, at no time did the WiFi connection cause audio traffic to fade or drop.

App Dependent: The only way a user has access to Ring's intercom is via smartphone app. If phone batteries are dead or the user forgets/ otherwise is away from their phone, there is no other way for the owner to check Ring activity.

No Lock Control: Ring is <just> a doorbell and unlike most commercial intercom stations does not include relay outputs to trigger a strike or unlock a deadbolt. 'Buzzing' someone through the door is not possible.

Motion Recordings: Aside from being triggered by a button, the onboard camera also can be configured to record on motion in the FoV.  This essentially gives Ring value as a surveillance camera that can notify users of prowlers or other motion close to the main opening.

Retrofit Install: Because Ring is much bigger than traditional bell switches, it may not fit in all locations nor will all current locations be the ideal spot to mount a camera and intercom due to weather exposure, sun, or wind. If user doorbell is exposed to direct sunlight, faces east-west, or if the location is exposed to blowing winds or freezing precipitation, Ring will likely have video quality issues.

WiFi Strength Key: The 'sometime choppy' video performance is due in large part to reliability of the connected WiFi network. In our test, the Ring was hung ~20 feet away from the router through a brick exterior wall and we frequently saw dropped frames and lags.  Ring's FAQ does not state an acceptable range for WiFi, but tech support recommends installing an extender near the door as a blanket solution. For many users, this is unreasonasble and represents an additional expense.

Push Notification Messages Only: Ring does not automatically pop up the app when the doorbell button is pushed or motion is detected; it sends an alert message to notify users of the event. This means the user must manally unlock the phone and swipe the message before video pops up. While undoubtedly included as a privacy safeguard, the process takes time, and the person ringing the bell may walk away in the meantime. Ring does not include any settings to adjust this in the app (ie: Start App on Button Push) so the end result is frustration in some cases.

The video below offers a quick overview of the unit's construction, layout, and size compared to a traditional doorbell:

The unit measures about 3"X5"X1" which is considerably bigger than normal bell switches. However, the unit uses the same two wire connection and 8 - 24 VAC power typically already run for doorbells in most homes. The unit itself mounts to a matching bracket secured to walls by masonry bolts or wood screws.  Mounting the bracket and wiring to bell wires is not difficult and within skills of even novice DIYers. This image shows the mounted bracket and screw terminal wire connections.

Using the existing wires keeps the unit charged, but also ties the existing chime box into the unit, so when the button is pressed the bell is heard. However, the unit also can be mounted to work as a standalone unit without connecting to existing wires. Two additional items become needed:

These standalone limitations have been addressed by Ring engineers via the workarounds above. However, if users want to resolve them completely, hardwiring Ring is the only way to eliminate the hassle.

In this video, we embedded a recorded clip from the unit in use:

Notice the video starts after the bell has rung, but before the app connects and opens an intercom session. Delays about this duration are normal for unit operation, and impatient ringers may leave before the unit connects and can be answered, even in the normal time it takes to pull a phone out of a pocket.

Ring includes a mechanical IR cut filter and has a series of covert (not observable) IR LEDs hidden in the front housing.  Overall nighttime performance is not good, even within 10 feet of the unit, and illumination range quickly falls off.  Identifying the person in the image below is difficult or not possible in IR mode alone. 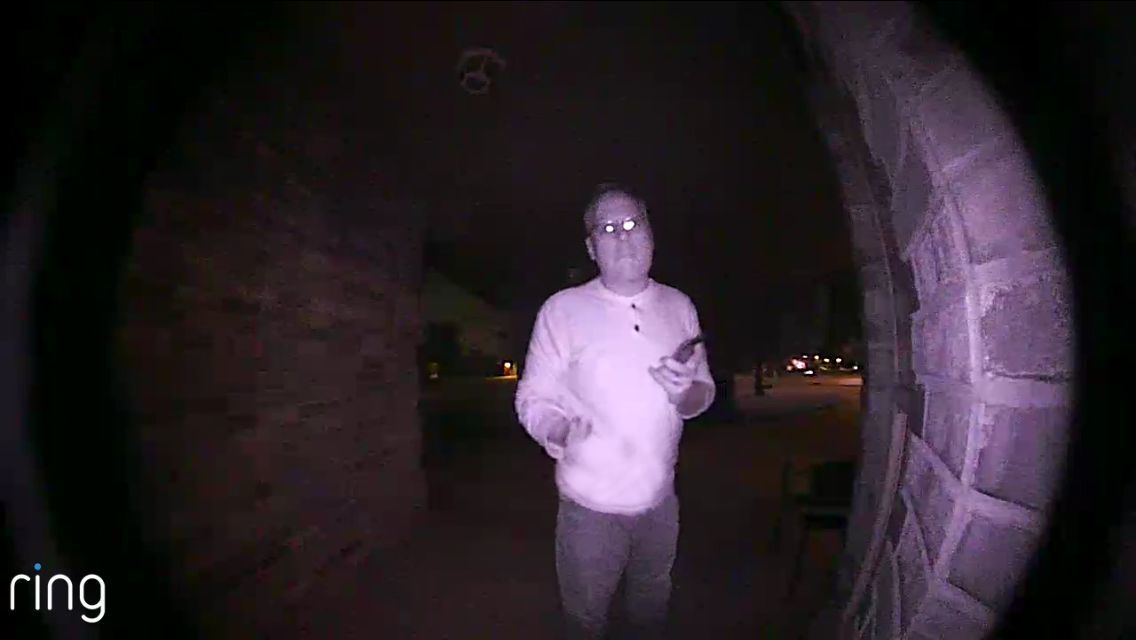 For most doorbell locations, turning on a white 'porch light' would provide much better image quality.

On the point of recording video, Ring sells a cloud service costing $3 per month or $30 per year that records events from the previous 10 days/ ~100 events - whichever comes first.  While Ring allows users to interact in real time with the device whenever it is activated by bell button or motion for free, recording video costs extra and is recurring.

In the demo clip below, no bell is pushed but video is recorded because of motion:

In all cases, stored video is downloadable in .mp4 format via app or web portal and is time/date stamped.

An interesting feature is Ring's ability to restrict motion detection sensitivity within a certain range or turn it off in a specific zone near the unit from within the app: 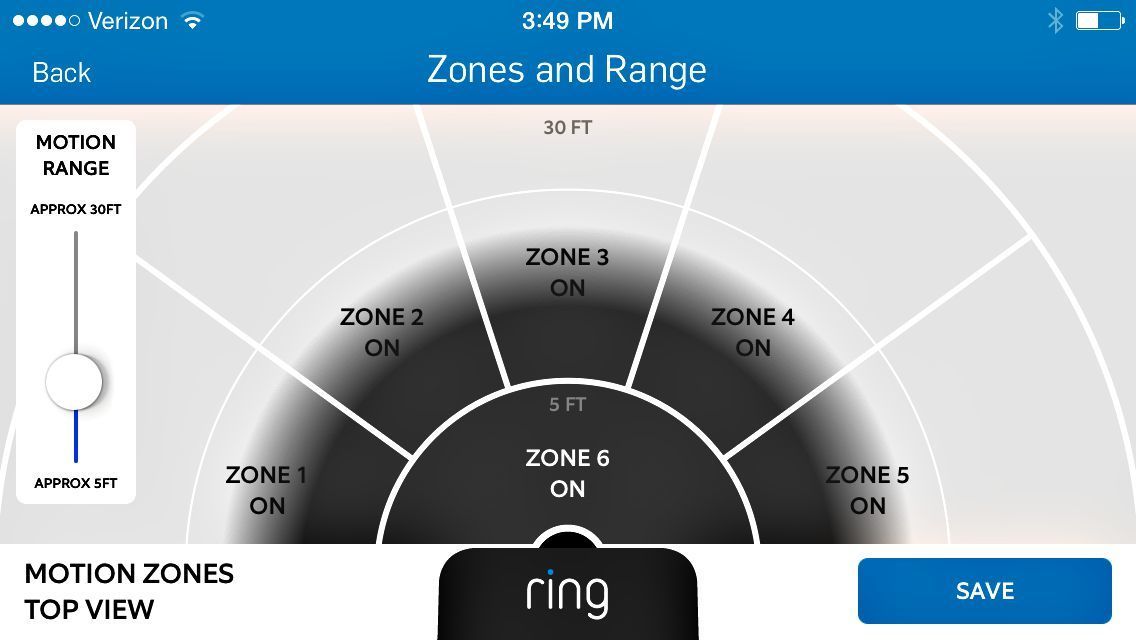 This screen allows 6 different zones to be turned on/off to record motion, so ambient movement like landscaping moving in the wind are ignored by the sensor so it will not send alerts.

In addition, a slider bar permits users to adjust the depth of detection to areas within 5 feet of the unit, out to 30 feet or more.  In our test, a range of about 8 - 9 feet was ideal for detecting motion at or approaching the door but ignoring shadows or movement of vehicles in the adjacent road.

In our tests, motion detection worked reliably, accurately detecting all important 'door' events and recording about 10% 'false alarm' movements due to unimportant outside events like cars or shadows.

For most homeowners, having a Ring improves security in one significant way: it gives the illusion you are home even if you are not.

Aside from being able to remotely see video from the camera, the unit gives you the ability to speak with whomever has pushed the button - even if you are miles away.  If thieves 'ring the bell' first to confirm you are not home, but then your voice clearly establishes you are aware of them being onsite, they may chose to pick other targets.

Beyond that, there are better and more useful surveillance cameras in the market, but for a multi-purpose DIY installed unit Ring will perform well enough for most users.

However, Ring is not without usability issues.  The inability to view the camera on-demand is a big shortcoming that limits its use as a surveillance camera. Furthermore, the dependence on a phone app for use (no web client) could be a showstopper for those unwilling or unable to carry a smartphone everywhere.

Video quality and latency could also be a big problem, depending on the quality of the underlying WiFi network. In our test, we saw problems with almost an ideal setup. For users with less-than-ideal home networks, Ring performance could be a big problem.

Directory Of Video Doorbells on Nov 06, 2018
Video doorbells are one of the fastest growing categories in video...
DMP Adds Ring Video Doorbell Integration on Apr 24, 2018
Video doorbells have become one of the hottest items for security systems....
Directory Of Consumer Security Cameras on Aug 16, 2017
The consumer camera segment continues to grow, with new startups and models...
ADT Launches Canopy - Professional Monitoring For DIY Devices on Jan 19, 2017
The intrusion industry has criticized DIY security systems for...
SkyBell HD Tested on Jul 13, 2016
The video doorbell is flooded with options, but sales have been strong for...
Ring Pro Tested on May 26, 2016
This year, Ring received $61.2 million more of VC funding. For a video...
Americans Vastly Underestimate Being Recorded on CCTV on May 24, 2016
Americans vastly underestimate how often they are recorded on CCTV, by a...
The Brooklyn Access Startup: Kisi on Apr 12, 2016
Straight from the hipster startup hotbed of Brooklyn comes a new IP access...
Camera Doorbell Startup Ring Now With ~$100 Million Funding on Mar 16, 2016
Smart doorbell startup Ring has raised an additional USD$61M in...
Security Camera / Outdoor Light Tested (Kuna) on Mar 04, 2016
A new device, named Kuna, "aims to prevent break-ins before they happen!" We...
Axis Powered Doorcam Launched on Nov 25, 2015
The doorcam market is getting hot, with the most notable player raising $28...
$28 Million Funding for Doorbell Cam Startup on Aug 21, 2015
Yep. Would you spend $200 to see who it at your door on your phone? Well,...
Comments (23) : Subscribers only. Login. or Join.