For a video doorbell.

The video doorbell market is evidently hot but how good are Ring's doorbells?

We bought the new Ring Pro, installed and tested it against its predecessor. 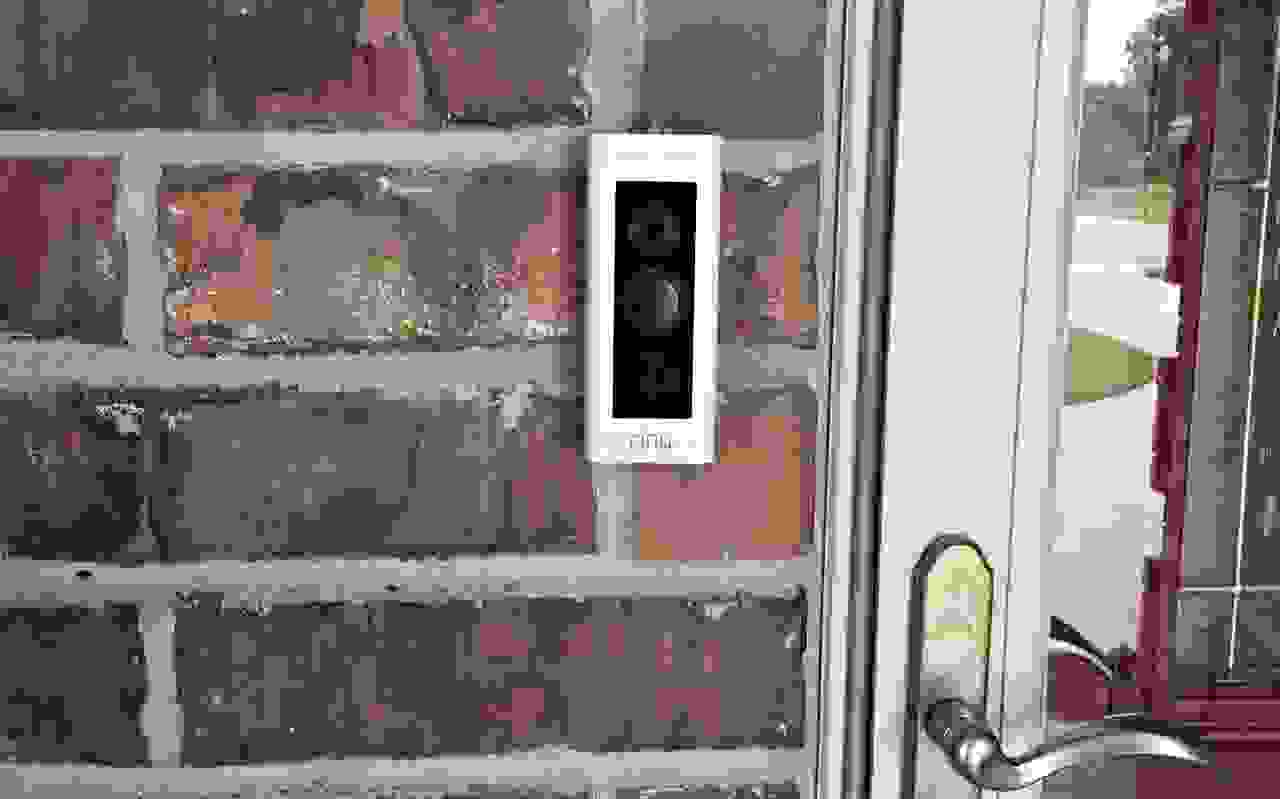 We evaluated this Ring on the same criteria in our test of the first model:

The new model claims several upgrades compared to the first generation. Ring Pro costs $249, while the 1st gen Ring costs $199. For the ~$50 price increase, here are the major tech differences at a glance:

The new Ring Pro has a higher resolution camera, improved night vision, and is smaller is size. However, the new unit does not offer battery power and requires hardwired power, including a more difficult retrofit kit that must be installed on the main doorbell unit.

After testing Pro installation and operation, here are our key findings:

In terms of video, Ring Pro includes a 1080P fisheye day/night camera running up to 30FPS, and the unit includes three visible IR LEDs. While Ring Pro does not claim WDR, performance in a contrast range of lighting is better than the original. The FoV is still wide angle, but is slightly narrower than the previous generation. The comparison image below was taken at the same time, and notice improved light contrast performance and FoV difference: 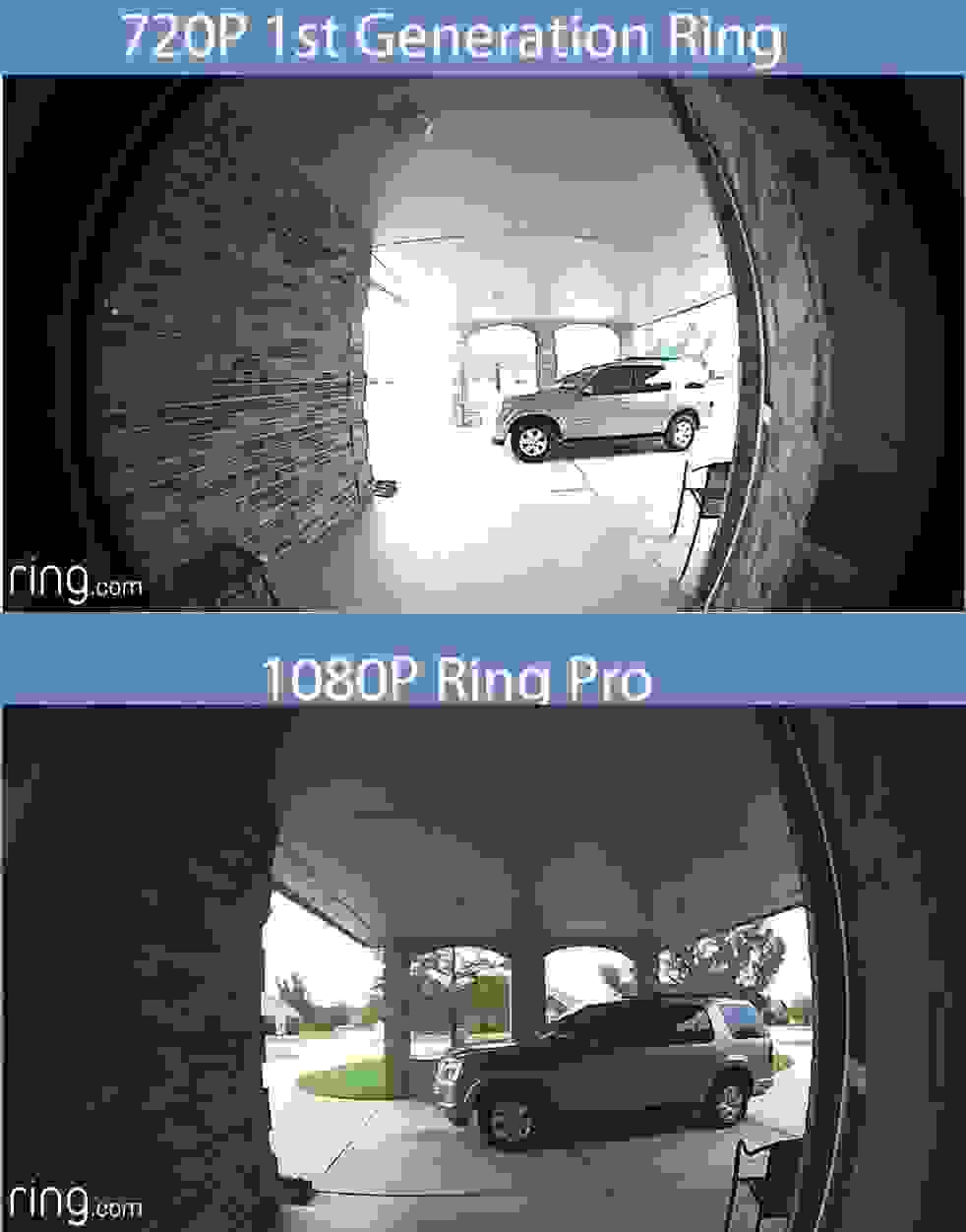 However, Ring Pro had trouble with various video defects, ranging from blockiness, frozen frames, to lost pixel information in our tests:

Ring Pro has with a loud, ungarbled doorbell speaker and microphone built in. Even when background noise was loud, Ring Pro's noise cancellation works well and background wind/traffic noise did not overpower two-way communication. Unlike video streaming, the WiFi connection did not cause audio conversations to fade, lag, or drop.

Like original Ring, the new Pro unit does not include relay outputs to trigger a strike or unlock a deadbolt and performs only as a video intercom. 'Buzzing' someone through the door is not possible, although the app claims integration with several lock vendors like Lockitron, Kevo, Kisi, and Lockstate and smart home or security platforms like Wink and ADT Pulse.

Aside from being triggered by a button, the onboard camera also can be configured to record on motion in the FoV. This essentially gives Ring value as a surveillance camera that can notify users of prowlers or other motion close to the main opening.

Retrofit Install: While smaller than the 1st gen Ring, Ring Pro is still larger bigger than traditional bell switches, it may not fit in all locations nor will all current locations be the ideal spot to mount a camera and intercom due to weather exposure, sun, or wind. For users who have previously installed a Ring upgrading to Ring Pro, an additional retrofit backplate is needed to hide old mounting holes.

Push Notification Messages Only: Ring Pro sends an alert message to notify users of an event, but does not automatically pop up the app when the doorbell button is pushed or motion is detected. This means the user must manally unlock the phone and swipe the message before video pops up. While undoubtedly included as a privacy safeguard, the process takes time, and the person ringing the bell may walk away in the meantime.

The video below offers a quick overview of the unit's construction, layout, and size compared to a the 1st generation Ring:

The unit measures about 4"X2"X1" which is about 1" smaller in height and width than the original model. The unit uses the same two wire connection and 16 - 24 VDC power typically already run for doorbells in most homes. The unit itself mounts to a matching bracket secured to walls by masonry bolts or wood screws. Mounting the bracket and wiring to bell wires is not difficult and within skills of even novice DIYers. Unlike the original two-piece install of the original, Ring Pro installs as just one doorbell unit.

Unlike the original unit that was ordered from the factory in different colors, Ring Pro includes four changeable faceplates to match user preferences in the field.

Ring Pro requires using a low voltage transformer for power and ties the existing chime box into the unit, so when the button is pressed the bell is heard. However, this process features a delay of 2-3 seconds between pushing the button and hearing a chime, which Ring uses to send notifications to user apps before announcing people at the door. 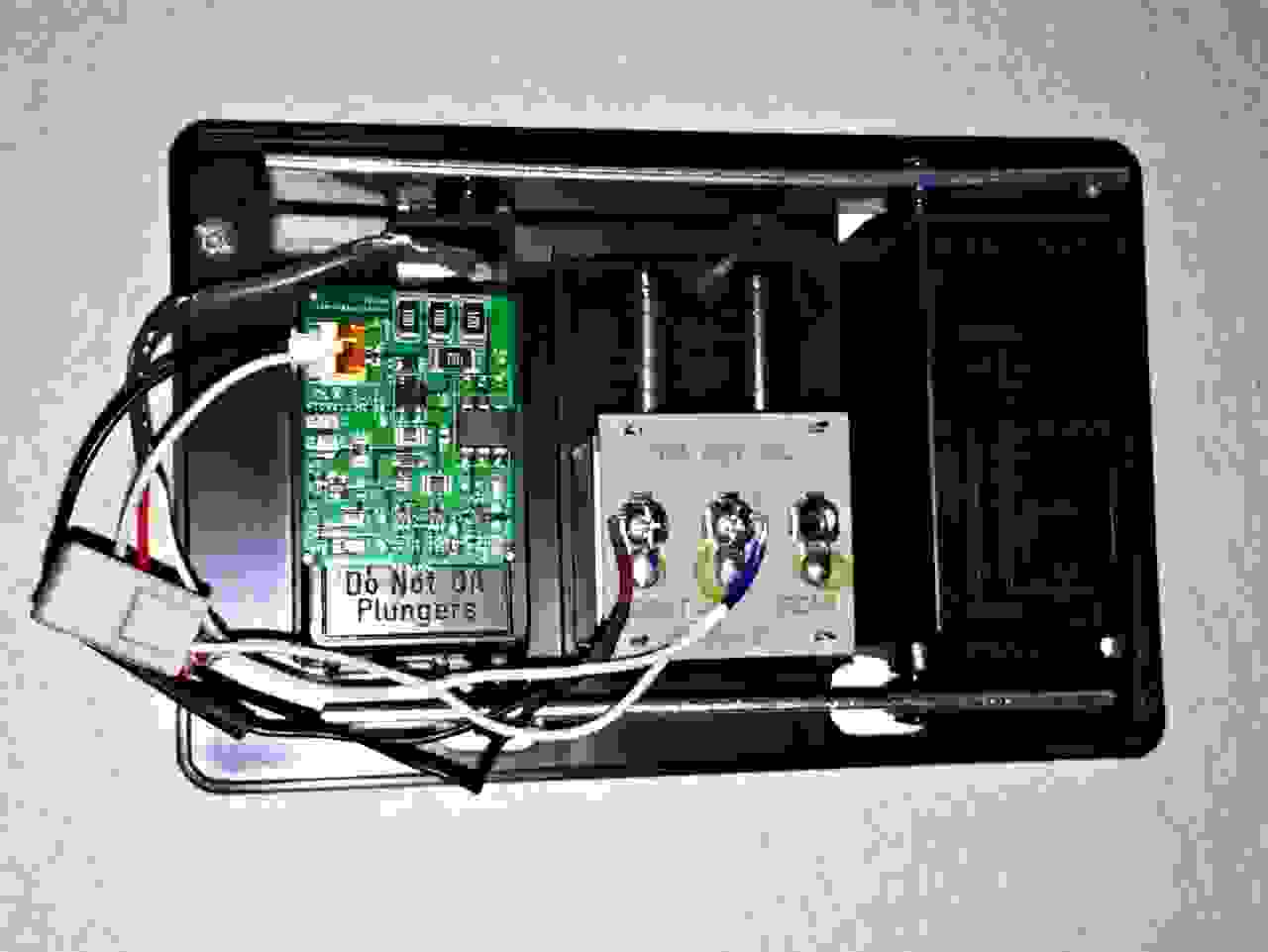 The complexity of Pro install has been noted by Ring, who is offering 'Free Professional Install' for a limited time where they will pay to have Pro hung by commercial installers. Despite being marketed as a DIY product, the fact Ring is absorbing professional install costs is not a good sign for install simplicity: 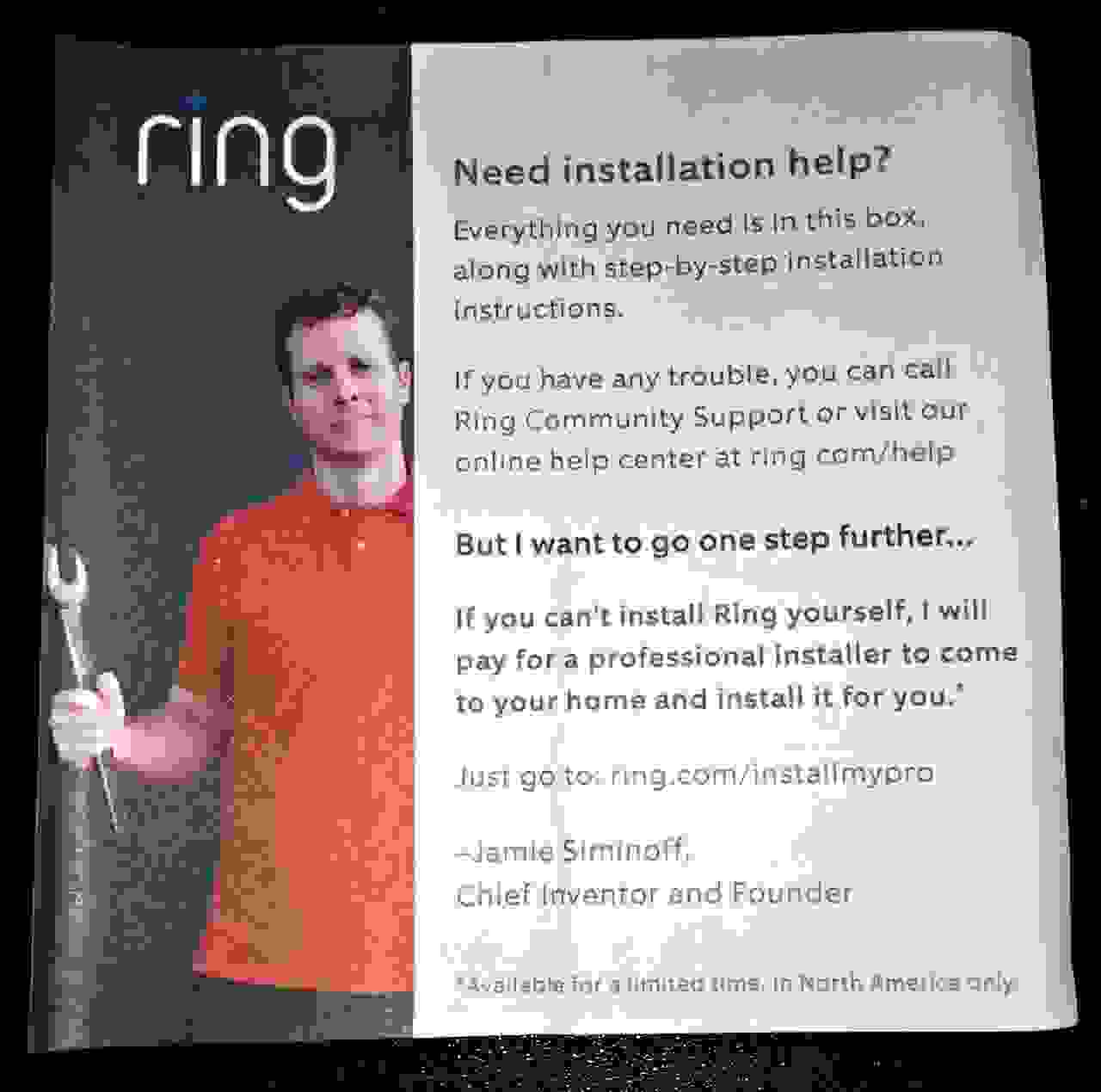 We will publish a post just on the terms and details of this free professional install program in the near future.

In this video, we embedded recorded clips from the unit in use. You may notice that video lags audio in general, which while not a showstopper is likely an irritating problem for users.

And a nighttime clip:

Lags about this duration are normal for unit operation, and impatient ringers may leave before the unit connects and can be answered, even in the normal time it takes to pull a phone out of a pocket.

Ring includes a mechanical IR cut filter and has three red IR LEDs hidden in the front housing. Overall nighttime performance is improved compared to the 1st gen unit, which was not good even within 10 feet of the unit, but the Pro model does a much better job of lighting the scene even 20' away. Subject detail as they are using the doorbell is good enough to recognize familiar faces and can see movement ~30 feet away from the camera: 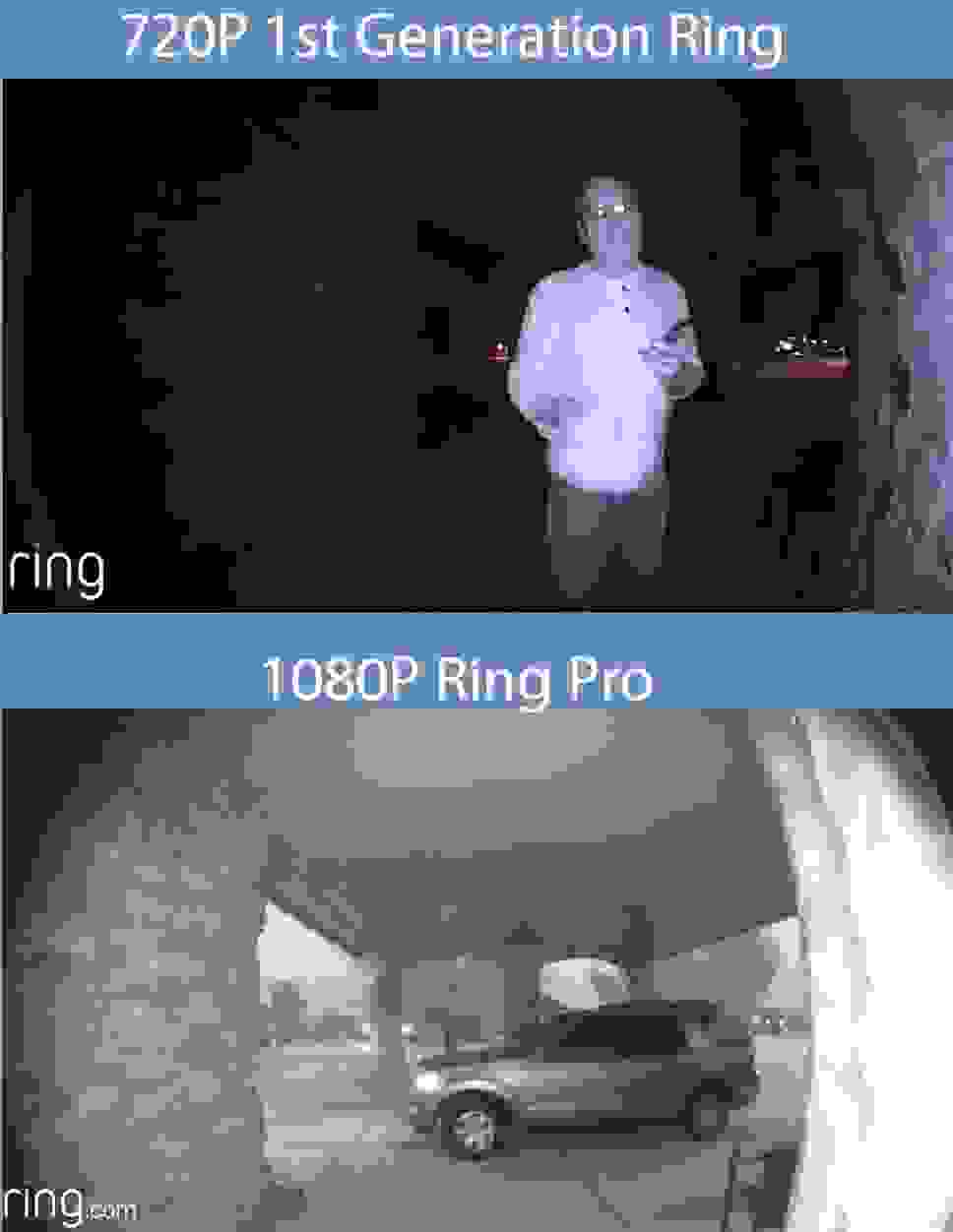 However, as with the original Ring, if users have the option to turn on a white porch light, overall image quality will be better than using IR alone.

Since the first Ring was released, the company has added a 'Live View' option in the app for peeking in on what the camera is seeing at any time, regardless if motion is detected or the button is pressed. These events also trigger recordings that can be recalled or downloaded via the app or web portal. 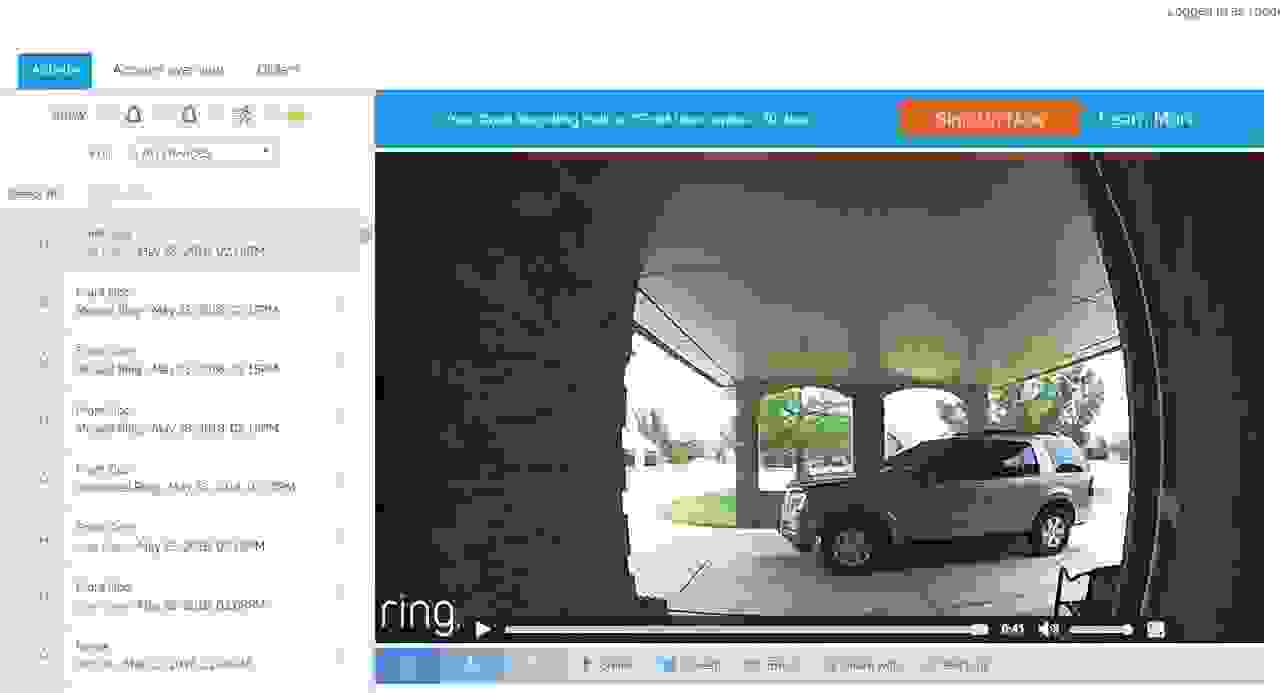 In addition to Live View, Ring has a cloud service costing $3 per month/ $30 per year for recording events from the previous 10 days or ~100 events. While Ring allows users to interact in real time with the device whenever it is activated by bell button or motion for free, recording video costs extra and is recurring. In all cases, stored video is downloadable in .mp4 format via app or web portal and is time/date stamped. 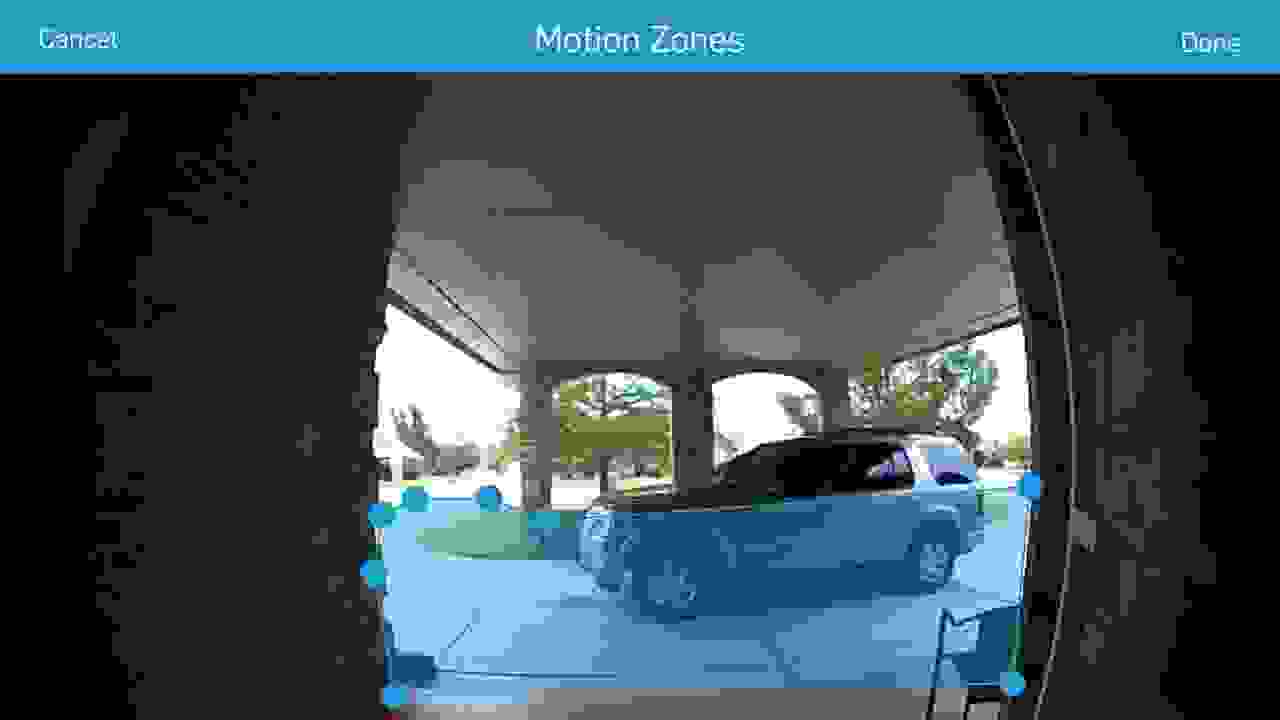 Up to 6 different custom zones can be placed to be turned on/off to record motion, so ambient movement like landscaping moving in the wind are ignored by the sensor so it will not send alerts.

In our tests, motion detection worked reliably, accurately detecting all important 'door' events and recording less than 5%- 10% 'false alarm' movements due to unimportant outside events like blowing leaves, animals, or shadows.

Ring Pro will not be a good fit for many, while 1st gen Ring may still be appealing. While overall nightvision performance is greatly improved, the installation complexity and hardwiring requirement will likely turn some off. Ring tells us they plan to continue to sell and support the original model, and even with the reduced resolution and poorer low light abilities, it will remain the best choice for those users looking for a quick installing, cheaper solution.

Axis Door Station A8207-VE Tested on Aug 07, 2019
Axis newest door station, the A8207-VE, claims to deliver "video...
Bad: Dahua Villa Video Doorbell Tested on Jan 11, 2019
Doorbells are one of the hottest segments in the residential market but...
Directory Of Video Doorbells on Nov 06, 2018
Video doorbells are one of the fastest growing categories in video...
Zenitel/ Stentofon Turbine IP Intercom Tested on Aug 06, 2018
IPVM has published reports testing an Axis door station and a Hikvision door...
Amazon Ring Alarm System Tested on Jul 16, 2018
Amazon Ring is going to hurt traditional dealers, and especially ADT, new...
DMP Adds Ring Video Doorbell Integration on Apr 24, 2018
Video doorbells have become one of the hottest items for security systems....
Amazon Billion+ Dollar Acquisition - Ring on Feb 27, 2018
The world's largest online retailer, Amazon, is now on a fast track to...
Testing DMP XTLPlus / Virtual Keypad Vs Alarm.com & Honeywell on Dec 13, 2017
DMP has a strong presence in commercial intrusion alarms, but not in...
SkyBell Trim & Slim Models Tested on Sep 25, 2017
Given continued growth of video doorbells and the central role Skybell plays...
Geovision Doorstation Tested (CS1320) on Sep 12, 2017
Geovision has released the GV-CS1320 door station, priced at a fraction of...
DoorBird D101 Tested Vs Ring and Axis on Sep 01, 2017
Video doorbells are a big growth market, with Ring, in particular gaining a...
Alarm.com Vs. Honeywell Total Connect Shootout on Aug 30, 2017
In the smarthome and intrusion market, Alarm.com and Honeywell are two of the...
Directory Of Consumer Security Cameras on Aug 16, 2017
The consumer camera segment continues to grow, with new startups and models...
Alarm.com Tested on Jul 13, 2017
Alarm.com has become the dominant force in smart home / remote service...
DMP Video Doorbell / Access Reader Examined on May 17, 2017
Consumers increasingly demand video doorbells, with "doorbells selling like...
Ring Floodlight Cam Tested on Apr 20, 2017
Ring has released their latest entry, the Floodlight Cam, calling it the...
Ring Buys Installs For New Customers on Jul 19, 2016
Q: "When is DIY not really DIY?" A: "When Ring offers to buy professional...
SkyBell HD Tested on Jul 13, 2016
The video doorbell is flooded with options, but sales have been strong for...
Comments (9) : Subscribers only. Login. or Join.