Ring has also announced a "Pro" doorbell, which is an enhanced product offering vs. a reseller-oriented product.

Ring is also adding live video functionality to the existing and new products. That was supposed to roll out today, but I haven't seen it yet. 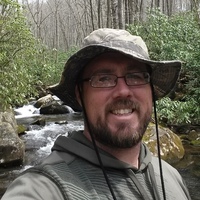 Is your unit hard-wired? I imagine live video would really drain the batteries quick.

It is, and they said in the email it would be at least a month until live view would be available on battery only units.

Mine is also hard wired.

They are lighting up live video over the next two weeks. You will get an email telling you it's available for your account. I haven't seen mine yet.

I am fascinated to see if Ring can get acquired before this market is commoditized.

Ring could have become a solid niche high-end provider but now they really need to get an acquisition as that's too much investment to build long term company given the hardware competitors around.

In the last six months or so, there have been a rash of sub-$200 video doorbell units released:

So video-doorbell commoditization may be days, not months away.

I disagree. If you look at the alternatives they all rate pretty far below the current Ring product, and with the changes Ring is introducing many of the "negatives" currently associated with their products are being addressed. Ring could establish themselves as the only choice in the category, and continue organic growth through additional products and cloud services. That said, they really need to avoid any major hiccups in the coming releases to maintain their reputation.

Unfortunately, I was recently informed by Honeywell that they plan to support a different product for integration into their automation products. I don't know how big of an impact that will have, but I personally ordered (the other doorbell) after hearing this and promptly returned it after 3 days, quickly determining that integration into my system wasn't worth the major performance differences.

"Ring could establish themselves as the only choice in the category"

How? You think other companies cannot build a quality video doorbell?

I certainly can believe that the early overseas doorbells are not great but we have seen rapid progress and increasing parity in many other video segments.

I absolutely think other companies can, and will. My point is that as of now they appear to be taking pretty firm control of the segment, and opportunities exist. I am not saying they will, but they could. I know it's outside the realm of this site, but I would point to Sonos as an example. There have been scads of competitors in the home audio streaming realm but Sonos dominated by producing a reliable product with great features which they constantly upgraded and expanded.

How did you get to this:

"Assuming a 50% gross margin, Ring would have to sell roughly 9,000,000 doorbells in order to make the kind of returns investors commonly expect."

I would have thought:

Assume a 5x return for investors => $1B valuation.

2.4M units/year would give them $300M revenue. Which is in ballpark of $1B valuation.

Still a lot of doorbells!

Neither assessment mentions cloud revenue, accessories, stick up cams, etc. I average 3 chimes per Ring, and while I would never sell a stick up cam I'm sure the average self install will include a few (as well as the additional cloud storage cost).

You're right, that part of my report was not clear, I edited it, but wanted to address your comment about my 9M estimate.

I also want to point out that I said "doorbells", but it's really any of their products. Doorbells, cameras, deadbolts (speculation), whatever.

Ring isn't the only company in this game, and they have risk of competitors coming up much more so than Dropcam or Nest did at the time of their acquisitions, this can push their valuation down if they end up in a crowded market. I was assuming investors would want a return in the 8-10x range, or an exit price approaching $2B.

I'm assuming Ring would be looking for a 3-4 year exit strategy at this point, so they'd have to grow to have sold ~9,000,000 doorbells/cameras/etc over the next 3-4 years to show that they have a solid product, wide applicability, staying power and so forth.

With an ASP of $200 to start (which might actually be a bit high), and a 20% decline in ASP YoY (cheaper products, price pressure, channel discounts) their Year 4 Revenue would be $380,160,000. This is assuming all hardware, no money for cloud services.

I'm not sure I believe a lot of people will pay $250 for a doorbell and $10/mo to see who is ringing it, but let's say they have $34M in high-margin cloud services as well (that's roughly $1/mo for every unit ever sold at that point. Not every unit would still be in service, etc., so just an estimate).

Ring is going to be mostly hardware driven, which tends to give lower multiples than pure software companies. A 5x revenue number would be average. Nest and Dropcam got higher valuations, but they were early. Lorex got <1x when bought by FLIR, Milestone rumors had them a little than 3x, Axis was ~4x. If other consumer automation/security companies get bought up on big multiples this will help Ring. If other automation companies struggle, this will not help Ring.

We don't know what kind of exit Ring's investors would accept, and we don't know what other products or services they will roll out. But given where the market is, I don't think Ring will have a Dropcam-style exit. I think it's going to be a much harder go for them, but they *do* have a shot at a win if enough things go in their favor.

I think that if Ring does not sell several million units with steady growth their valuation will end up too low for a positive exit.

What do you think of my logic?

I think investor viewpoint on a company like that could include the following things:

- Nest has gotten to (I think) few million units/yr. Similar priced product, against entrenched competitors (Honeywell), and they got a very good valuation. So a proof point on this type of path.

- There is a battle for the home "platform" right now, and a wave of residential applications in general, and all toeholds are valuable. Lots of change happening, in Residential, being around change is usually good from (early stage) investment standpoint (compare to "Security" market, that is more stable/mature). I dont know if Ring is a "platform" play or not.

- 8-10x return is nice, but in some situations where there is likelier earlier exit, most people will take less.

- a good team (and maybe good core tech) can move with the market. So likely investors would be judging company not only on this initial product. In fact most investors will judge early-ish stage companies based on (1) team, (2) vision and market, and (3) products/tech (in that order). This is based on notion that a good team can find a new market and build new tech.

[UPDATE:] We ordered and received an 2nd-generation Ring Pro. Our full test, comparison, and results are coming soon. 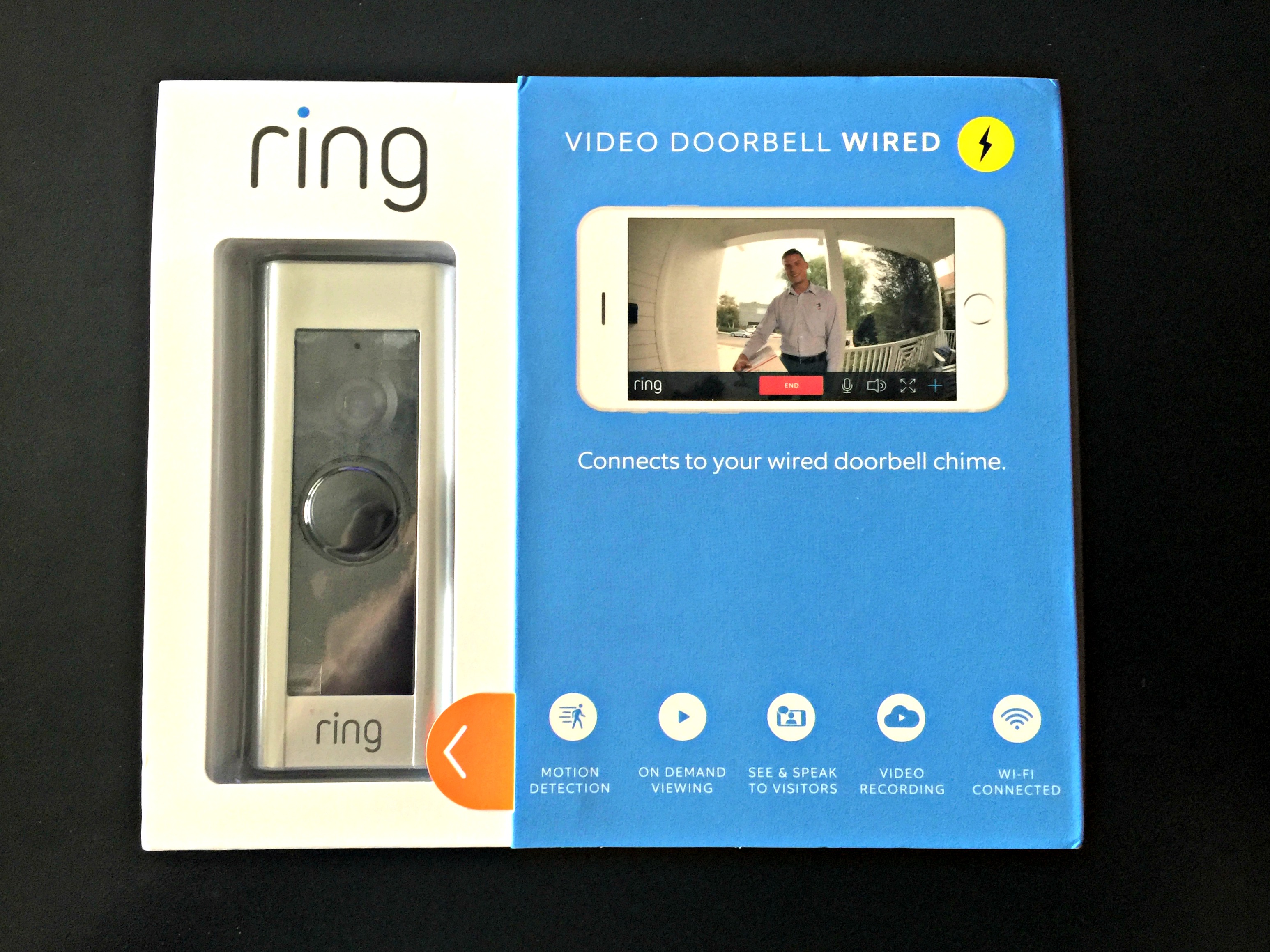 I received notice of Live Video added to the first generation Ring today.

Like several mentioned, right now the feature is only supported on hardwired units. Here are a few screenshots from the app: 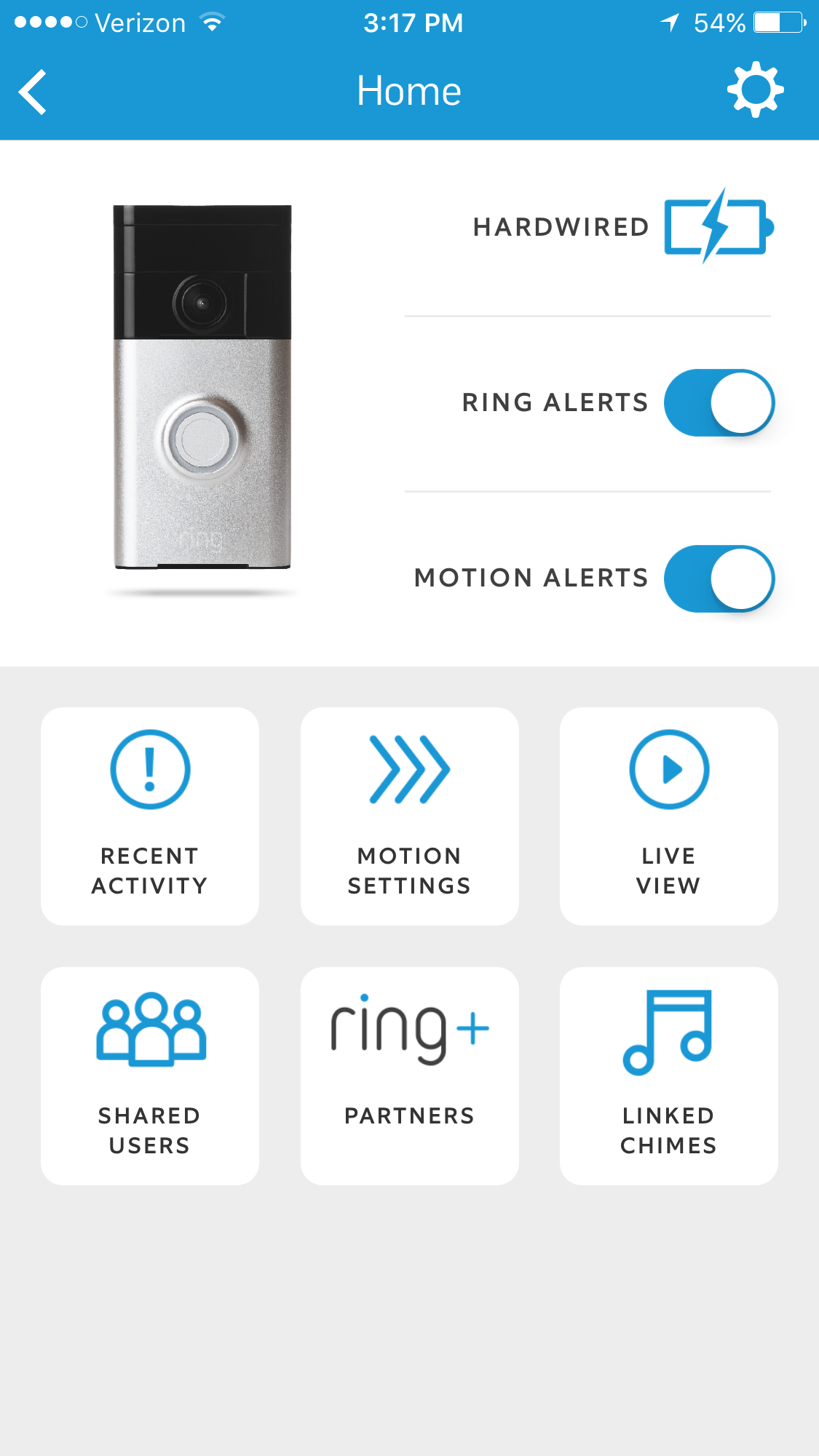 Buffering is a bit slower than normal, bringing up Live View vs. Recordings: 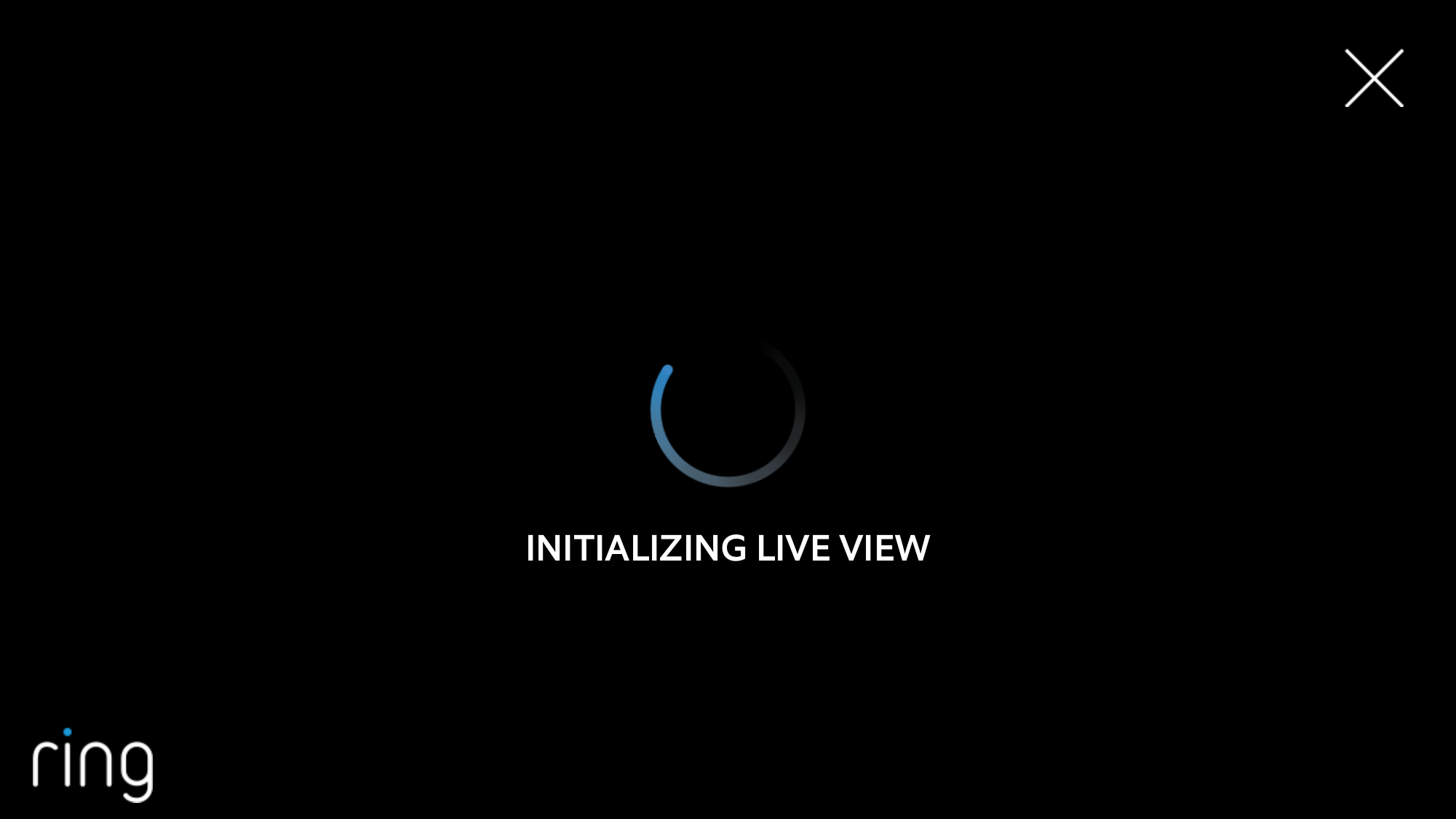 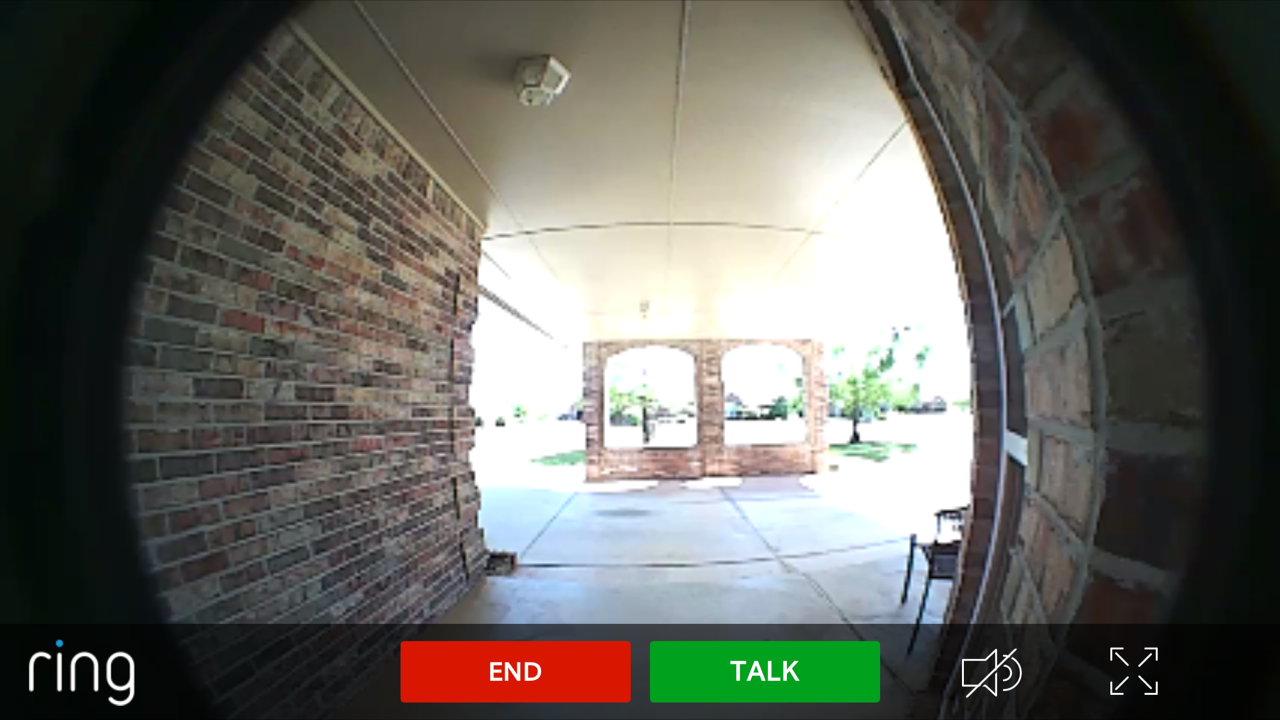 Overall, for a lacking feature that was a big gap, Ring has successfully filled it with "Live View".

The image is not great, even a simple dedicated surveillance system will not have difficulty outperforming it, but in a combo intercom/doorbell and using an app that users already have downloaded and are using, this is a nice feature.

On a related note, we will contrast the 1st gen Ring with the 2nd gen Ring Pro in our upcoming test. Live view performance will be a part of that test.

But is that video from your house?