They are not the same thing.

Unfortunately, too many industry people conflate them.

Worse, resolution and compression can silently undermine each other.

Compare the two images below. The resolution (aka pixel count) is exactly the same but the compression levels (and bandwidth) are much different:

Because of the compression difference, even though everything else is the same, the visual quality is much different.

Compression, in surveillance, means how much the pixels / video is compressed. There is a scale from minimum to maximum. In H.264, it is called quantization, ranging from 0 (least) to 51 (most). See: IPVM's Video Quality / Compression Tutorial.

In this test, we took a series of 720p IP cameras, decreased the compression levels to see how far we had to go to make it 'look' like a 1080p camera with default compression levels. We then compared bandwidth consumption of each camera.

Also, in this test, we took a series of 5MP and 1080p cameras, increased their compression levels to see how far we had to go to make it 'look' like lower resolution cameras (1080p / 720p respectively) with default compression levels.

Our goal is to understand and show you:

Though H.264 allows compression / quantization levels of 0 to 51, most manufacturers restrict how little or much the user can compress.

We tested 7 manufacturers using a video analysis tool, with their low and high compression settings to determine what those constraints were:

Notice, only one allowed the full range.

This might be a 'hack' worth considering. If you take a higher resolution camera (say 1080p), increase its compression level (say to ~40), it will look similar to a 720p camera at default compression levels, like so: 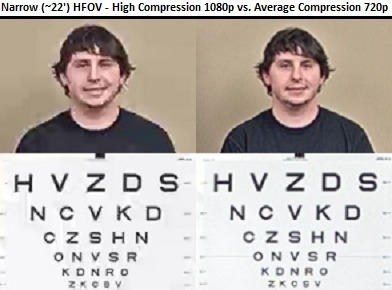 The big benefit we found was that the 1080p / high compression video was, on average, 50 to 75% lower bandwidth than the 720p / default compression one.

We found this to be the case even in wide scenes with relatively low PPF, like so: 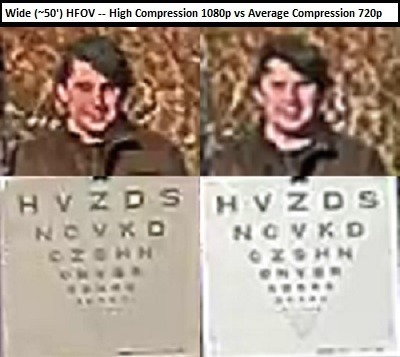 In particular, verify that it has the low light, WDR and frame rates you require as some higher resolution cameras have comparative deficiencies there.

Many people like the idea of lowering the compression level of a camera to get better quality. Our testing shows this is a bad idea, because of bandwidth spikes and difficulty in increasing quality. 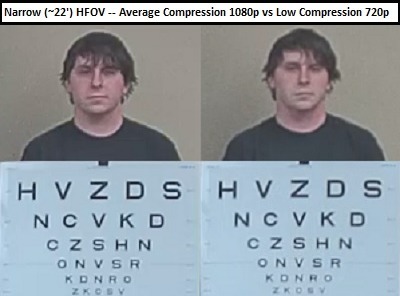 However, to get there, the bandwidth consumption of the 720p / low compression was 200% to 400% greater than the 1080p / default compression cameras. As such, the penalty in trying to make it look better, both in network and storage costs, are significant. 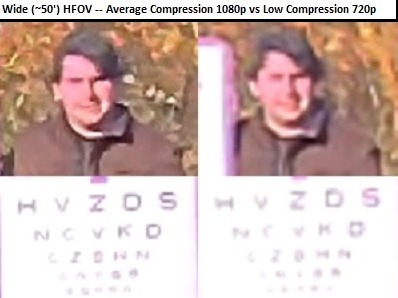 Despite being as aggressive with lowering compression on the 720p camera, it was still clearly visually inferior to the 1080p one.

And, even though video quality was still inferior, bandwidth ranged from 25% to 100% greater for the 720p / low compression camera compared to the 1080p / default one.

IP Camera Manufacturer Compression Comparison on Nov 27, 2017
Despite the use of standards-based video compression (H.264/H.265), our tests...
Comments (22) : Subscribers only. Login. or Join.