However, what frame rate is actually being used in the field today? In this note, we share the responses from over 80 integrators who deploy 1000s of systems around the world. This shows what really is chosen and why it is.

Let's start with a table that breaks down integrator responses: 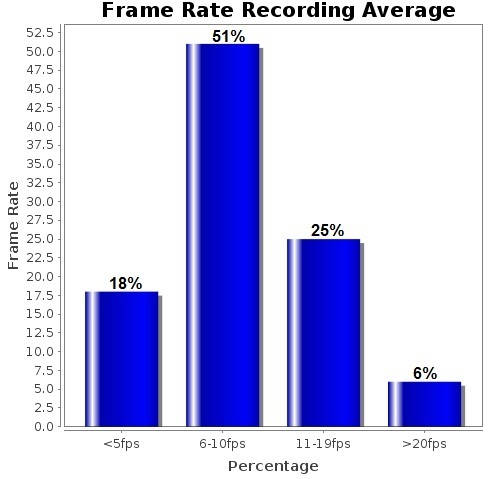 What stands out right away is how low the average frame rate used for video surveillance recording is. Nearly 70% record at 10fps or less, a level that is about 70% less than 'full' frame rate.

To better understand why integrators choose what they did, we asked them to explain their choices.

Integrators using an average of less than 5fps cited:

Not surprisingly, this group is motivated mostly by the cost of storage.

Let's compare to integrators using an average of 6 - 10 fps who represented the majority of respondents:

The 6 - 10fps respondents are the 'balanced' group - use a high enough frame rate for an acceptablely smooth video display but save on storage costs.

Finally, let's look at the smallest group - those choosing 20fps or greater on average:

The few votes and comments we received are consistent with niche demands of specific applications or customers.

6 - 10 fps is the average frame rate used for surveillance recording. It makes a lot of sense because it provides a fairly smooth playback while minimizing storage costs which are still a real factor for the overwhelming number of deployments.

To learn more and see examples of different frame rates in action, see our Frame Rate Training report and the 30 vs 60 FPS shootout.