While gigapixel cameras are one of the hottest topics on IPVM, their dreadful frame rates have restricted them to niche use. Forget about one frame per second, those cameras are lucky to deliver a frame per minute. Now a startup is claiming 600 times faster frame rate with a completely different approach to gigapixel imaging. In this note, we dig into the technical details, pricing, performance and potential limitations.

The AWARE gigapixel platform began as a Duke University research project. After several successes in field tests and a round of DARPA funding [link no longer available], the project has been spun off into a company named Aqueti. The 'first generation' of AWARE cameras have been deployed by the US Navy for maritime port surveillance, and the new company considers video surveillance to be a core application and development focus.

Aqueti's build approach places 'microcameras', or single megapixel cameras into a semi hemispherical frame surrounding the central monocentric lens. Each camera fires simultaneously, capturing a portion of the image focused by the lens, and then assembles that image into a single frame through controller cards on the backend. The rendering below depicts the a typical unit: 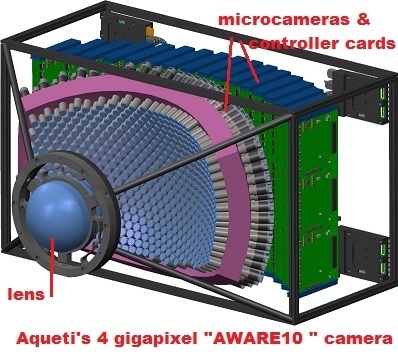 This configuration allows for a very wide FoV - up to 120 degrees wide x 70 degrees tall - to be exposed by a camera with no moving parts and a single lens.

Options for either monochromatic (black/while) or full color images are available.

[UPDATE 2015: The company has pivoted downward in resolution and, at least for now, away from surveillance. More details at the end of the post.]

Size: The enclosure cabinet measures ~2.5' x 2.5' x 1.5', however much of that bulk are the attached compiler cards for the microcameras. If those hardware cards are installed apart from the camera, the footprint of the optics hardware would be less than half.

Monochromatic now, Color later: The AWARE platform is currently built using B/W cameras, and the manufacturer cites this is due to limited testing and development resources during the startup phase. The manufacturer states that initial cameras were built to specific design criteria requiring B/W images. However, Aqueti can build current models using color image cameras and will offer standard color models with the next production release.

For reference, see these examples images [link no longer available] from an AWARE2.0 (1 gigapixel). For an image representative of surveillance applications, select the "Seattle Skyline" image from the list. (Direct linking is not possible due to the webpage requiring the images be seen via the webpage's embedded viewer.) Notice the honeycomb fashion in which each individual camera image is stitched together:

Sample images reveals several types of visual flaws not apparent in other gigapixel offerings. Aqueti recognizes these flaws [link no longer available], and attributes many of them to the protypical nature of early models, many due to microcamera positioning, lens grind methods, and early versions of the stitching software. The company also gives direct feedback on how these problems have been resolved and fixed [link no longer available] moving forward. That noted, users should carefully track the true resolving power of the camera.

The difference in architecture gives Aqueti some advantages over other gigapixel cameras:

However, as Aqueti platform is only now entering production, it has some key drawbacks:

Since gigapixel surveillance is still underdeveloped compared to mainstream offerings, we cannot direct comparison between Aqeuti and even high megapixel offerings. However, clear lines of distinction can be drawn on the following points:

The company aims to develop its own brand and sales, rather than OEM. They are looking for integration partners to build a channel.

This is not an offering that will take over the mainstream in the months ahead but its fundamentally novel approach gives it an opportunity to become a major new force in wide area monitoring in the next five years. However, many risks and issues obviously remain.

Aqueti has pivoted towards events capturing (basketball games, etc.) and is focusing on lower resolution cameras. Their current cameras do a maximum of 250MP at 6fps or 60MP at 24 to 30fps. Also, the output is raw and still not compressed for storage, etc.

Aqueti 100MP Mantis Camera Profile on Apr 14, 2017
One of the original gigapixel camera startups, Aqueti, which we first covered...
ISC West 2017 Best and Worst on Apr 10, 2017
IPVM went to Las Vegas, examining what vendors are showcasing and what is...
Comments : Members only. Login. or Join.