What happens when you want to use biometrics at vehicle gates? In the past, this has meant staffing entry points with guards, and bringing readers to drivers inside their vehicles. However, SRI/Sarnoff demonstrated a new reader named 'IOM PassThru' at ISC West 2013 which they claim completely automates the process of reading irises, regardless of what type of vehicle the driver is sitting inside. Aside from a cool premise, does the IOM solve a real problem for access gates? In this note we examine.

SRI/Sarnoff had a vehicle access gate mockup in their booth at ISC West, simulating a driver's side car door in proximity to the PassThru. In the short video below we captured at the exhibit, you can see the scanning process:

The process demonstrated was quite rapid, with the manufacturer claiming up to ten drivers per minute throughput:

The product was developed to incorporate the 'enhanced security' of biometric iris scanning at vehicle gates, a traditional challenge for most scanners. Traditionally, two options were available:

The 'IOM PassThru' works with the driver seated behind the steering wheel, potentially speeding up the authentication process and making the operation autonomous. Notice in the image below, the IOM is roughly phone-booth sized to allow for a range of vehicles to use it, from low-riding sedans, to high-riding semi trucks. The unit's camera travels up or down to the proper height based on type of vehicle: 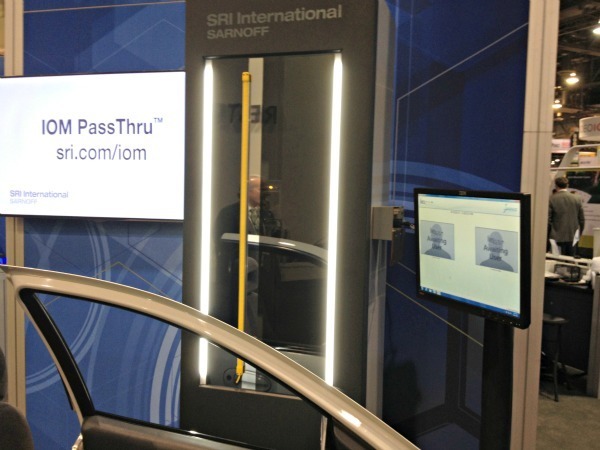 Aside from being useful with a wide range of vehicle traffic, other notable details include:

Because this parameter is not published, we asked the manufacturer 'how close' does the reader need to be to the driver for proper operation. While the person we spoke with did not know the specific range, he suggested that the reader should be mounted between 24" and 32" for the best result.

MSRP pricing is $47,000 USD for the standard PassThru reader. However, the final amount will vary based on design additions like backup power, keypad readers or video surveillance cameras.

Another key module not included in the base price is an 'enrollment scanner' costing ~$13,000. This handheld scanner allows for users to enroll their irises into the database from a remote location like a security office. Without this additional device, irises must be manually added from the PassThru reader itself.

The addition of an enrollment scanner brings the basic cost of the equipment to ~$60,000 for one reader, but does not include installation or access control integration costs.

While this is high compared to standard access readers, it potentially replaces tens of thousands of dollars in manned labor costs and could prove to offset salaries in less that a year's time.

The core value of the IOM PassThru is the addition of unmanned, biometric credentialed access at remote gate locations, potentially increasing the perimeter security of installations.

However, despite the impressive demo on the trade show floor, a number of observed and potential drawbacks exist:

While the manufacturer claims PassThru is for 'anyone with access controlled vehicle gates', the cost and sophistication of the reader effectively limits it to high-security and government installations.

Princeton Identity Access 200 Iris Scanners Examined on Jun 05, 2018
Iris recently registered a big jump as a preferred biometric in our Favorite...
The $1,000 Iris Reader (SRI Tablet) Examined on Apr 19, 2016
Is this the breakthrough needed for iris? The accuracy and resistance to...
Comments (6) : Members only. Login. or Join.