Raytec may have the first ever networked surveillance illuminator [link no longer available]. The big question is what this means. What are the practical benefits of an IP based illuminator and is it worth switching from traditional ones? In this note, we look at this new line, how it compares to existing options, and best potential applications.

For more fundamentals of Vario, see our original update on that release.

For the IP version, while remote control functions are now available via Ethernet, the illuminator requires separate 24VAC power. PoE compatibility is not included in this initial release.

The addition of network connectivity to the Vario line allows remote control via web browser, so a technician does not need to be at the camera/illuminator to make the change. It also allows operators some real-time control of specific functions, such as:

This web interface also allows staff to check illuminator status and troubleshoot issues, by showing current output power, whether all LEDs are functioning, run time, input power, and other parameters. This image shows the first page of the web interface, what operators would generally see: 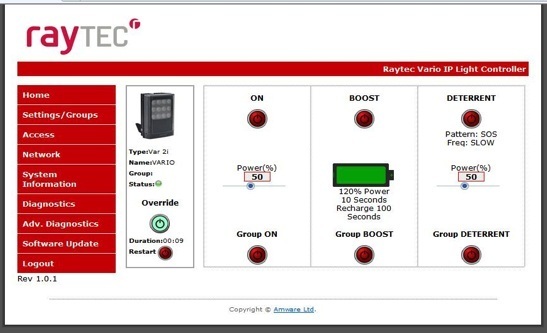 An API, scheduled for release in Q1 2013, will allow VMSs and other 3rd-party products to integrate control of these functions, as well, so they may be triggered from the VMS interface, used in conjunction with alarm actions, etc. However, no VMS integrations are complete now (January 2013).

The original Vario line was priced competitively with other major illuminator manufacturers, such as Bosch and Iluminar. The addition of network control increases will place the IP Vario slightly above these competitors (~$100 USD MSRP), though neither offer the variable lensing or remote control features of the Vario line.

The Vario IP line will also likely draw comparisons to NuOptic's VIS, as both allow for remote control of various illuminator functions, however, there are key feature differences between the two:

Pricing between a Vario IP on the two compares as follows:

For a $100-150 premium, some users may prefer the variable angle of the VIS, as it may more closely match the field of view and be changed without accessing the illuminator. However, NuOptix comes with its own installation challenges, since RS-485 cabling and configuration are required in addition to power.

Raytec also informs us that they offer full design and support assistance to integrators. This includes not only technical support, but 2D and 3D modeling of both white light and infrared illuminators, including target illumination level, not common among illuminator manufacturers.

Currently, the Vario IP's network functions seem most useful for installation and maintenance purposes, instead of live operation. Often, illuminators may be mounted during the construction phase of a project by electrical contractors or lower-level technicians, while final setup and commissioning may not be performed until days or weeks later. The ability to remotely adjust power output during this process, or to compensate for issues found when the system goes live reduces the site visits and the need to physically access the unit for these adjustments. Additionally, troubleshooting information such as LED status, input voltage, etc., may allow a tech to diagnose issues and order replacement without being on site.

When VMS integrations are complete, Vario IP's potential will be greatly increased, especially as more remote zoom cameras come to market. The ability to adjust output power to compensate for changes in the FOVs of these cameras will be useful for assuring quality nighttime video, without overexposure or blooming. Additionally, those using white light illuminators may find patterns to be a useful addition during alarm situations, if they could be triggered easily from the VMS.