Illumination specialist Raytec has released what it describes as the "industry’s first ever Lighting Standard for Video Surveillance Applications – POWERS."

In this note, we examine the tech details of Raytec's specification and its potential impact. 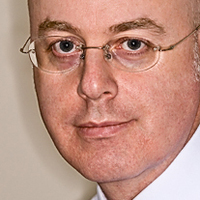 It's good to see a standard being proposed. Having watched their webinar recently, I did ask what wavelength their IR power measurement is taken, as this is not specified in their document. Seems like a fundamental omission when the difference in a camera's output can vary by ~50% when 850nm and 940nm are compared. They did confirm that 850nm is what their spec intends so, hopefully, this will state this clearly in a revised document.

It's specified in their output report which they shared. I've highlighted that part: 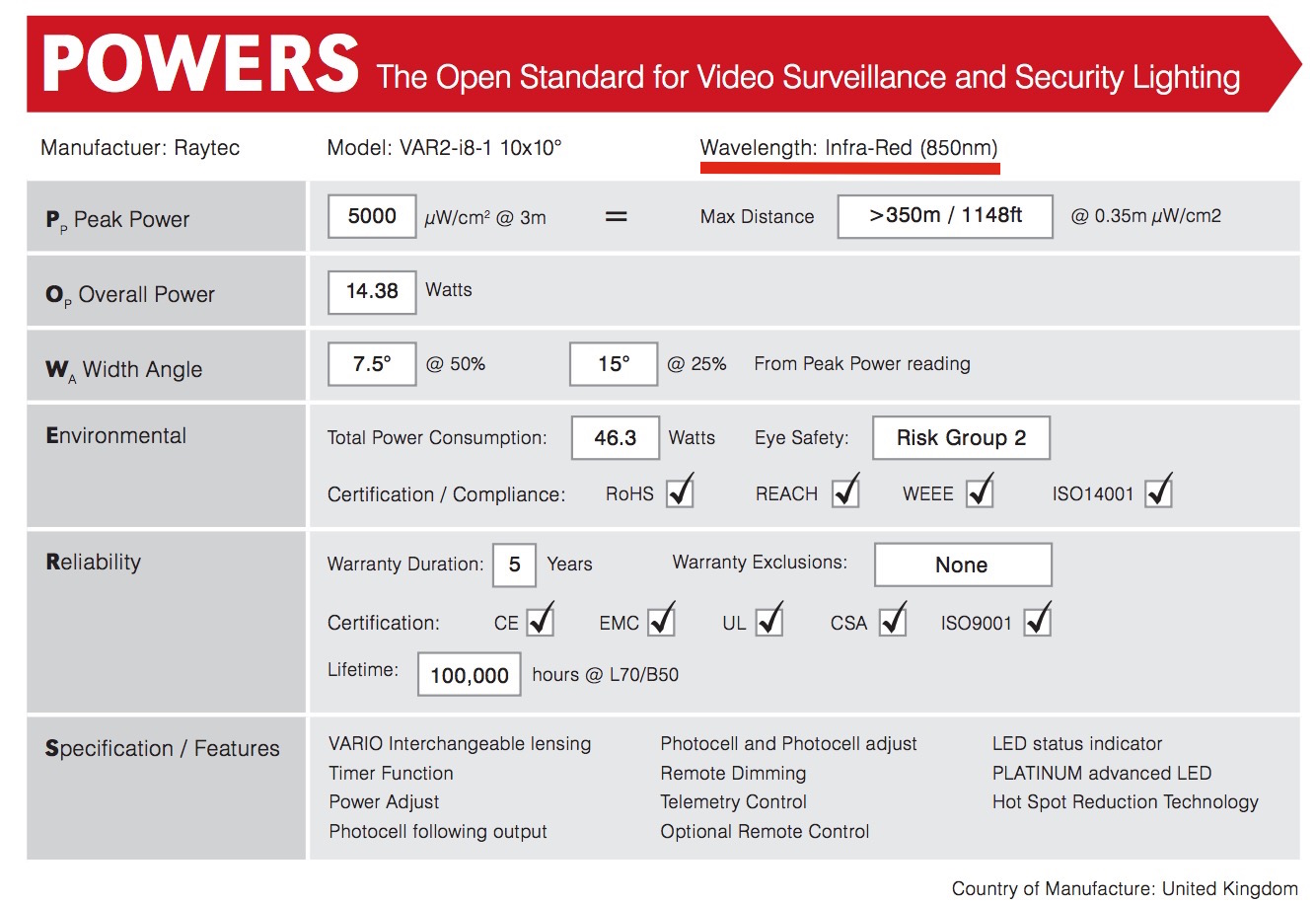 Thanks for your reply, Jon. Yes, I did pick up on that. Forgive me, my OP did not mention their general IR-on-target minimum of 35uW/sq.cm alongside which they do not cite a wavelength.

The spec sheet that you kindly showed is for one of their 850nm products. If it was for a 940nm version would their general requirement for 35uW/sq.cm give a sufficiently bright video? I suspect it would not because of the sensor's fall-off ~50% at longer wavelengths. So, 35uW/sq.cm is fine at 850nm. My point is that they include a statement requiring more power on target at 940nm, e.g. 70uW/sq.cm

So I agree the difference is material and they should note it, it is an edge case.

From listening to the Lambert vs. Lambert portion of the webinar [29:40] it sounds as if Raytec is a bit reluctant to make a categorical recalculation on the basis of the reduced sensitivity of silicon in the longer wavelengths.

The reason they do not intend to do it?

"It would dramatically reduce the distances."

The unspoken implication is that it might conflict with their stated distances.

Inverse power law can be a pain in the ...

Hmm. The laws of physics might not suit their marketing campaigns, but anyone who ignores them is going to disappoint their customers in reality. Is that what they want? Surely believable claims, integrity and reputation are more valuable than glossing over inconveniences (to which every competitor is also subject).

Seems like a fundamental omission when the difference in a camera's output can vary by ~50% when 850nm and 940nm are compared.

Although I agree with you in principal, I have to say that the 35uW figure is probably the weakest part of the specification in any event. Because it still just a stab in the dark, so to speak, at the power required to produce a decent image.

As they point out camera models, subjective preferences etc, are huge factors to begin with, then add in the rate at which low-light technology is improving and the number is obsolete before it even gets started.

To actually be able to connect the dots between an illuminator spec and a camera image would require the camera manufacturers to provide compatible min IR power information, like IRE used to be for visible light.

To be clear, I think that the standard is great for comparing relative performance of illuminators, not so great when extrapolating to expected image quality.

Whatever the acceptable brightness of effective images, whatever the forthcoming improvements in camera sensitivity, the relative difference between 850nm and 940nm in sensor output will likely remain, so a percentage uplift for the longer wavelength remains a valid request.

I'm the Lambert from Raytec..

Just to come back on the two outstanding points:

Undisclosed, you are right the 0.35uW/cm2 is a debatable figure. But we base it on that figure on lots of practical testing to produce a high quality picture for most cameras. You could probably get away with a lower figure (which means many cameras will see further than the quoted distances or you could use a lower power illuminator - but you would need to test first). Historically, olny Raytec and Bosch (0.3) have historically published distance measurement criteria.

This is a bit of a minefield even though John is right about the minor role of 940nm (less than 5% of sales).

We do currently quote that 940nm illuminators produce a 40-50% drop on distance compared to 850nm products - although that is a guide because camera performance is so variable. Let's call it 50% for some maths. Effectively at half the distance there is 4x the power on scene so you could say 940nm distances are currently based on 1.4uW/cm2.

VSaaS Will Hurt Integrators on Aug 06, 2020
VSaaS will hurt integrators, there is no question about that. How much...
Dogs For Coronavirus Screening Examined on Aug 06, 2020
While thermal temperature screening is the surveillance industry's most...
ADT Slides Back, Disappointing Results, Poor Commercial Performance on Aug 06, 2020
While ADT had an incredible start to the week, driven by the Google...
AHJ / Authority Having Jurisdiction Tutorial on Aug 06, 2020
One of the most powerful yet often underappreciated characters in all of the...
SIA Coaches Sellers on NDAA 889B Blacklist Workarounds on Aug 05, 2020
Last month SIA demanded that NDAA 899B "must be delayed". Now that they have...
ADI Returns To Growth, Back To 'Pre-COVID Levels' on Aug 05, 2020
While ADI was hit hard in April, with revenue declining 21%, the company's...
Exposing Fever Tablet Suppliers and 40+ Relabelers on Aug 05, 2020
IPVM has found 40+ USA and EU companies relabeling fever tablets designed,...
Indian Government Restricts PRC Manufacturers From Public Projects on Aug 04, 2020
In a move that mirrors the U.S. government’s ban on Dahua and Hikvision...
Directory of 201 "Fever" Camera Suppliers on Aug 04, 2020
This directory provides a list of "Fever" scanning thermal camera providers...
Face Masks Increase Face Recognition Errors Says NIST on Aug 04, 2020
COVID-19 has led to widespread facemask use, which as IPVM testing has shown...
Dahua Loses Australian Medical Device Approval on Aug 04, 2020
Dahua has cancelled its medical device registration after "discussions" with...
Google Invests in ADT, ADT Stock Soars on Aug 03, 2020
Google has announced a $450 million investment in the Florida-based security...
US Startup Fever Inspect Examined on Aug 03, 2020
Undoubtedly late to fever cameras, this US company, Fever Inspect, led by a...
Motorola Solutions Acquires Pelco on Aug 03, 2020
Motorola Solutions has acquired Pelco, pledging to bring blue back and make...
False: Verkada: "If You Want To Remote View Your Cameras You Need To Punch Holes In Your Firewall" on Jul 31, 2020
Verkada falsely declared to “3,000+ customers”, “300 school districts”, and...