IPVM has ranked interest levels in 95 surveillance manufacturers from most to least. These are the companies covered: 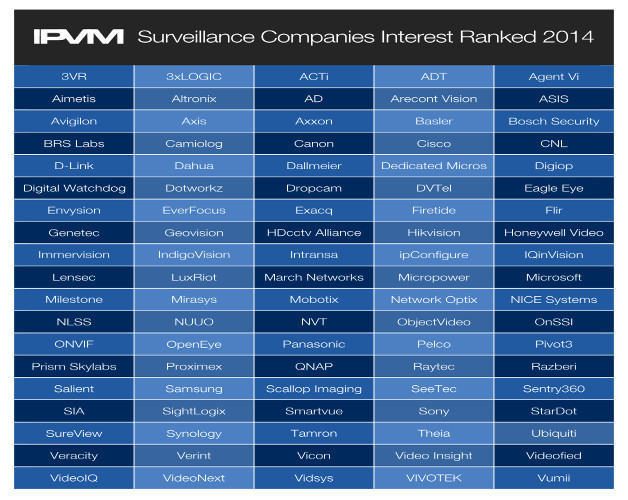 Over 400 IPVM members selected which of these companies they were interested in following, using our unique news monitoring service.

Here is an overview of the results, with the Y axis showing interest level and the X axis, the 95 companies:

As always, IPVM does not allow any promotional use of these rankings. Also, using this to justify product selection is stupid as that should be based on specific application, product fit, etc.

Useful Application of These Rankings

We recommend 2 productive uses of these rankings:

As for IPVM, these results are strongly correlated with readership levels and should give you a better sense of what your fellow members want to be covered.

Given Axis' size and broad support, it should be no surprise that they were the manufacturer members had the most interest in following, at 68%. Indeed, Axis interest was more than 2x that of Pelco's (31%), who held a similar position a decade ago in the analog era.

Avigilon only trailed Axis in interest checking in at 61%. With their fast growth, multiple acquisitions, fund raising and questionable ethics, industry people want to hear about Avigilon. Some people may be surprised because of the speed of Avigilon's ascent, but it is undeniable.

Hikvision generated the 6th most interest (at 43%) reflecting the company's international expansion and huge overall growth (now with $1 Billion revenue).

Chinese peer Dahua also registered with 28% but at notably lower level than Hikvision. We suspect this has to do with their OEM channel model that leads to lower overall company awareness.

Among industry organizations, ONVIF generated, by far, the most interest (at 39%), taking 9th overall, tying Samsung and beating major companies like Sony, Pelco and Panasonic. However, given how broad ONVIF support is and how strongly debated its performance is, this interest is understandable.

No other organization generated even half the interest as ONVIF. ASIS was next at 16% (solid given that more IPVM members are integrators and manufacturers than security managers).

SIA got embarrassed. The Security Industry Association trumpets itself as 'thought leaders' and 'industry experts' but hardly any IPVM members seemed to care, with SIA getting a fraction of the interest of ASIS and, worse, tying for last place overall at a measly 3%.

Here is the ranked chart. Again do not be stupid and use this for promotion or deciding what products to buy:

And here is the same information, presented alphabetically: