Increasingly, users expect their data will never be lost. From using web apps like Google mail to storing files with services like Dropbox, it is easier than ever to keep your data forever. However, what about surveillance video? How common is it for surveillance video to be protected against hard drive loss? In this report, we provide statistics and insights from 100 integrators around the world on their approaches to protecting surveillance storage.

Historically, using RAID for video surveillance has not been common. With relatively large storage amounts at debatable levels of value, the cost of providing redundancy was often significantly more than could be justified. On the other hand, the cost of RAID has clearly dropped and its availability in common products is increasing. Do these trends now reach a point where the majority or most everyone in surveillance is using RAID?

We were curious to see how often it was being deployed in production. In order to see what integrators are really installing in the field, we asked the following question of the 100 respondents to our Winter 2012 poll:

Inside we break down the results in the following manner: 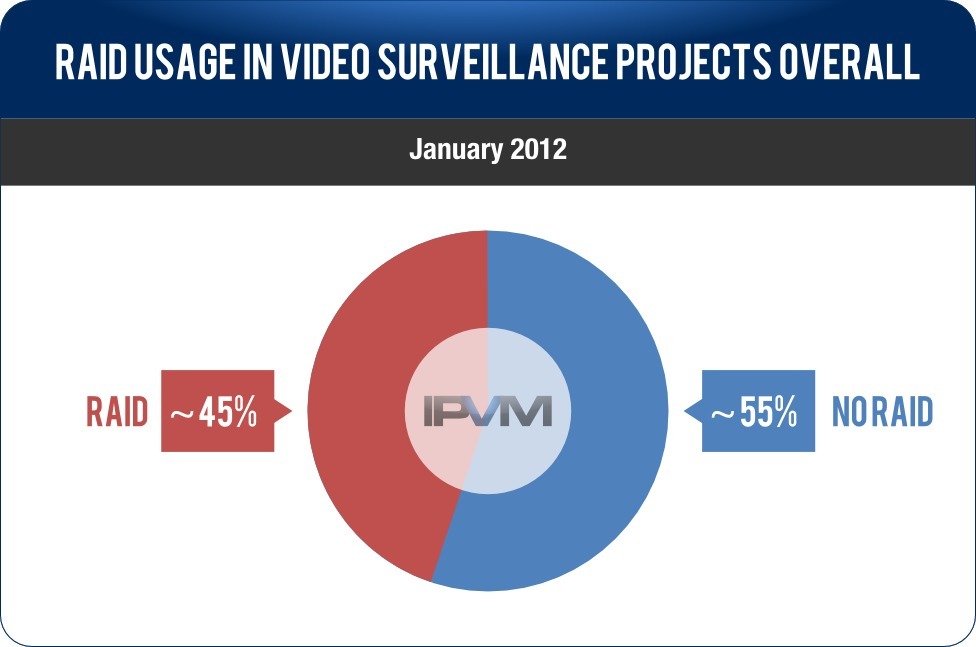 Here we break down usage by integrator. As the table shows, integrators were fairly evenly split in how often they used RAID:

The most common reason given for not deploying RAID was cost. Drives for redundancy and RAID controllers are both added expenses which many systems especially cannot absorb, especially in smaller systems, which often are more accepting of lost video better than larger systems with more intense requirements.

On the flip side, integrators who installed RAID 67% of the time or more answered that video is too important to not use any form of redundancy. Even some of the respondents who rarely installed RAID agreed that generally customers who don't see the value in RAID often regret this decision the first time a drive failure causes lost video.

In smaller systems, cost is often a major factor, leading to options such as RAID being some of the first concessions to be made to reduce the overall price of the system. Larger systems are often deployed in more critical applications with more stringent requirements. In high-security private sector or government applications, lost video is simply unacceptable. Thus, not suprisingly, some sharp differences arise when comparing trends by system size. 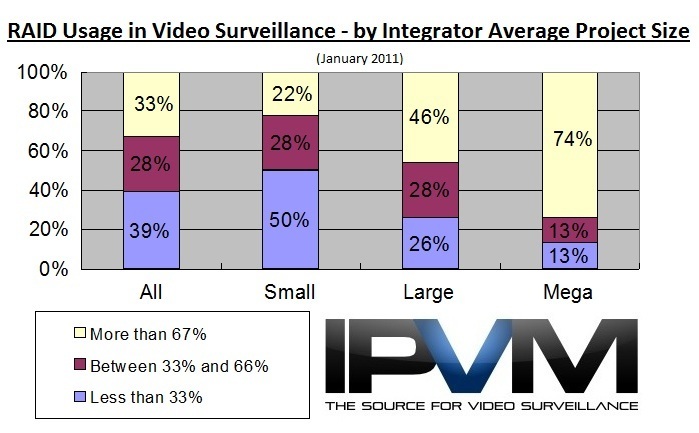 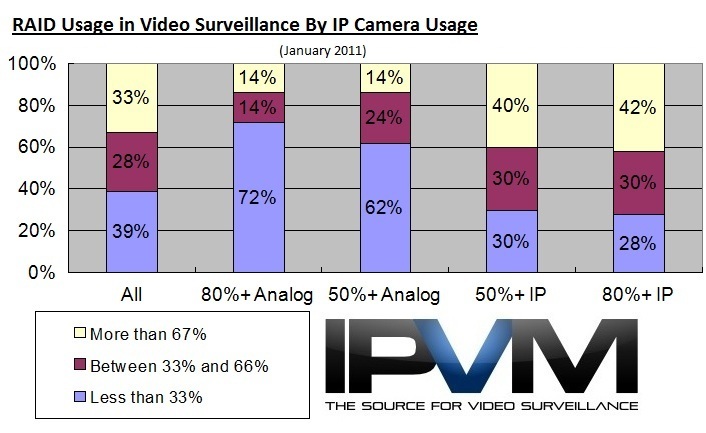 While RAID capability is available in analog DVRs, it is rarely offered standard or even on-board, often requiring expensive external RAID units. Server-based VMS systems are much more likely to incorporate RAID, as it can be implemented when the server is configured relatively inexpensively compared to add-ons to analog systems. While cost factors are likely some of the factor, markets served need to be taken into consideration, as well. The majority of those answering that they are installing more analog than IP cameras named retail, small business, restaurants, and clubs, etc., as their main markets. These typically have much lower budgets and expectations than government or large business accounts, leaving redundancy as an option, not a need.

Video Surveillance Storage Redundancy Statistics 2015 on Oct 27, 2015
100+ integrators answered "What percentage of your projects do you use...
Video Surveillance Statistics Directory Vol 2 on Mar 18, 2012
In this report, we aggregate and present numerous statistics about how...
Comments : Subscribers only. Login. or Join.