These are the most notable moves and events for January - March 2017 in the video surveillance market.

Cybersecurity, once ignored in physical security, is rapidly gaining interest driven by key Q1 2017 events, with the Dahua backdoor impacting Dahua and dozens of their OEMs including FLIR, Honeywell and Tyco plus Hikvision defaulted device mass hacking, and a new Hikvision vulnerability. This builds on the Mirai botnet attacks of Q4 2016 that were primarily driven by video surveillance products.

Hikvision had a tough quarter, on multiple fronts:

Looking toward Q2, Hikvision is releasing a slew of new products (including a new VMS, H.265 cameras, deep learning and more) and will be having a dance demonstration in their ISC West booth.

After a rocky last ~2 years, Avigilon has rebounded recently with improved growth numbers and shifted focus on maximizing profitability. We believe this is done in conjunction / helping with Avigilon buyout negotiations that have occurred throughout Q1.

The 'Tyco-fication' (now JCI) of Exacq accelerated in Q1 with Exacq's 3 co-founders exiting and Exacq shutting down US manufacturing. It will be important to see what other changes happen throughout 2017 to see what happens with new management and increased Tyco integration.

Though Anixter has been selling direct to end users for many years, opposition to this boiled over in Q1 after IPVM reported that Anixter was selling direct to Amazon with 82% of integrators voting to boycott Anixter.

IPVM conducted the first ever manufacturer favorability ranking where integrators voted and explained why they had positive, neutral or negative ratings on 20 companies including: 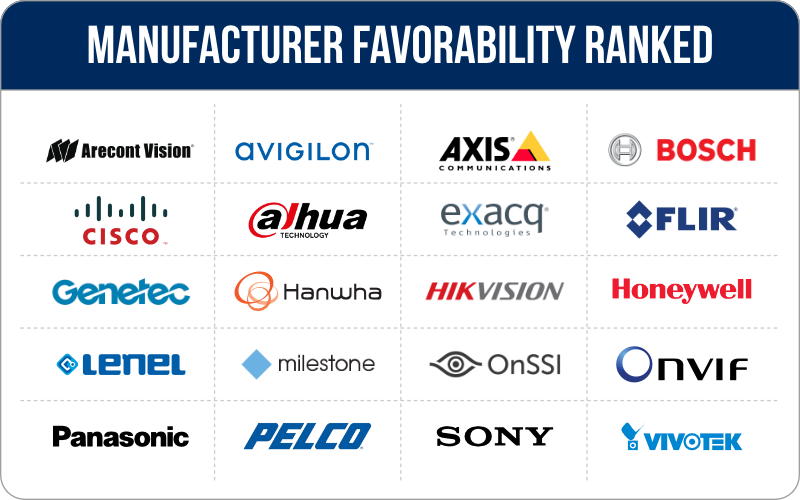 In Q1 2017, IPVM did 10 company profiles to help the industry better understand smaller companies or new entrants, including: