PTZ cameras have been a staple of the industry for years, often being installed as the only means to cover large fields of view. However, with megapixel cameras becoming an everyday occurance, their ability to cover larger fields of view in more detail should theoretically lead to less PTZ usage. In order to find out what integrators are really deploying, we asked 84 integrators how often they are deploying PTZs compared to 3 years ago:

Combining the two "less" options, we see that a total of 53% of respondents are deploying fewer PTZs than they were three years ago, quite a significant number. The number one reason cited for this reduction was the increase in megapixel camera usage.

As we have discussed in the past (see our PTZ vs. Megapixel Shootout), megapixel cameras are not a replacement for PTZs, assuming the PTZ camera is manned by a human operator. If the PTZ is simply set on tour, it is extremely likely to miss activity in areas where it is not currently aimed. 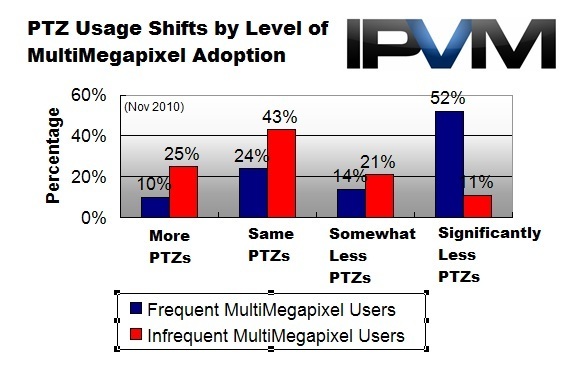 There is a fine balance to be struck between megapixel and PTZ usage. Historically, PTZs were often misused, being installed in applications where no human operator was ever controlling them. This gave end users the illusion of broader coverage, though in reality the camera was less likely to catch actual events. Multi-megapixel cameras, while not a perfect solution, solve some of this issue, by providing better pixel density. However, we see mis-application of these cameras as well, with them being installed in areas where a customer would be better served by having the manual control and increased range of a PTZ.

Multiple respondents cited budget cuts and staff reductions as reasons for adding more fixed cameras instead of PTZs. With budgets shrinking in most verticals, trained security officers are either not hired, or repurposed elsewhere, instead of watching monitors. This drastically reduces PTZ effectiveness, and we have heard numerous complaints from end users regarding PTZs "always looking in the wrong direction".

While PTZs are nowhere near being 'elimated' overall, the trend is clearly shifting away from using PTZs. Based on these numbers we anticipate a steady decline of PTZ use until PTZs are only used for systems where live monitoring is required / available.