One of the most hype market segments of the past few years has been Physical Security Information Management (PSIM). The promise of integrating systems which were not designed to be integrated, and presenting system information to users via a single common interface has sparked the interest of many in the industry. However, skepticism abounds about PSIM's adoption.

In our recent integrator survey, we asked "How Often Do You Deploy PSIM?" The table below shows the results: 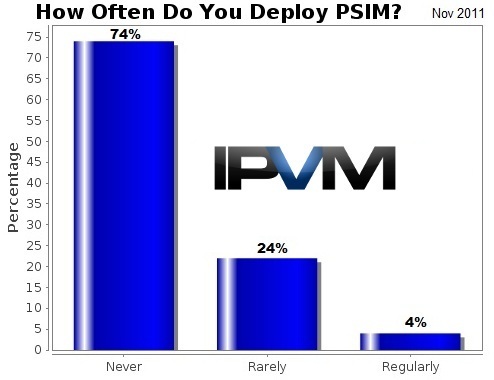 Overwhelmingly integrators are staying far away from PSIM despite the hype. Use is even far below the much maligned video analytic market. This, for a group, who 75% of which are deploying more IP than analog cameras.

There were no clear-cut trends as to which integrators did or did not deploy PSIM. Those answering "rarely" were nearly equal across all deployment sizes (1-16, 17-32, 32+). Additionally, those deploying PSIM did not seem to have a clear favorite VMS. Respondents cited mulitple platforms as their favorites.

The number one most-cited reason for avoiding PSIM was cost. Indeed, this has been the greatest concern of many in the industry, as we've cited in a number of previous reports. PSIM deployments are routinely in the six-figure range, placing them well outside the reach of most customers. Most of the "big" names in the PSIM industry (Proximex, Vidsys, CNL, etc.) do not seem concerned with this, instead focusing on a very small number of high-dollar deployments.

Some quotes from respondents on PSIM's price:

There may be an opportunity for lower-cost PSIM providers to enter the industry and provide much of the functionality of the big names at a fraction of the cost. Recently, we reviewed SureView Systems' Immix, one of these platforms. While it doesn't provide some of the higher-end functions of the better-known PSIM platforms, it does integrate systems which were not built to be integrated, provides mapping and event handling, etc., the bulk of the functions most customers would seek. It will be interesting to see whether providers such as SureView can gain more marketshare for PSIM.

The next most common reason our users were not deploying PSIM was the lack of demand. This is also in line with what we have seen. If there are only a handful of a deployments from each PSIM vendor each year, yet there are thousands of security deployments, PSIM likely makes up below 1% of these deployments.

Much of PSIM's functionality may be realized by utilizing existing VMS and access control platforms which integrate other systems. The top two systems users wish to integrate are video and access control, with intrusion detection and fire alarm following after. Most users do not need the workflow or procedural functions of PSIM. Most end users have also standardized on a single video or access platform across the organization, which makes PSIM's varied third party integrations a moot point.

Despite industry analysts and talking heads hawking PSIM as the next big thing for the past few years, multiple integrators answered that they weren't familiar with the term. Others took it to mean integration of VMS and access control via available out of the box integrations. It is obvious that PSIM does not have the market awareness that mainstream security industry media would have us believe.

Genetec as a PSIM?

Multiple integrators cited Genetec as an alternative to PSIM, with the following comments:

This points to a potential future world where high end VMS applications compete with PSIM head to head.

[Update 2017: PSIM continues to be a niche market, with not a lot of progress and few, if any new entrants. VMSes have become increasingly PSIM competitors, in particular Genetec, which while not calling themselves a PSIM is playing the role of 'PSIM' in many systems.]

Vidsys New President Interviewed on May 31, 2019
A decade ago, PSIM was hot with projections then of a billion dollar market...
Comments : Subscribers only. Login. or Join.