In this report, we put eight readers of the popular 125 kHz contactless format head to head and see which one rises to the top.

Over a third of integrators call 125 kHz 'favorite', and tens of thousands of systems use them every day. So we picked readers from Allegion, HID, and Honeywell and others to see how they stacked up. We also tested the cheapest options we could find, just to see how much price plays a role in better performance:

Inside, see the full report that includes our findings for each reader.

In alphabetical order, here are the pros and cons for the eight models we tested:

We expand on those keys in the sections below.

In our test, the best reader overall was the HID ProxPoint 6005.

While essentially the same reader as the Rosslare AY-KR12B and the Honeywell OP10HON, it offered the best mix of small size, read range, cost, and credential format support. With it's mini-mullion size it offers the best mounting flexibility, and cost ~$55 (or less) online. However, given that pricing for 125 kHz readers can fluxuate from week to week, the price advantage may change if other similar readers (ie: Honeywell OP10HON) are 'on sale' at distributor's counters.

Other notable models include the Farpointe Data P-300HA that performed equal or better in all categories but price, at ~$20 more per reader, and the AWID SR-2400 that was near equal on price and construction, but was one of the largest units - not ideal for mounting in tight spaces. The AWID unit also offered the longest read range of the units tested, often exceeding 6".

For systems where non-HID MIFARE formats are used, 125 kHz reader options are not a practical issue, since the most common DESFire formats use 13.56 MHz credentials.

For our test, we selected six 'mini-mullion' sized readers that all cost less than $80 each and read 125 kHz 'proximity-style' contactless credentials. In all cases, units were available direct (via online resellers) or through national security distribution.

Unit sizes of all units are small enough so mounting directly on door mullions or frames is possible, and external fixtures like single-gang boxes or wall mounting brackets are not needed. Of all reader sizes, the mini-mullion form factor is most commonly used in commercial access control.

In terms of cost, our test readers ranged from a high of ~$80 to less than $17. The chart below shows cost, and illustrates a key factor: HID credential formats support costs more.

While HID Prox, ISOProx, and ProxII is a 125 kHz based credential format, readers must be licensed to read it. 'Generic' 125 kHz readers typically cost 2X - 4X less, but will not work with HID cards.

In our test, equivalent sized CR-80 credentials were used, but Generic readers would not read HID cards, nor would HID readers read Generic cards. Of note, non-HID credentials typically cost less per unit than their HID equivalents - in our example, the HID ProxII cards cost $0.45 each, while non-HID generics cost $0.27 each.

Surprisingly, the lowest cost HID liscened reader was also HID branded, the 'ProxPoint' 6005 that costs ~$50. However, that price was almost 3X greater than the ~$17 'Generic' branded reader that is not HID licensed, nor works with HID credentials.

Our testing shows how important price is in unit selection. For the mainstream security offerings, performance was close enough that the top six selections would be satisfactory in basic systems if variables like read range and unit size were not a factor.

This emphasizes the importance of unit price in selection. As price fluxuates between models, the 'best' selection may be reordered. We recommend price shopping more than just the most familiar reader part number to see if pricing offers a better deal for the same basic device.

The key performance factor for readers is typically how far away they can detect and energize a card, a variable called 'read range'. Our test revealed a strong correlation between unit size (in cubic inches) and their read range (in inches), with one notable exception: 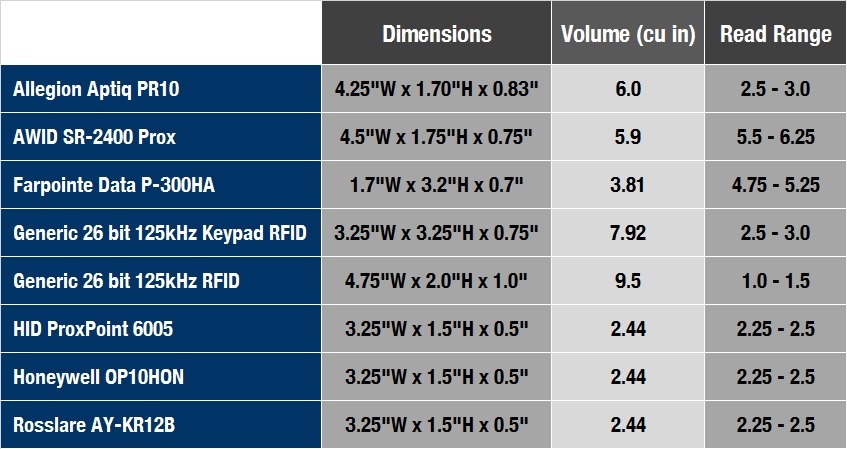 We tested read range by measuring the distance between the face of the reader and a card presented flush, which is the most typical position in field use. Our chart measures this gap, with the longest range being nearly 6 inches and the worst performer averaging just over 1 inch. 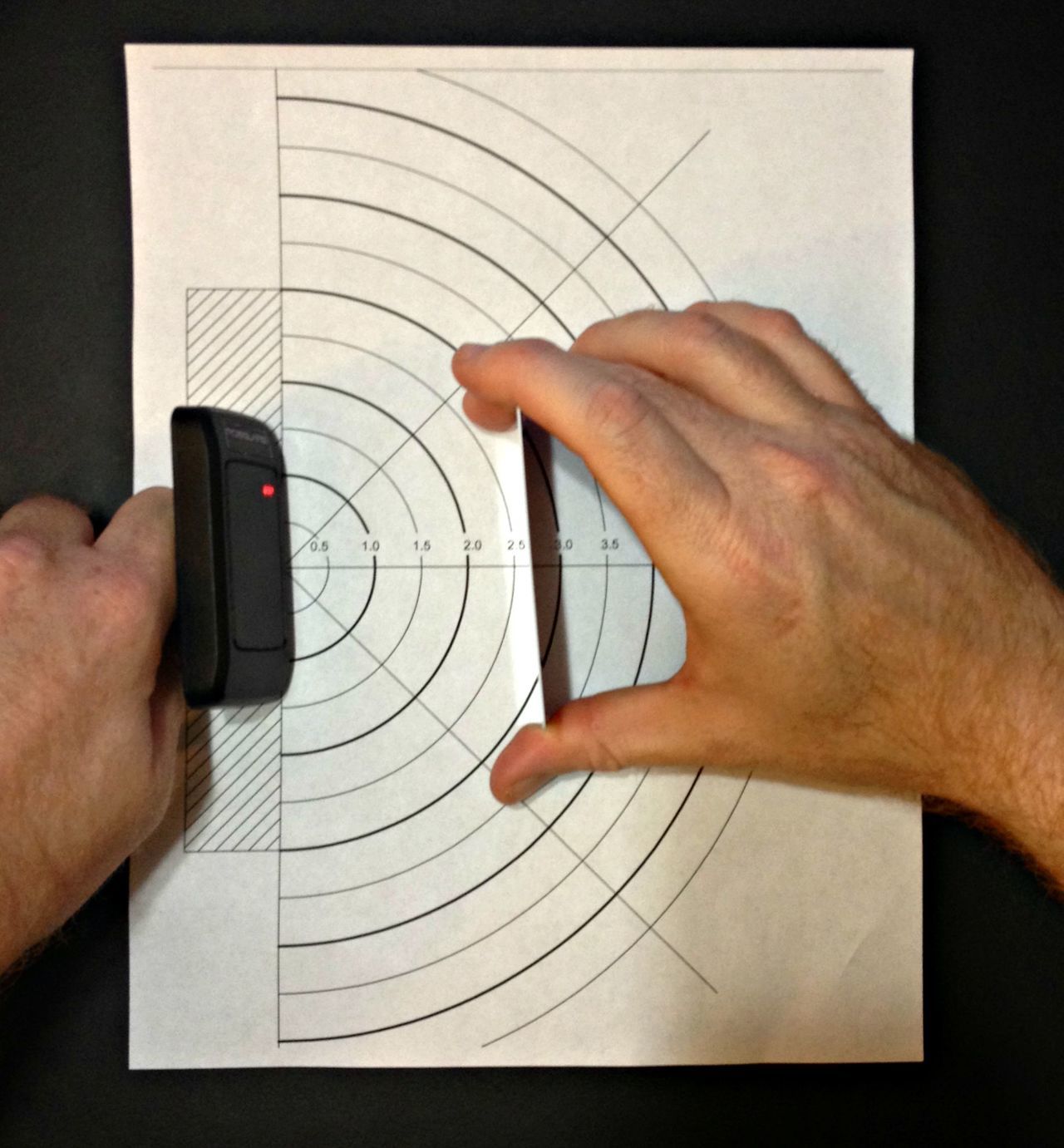 In general, larger units have greater range (see overall volume values for comparasion) due to more space for antenna assemblies. However, the exception to this trend was the largest overall reader, one of the non-HID Generic models. Despite having a large footprint, its range was the shortest at under 1.5 inches.

The longest read range belonged to the AWID SR-2400 that routinely read over 6 inches, with the typical range being about 2.25 inches.

In general, readers will need to be mounted on or very near the controlled opening and allow the card holder easy access to present a card. The only exception to this constraint is the AWID unit, whose ~6 inch range make it suitable to mount on an adjacent wall or bollard if needed.

For our test we connected all readers to an Axis A1001 using standard Weigand protocol and controller pass-through power. In all cases, readers communicated card details without error and with no bad reads.

All of the readers we purchased were rated for outdoor use, although the method of weatherizing the devices varied by manufacturer.

The image below shows both weatherproofing types side by side for contrast: 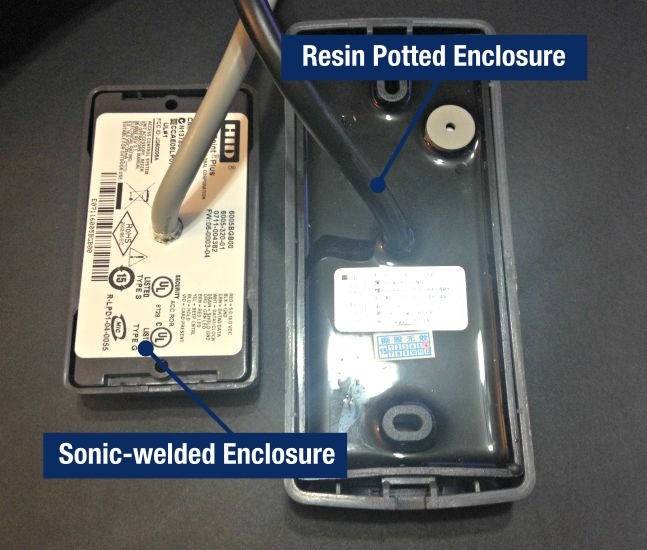 We also checked the readers in our test on the following parameters, and found they all tested similarly with no differentiation: