IPVM has conducted more than 100 polls this year. Here are a selection of 12 of the most interesting results, receiving 4,500+ votes:

In the most commented and debated move of the year, Genetec Expelled Hikvision. Despite Hikvision's far larger market presence, this move was seen as a bigger loss for Hikvision than Genetec, with a clear majority projecting Hikvision to lose more. 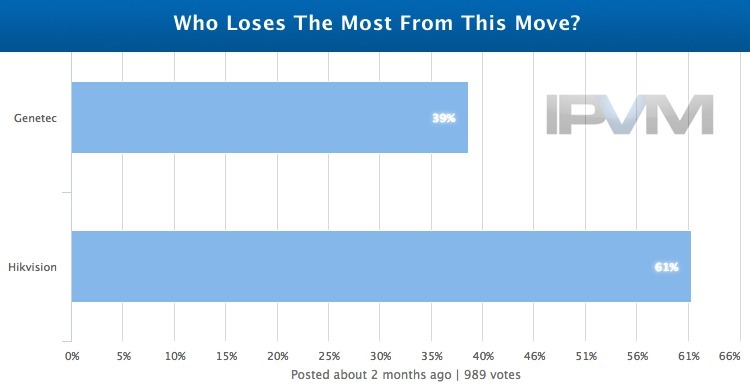 Of course, this incident was only one of a series of big events in 2016 involving concerns over Hikvision's China government ownership and Hikvision cyber security issues.

In that same report, readers overwhelmingly felt that Hikvision devices were untrustworthy, with nearly 3/4 choosing that: 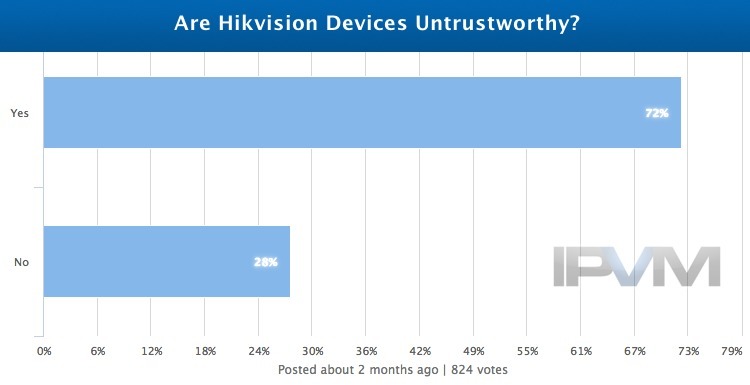 Offsetting that was a modestly lower proportion (63%) of integrator members finding Hikvision devices to be untrustworthy compared to 78% of manufacturers. This poll was conducted before Hikvision's cloud security vulnerability was uncovered.

H.265 has been touting bandwidth savings, but implementations of H.265 are still relatively limited. Meanwhile, Smart CODECs have gained broad awareness and availability from multiple manufacturers. Axis released an updated version of Zipstream, where 77% of members said that smart CODECs were a big benefit, and our Smart CODEC Usage Statistics 2016 guide showed that 20% of deployments are already using this technology today. 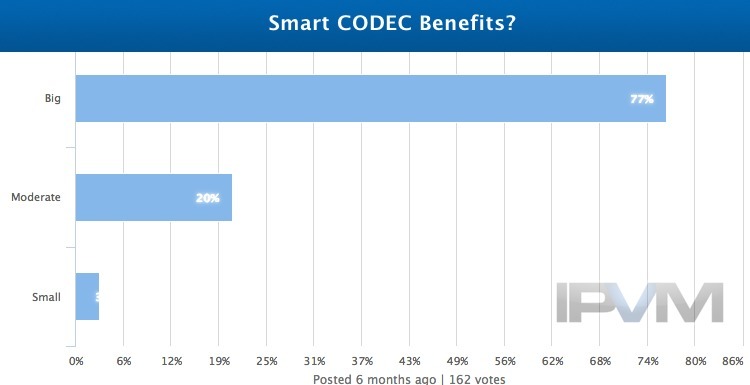 Sony and Bosch combined forces, with Bosch taking over the sales and marketing efforts for Sony outside of Japan, and the two companies collaborating on technology development. The move was seen as making the two companies stronger together, with 58% of votes reflecting this. 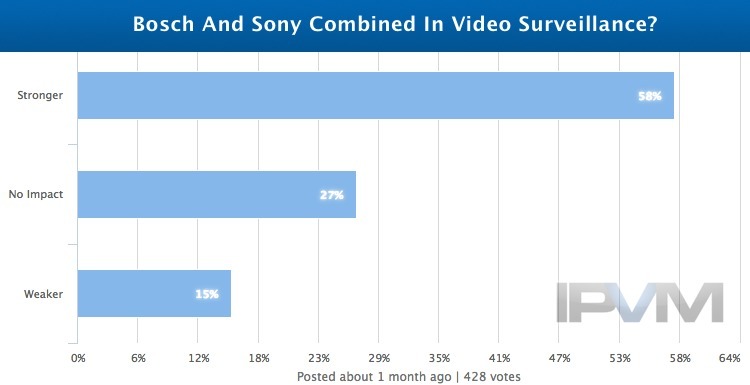 88% of members agree with Genetec, that a "gutting" of mid and low end players is coming. 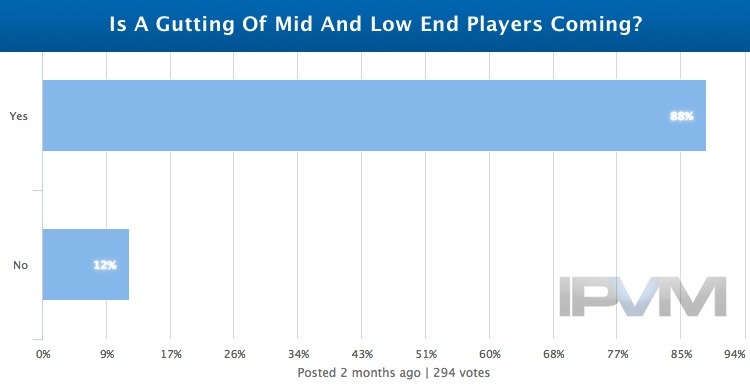 Race to the bottom trends, with low-cost NVRs becoming heavily commoditized, make this gutting a very likely scenario in the coming years.

Despite being a giant in the networking industry, Cisco has not managed to make a dent in the security industry. Cisco / Meraki launched one of the highest priced 720p cameras in years, 84% of IPVM members voted that this will not be a successful venture for Cisco/Meraki. 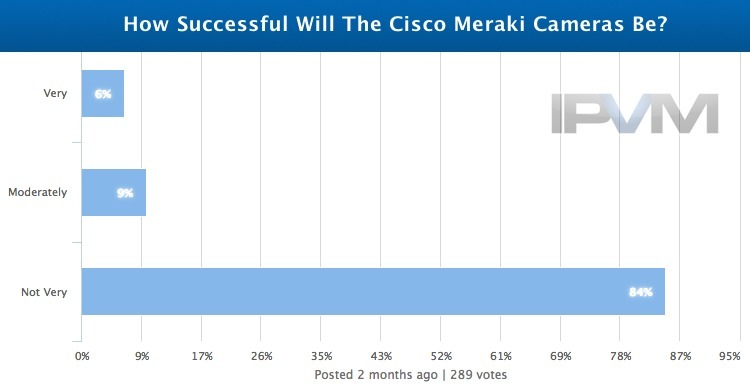 While Cisco Meraki may not be successful for or through security integrators, Cisco still has a sizable channel and customer base of their own to target.

Large Systems No Excuse For Outages

A surveillance system in the city of Dallas, TX came under scrutiny after the murder of 5 police officers in June 2016, when it was revealed that only 80% of the cameras were online and working. Representatives from the city were OK with an impaired system, but IPVM readers felt that much higher functionality should be considered a reasonable expectation, 96% of responses indicated the city should be able to cut the number of non-functional cameras in half, to 10% or less. 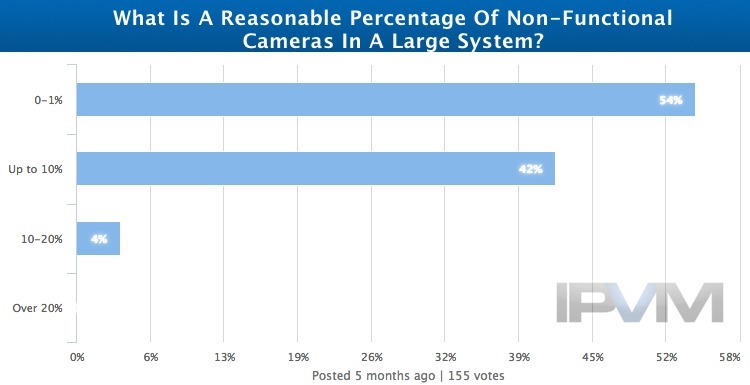 Mid-year, Dahua Faked Being American, calling themselves a "California Treasure". 91% of readers saw through this, disagreeing with Dahua's position. 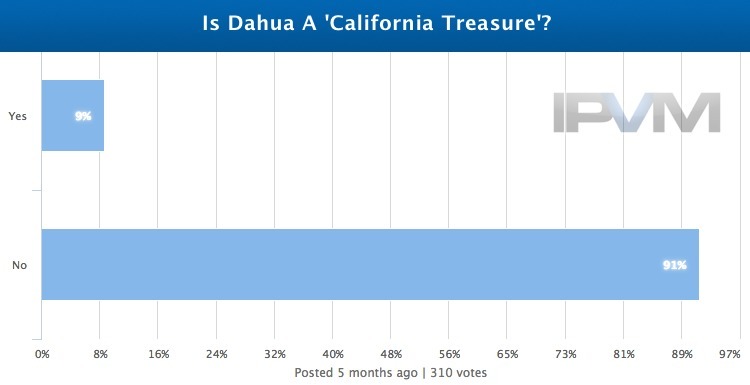 Dahua had better results with their "We're Not Owned By The Chinese Government" tactic, where 77% of readers felt that was a good way for Dahua to differentiate themselves.

The G4S security guard who murdered 49 people at Orlando's Pulse Nightclub had a history of problems. G4S was made aware of incidents involving the guard, but defended him as the victim of a hostile work environment.

71% of IPVM readers felt that G4S should have been more aware of the guard's potential for violence. 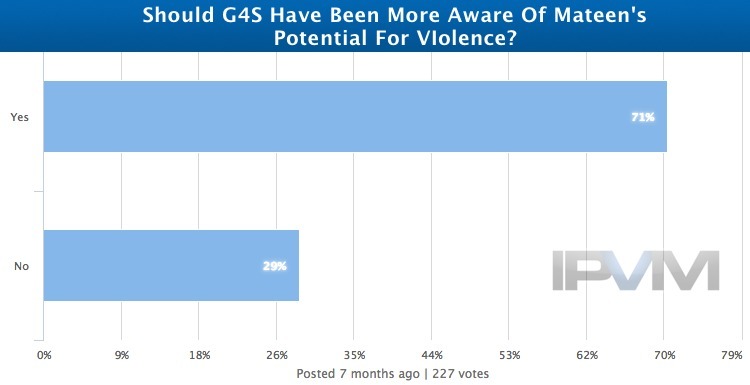 In October, Axis said HD analog would die out, but IPVM readers do not see this happening, three quarters predicting that HD analog will not die out in the next few years. 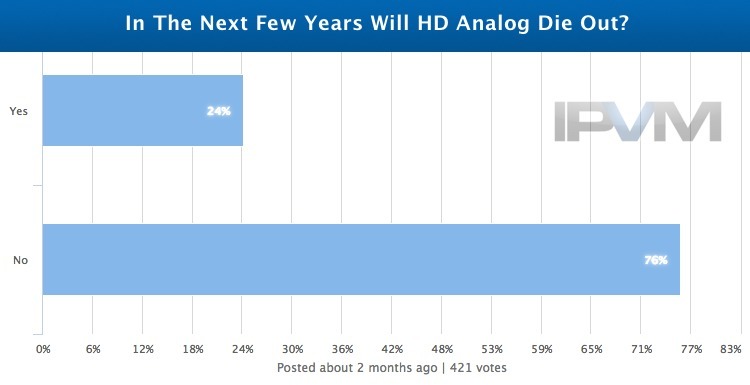 Anixter's policy on supporting direct end-user sales was further proven when we covered Anixter employees specifically dedicated to this practice and Anixter's CEO touting end user sales. 79% of responses to our poll showed this to be a bad business move for Anixter. 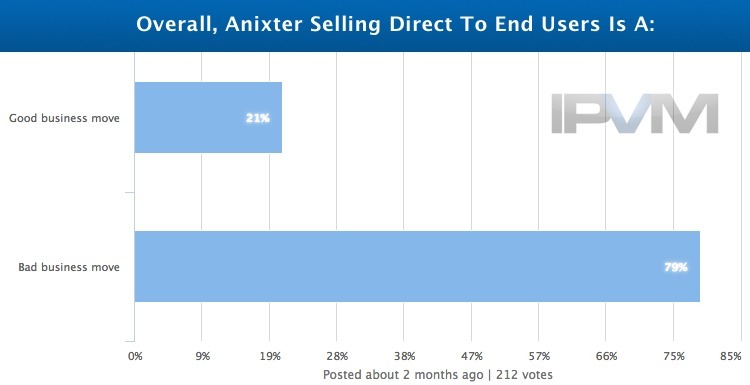 However, one segment bucked the trend, with 70% of end users saying this was a good move, a useful reminder that while integrators may dislike this strongly, users do not.

95% of IPVM members say they do not want Hikvision automatically phoning home. 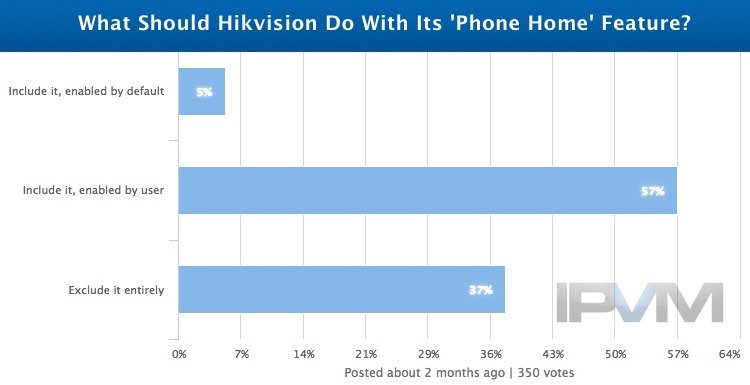 This is a growing issue especially since Hikvision has 'determined to discontinue' its DDNS service which historically was widely used for remote user viewing.

IPVM polls are open to members only and each member can only vote once. Given that members pay for membership, this means a higher likelihood for serious professional votes vs an open Internet poll. Moreover, since poll voters must be logged in, there is no chance of 'stuffing' / 'rigging' the vote.

Of course, like any poll, it is limited by who decides to take it. While our experience is that poll (and survey) votes reflect general industry views quite well, one is certainly free to dispute these results, especially if they run counter to own's interests.

Even More Polls Coming In 2017

IPVM polls receive far more votes than any industry source, allowing for insights and reactions to industry trends and news. Expect to see more polls in 2017 on business trends, technical reports, and other events that define the security industry.