Justin Bieber and Why Jail Bathroom Surveillance Cameras Are Legal

Many questioned why the police had surveillance cameras in the bathroom. Do not bathrooms have a reasonable expectation of privacy [link no longer available]?

We talked to the Miami Beach Police Department about why the cameras are there and found out why the police department says they are exempt from that part of Florida’s surveillance law.

Florida is one of 13 states that prohibits video camera recording private in places like bathrooms, locker rooms, and dressing rooms or where people are “exposing a sexual organ,” however the Florida statute does not apply in cases where:

In the case of the Bieber video, all apply, according to the police department.

Technically the Cameras Aren’t in a 'Bathroom'

The Miami Beach police department says this video would not fall into the category of a bathroom, locker room or dressing room either.

“That is actually a temporary holding cell that just happens to have a toilet in there,” said a police department spokesperson. “It’s not a restroom per se. It’s a cell. That law doesn’t apply to jail cells. If it was an actual dedicated restroom it would. We have jail cells with urinals in them.”

The spokesman said the cameras are there because guards have to be able to see the entire cell to make sure a person doesn’t try to harm themselves or someone else. The cameras are monitored live 24/7.

He said the part of the law regarding exposed sexual organs also doesn’t apply because, “There’s also a metal divider that actually covers the private area.”

The Miami Beach PD says there have been no legal challenges to the cameras facing the urinals in its holding cells.

If not, does that also mean that bathroom cameras are fair game in Florida as long as there is signage, and there are stalls or dividers between urinals?

A Case out of Washington

There is a pending case in Washington State that deals with bathrooms in holding cells. Several women are suing the Pyallup police department for recording them while using the bathroom in holding cells. They are suing for privacy and civil rights violations. They say they had a reasonable expectation of privacy. The city attorney argues that a person doesn't have an expectation of privacy [link no longer available] when they go to jail.

There are no dividers blocking the person from the view of the camera in the holding cells. The image below was pulled from the security system and attached to the lawsuit (the black bar was added after the fact): 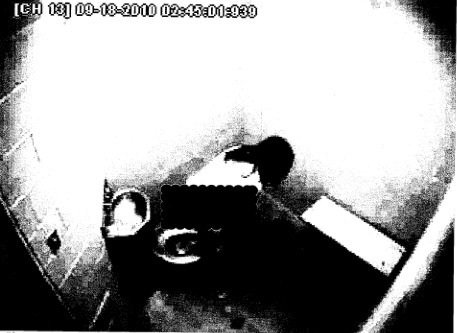