Bad RFPs continue to plague the industry. In the case of one city, a poorly written RFP led to a contract that likely fails to address one of the main problems they were hoping to avoid. In this note, we review the RFP and what this Illinois city plans to do.

Here are the basic requirements from the three-page train station RFP:

To their credit, it does contain a few picture that show roughly where the cameras should be / look at, like so:

But that is pretty much it. No other major technical details or requirements.

What they got was an "IVACS", a customizable SQL Server-based DVR system by Closed Circuit Innovations. 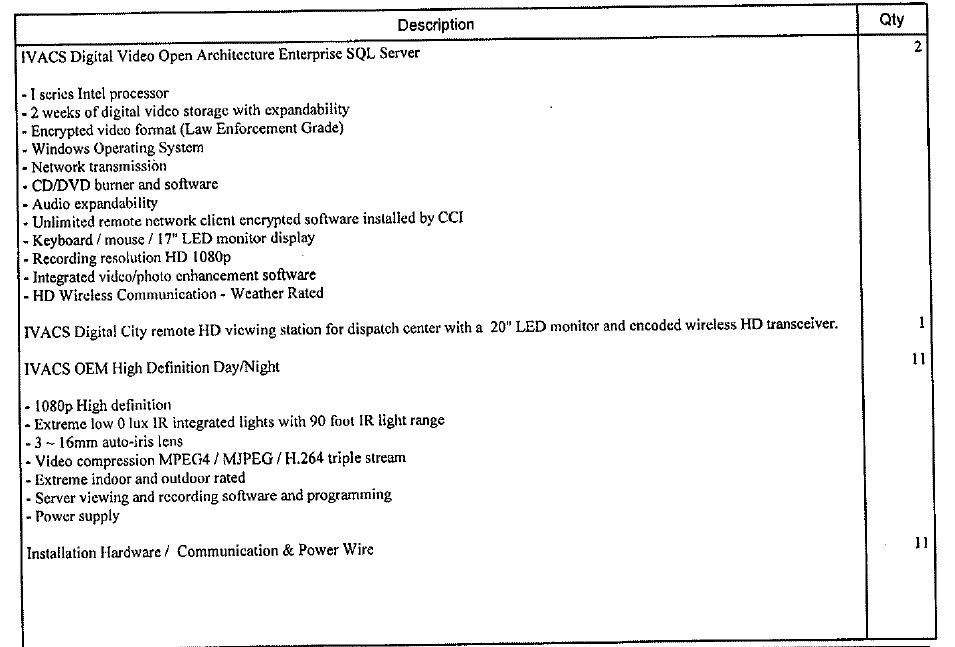 The integrator, CCI, says it builds all of its equipment, including cameras to suit the specific needs of individual projects, but declined giving technical specifications of the equipment to "keep it from being revealed to competitors that could bid against it."

The cameras were custom built for the job from OemCameras.com. CCI says they also build mobile computers for police and military.  However, the camera specifications are fairly generic - IR, auto-iris, varifocal, outdoor rated - without any listing of advanced capabilities - e.g., WDR, smart IR, etc.

La Grange police chief Michael Holub says a main concern is exterior cameras that will be facing east and west as well as the cameras placed parallel to the tracks. During sunrise/sunset, they will be blasted with sunlight. This goes especially for the cameras on along the tracks where no trees or buildings block the sunlight.

The police chief said that this is something he discussed with the companies who submitted proposals, but it was not included in the RFP.

CCI declined to say whether the cameras they built use WDR, but did say the cameras would be mounted as to reduce exposure to direct sunlight at sunrise and sunset. "If there's going to be sunshine on the cameras, you don't aim them toward the sky. Some installers face them up toward the sky, and that's not what you don't want to do. You mount it below the treeline. I've been in this business since 1988," said Steve Coan, the owner of the company.

CCI says the cameras will have sun visors too.

Holub said he wrote the RFP himself, which is why it is light on technical specifications. He says his needs were pretty basic.

"I needed some interior views and some exterior views in two high-profile commuter stations with platforms on either side of the track. I wanted inbound and outbound ways to be monitored. There were no camera specs. There was not a lot of specificity or a lot of technical things. To be honest, I wouldn't know what to ask for. I'm a non-techie person," he said. "I told people the scope of the project I wanted. I took pictures and said 'These are the images I'm trying to capture' and I think that's what is important. You telling me the name of the system is the first time I've heard it."

On the other hand, given that the Chief described the objective verbally, but not in writing, this is not a technical issue but a procedural flaw, i.e., if the sunrise / sunset issue was cited in the RFP, the city could at least have demanded performance enhancements / optimizations.

The losing proposals were unavailable, however this bidding summary was:

Public contracting documents say the integrator, Closed Circuit Innovations, got the contract because it was the only one that met the city's budget requirements and specifications. CCI has done similar installs at stations [link no longer available] in Illinois before and was the sole surveillance provider for another Illinois city for more than seven years.

The lowest price came from, Forest Security was not chosen because of "lack of clarity on how the images would be sent to our dispatch center" and "no reference to relocating or moving the cameras due to concurrent renovations," the chief said. Additionally, the city already has a mesh network built by CCI, according to city council documents.

End users have to put their needs in writing. Verbal suggestions are not enough and routinely lead to disappointing results. Defeating sunrise / sunset glare is hard to do but it is nearly impossible if it simply omitted from the RFP and the winning bidder provides generic OEMed cameras that unfortunately do fulfill the vague requirements inside but not the real needs of the user.