A school district in Pennsylvania wants to make the most its expanded wireless network by not only using it for surveillance, but having it support sporting events too. We take a look at the upcoming installation and what issues could arise from such dual use.

After its old cameras were damaged during renovations almost 10 years ago, Mechanicsburg High School decided to overhaul the system. New cameras were installed in the school, but the school just recently granted funding to add cameras and a wireless network to cover the school’s student parking lot.

This installation would expand the school’s existing Aruba wireless network to support three surveillance cameras and sporting events at the stadium. The lot is in the middle of the football field, baseball field and tennis courts. See image below (the possible pole locations are marked with and "X."

The school wants sporting and security running over the existing LAN but requires that it "does not interfere with, or detract from" each other. 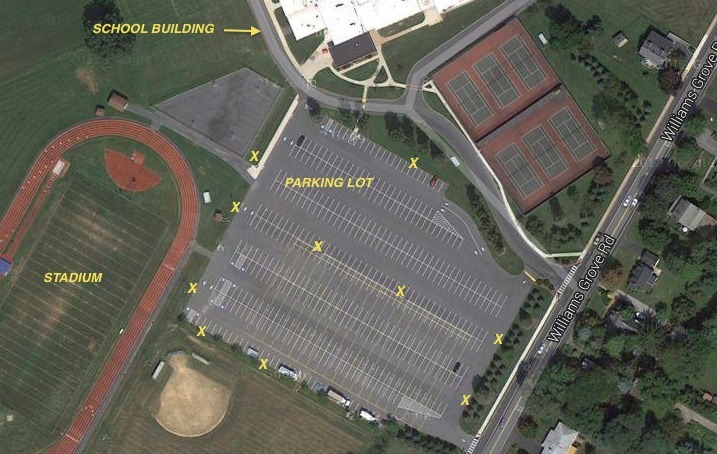 The one-paragraph statement of work includes three GeoVision bullet cameras [link no longer available], installation and a one year warranty for $5,700. There is no signed contract for this work, and it was verbally authorized, according to the school’s assistant superintendent. The cameras will be mounted onto existing light poles in the parking lot. There are about a half dozen light poles,and neither contract says which ones the cameras will be mounted. The farthest pole is about 550 feet from the school building (the closest is about 100 feet).

The documents provide no details on what the network will be used for in regard to sporting events, but the school will need to plan more carefully to limit one or the other during peak times. Peak times for camera bandwidth will be when school begins or lets out, while peaks for games will be in the evenings or at night. Times when they may overlap are as people leave and arrive at games using that parking lot.

To do this, it looks like the school is restricting a section of bandwidth solely for security cameras:

In addition to limiting security camera bandwidth (but no mention of capping other bandwidth), there are a couple things that make it seem like cameras may have been the secondary reason for this system.

Aruba networks are an expensive wireless solution for just a few GeoVision cameras. It's understandable that the school wanted to go with equipment that matches what they already have, but it is not clear the number of cameras the school already has.

It seems strange that a school district would rely on a verbal contract for the cameras instead of putting the details in writing. There is a striking difference between the three-line camera contract and 22-page statement of work for the wireless network. Also, it is not clear who is responsible for maintenance and repair of the cameras.