Panoramic cameras have been around for more than a decade but only in the last 3 years has there been an explosion of vendor support. Now, nearly every camera manufacturer offers panoramic cameras.

What has that done to adoption?

In this note, we share unique IPVM survey results on what percentage of panoramic cameras are used, why they are being used and what reasons integrators have not to use them.

Panoramic camera use is very low, coming in at just 4%: 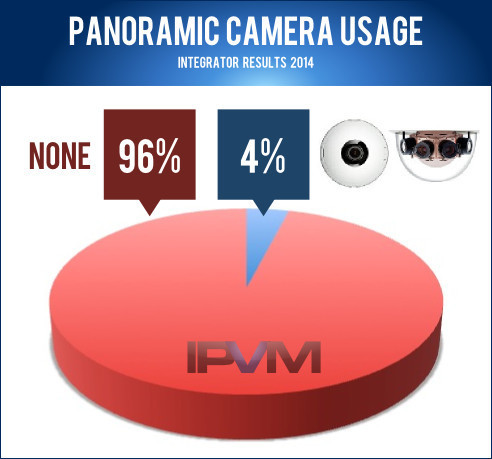 On the other hand, 3 years ago, panoramic was certainly under 1% as only a few niche vendors offered them.

For every integrator surveyed, panoramic cameras were a niche, with no one saying they used panoramics more than 20% of the time: 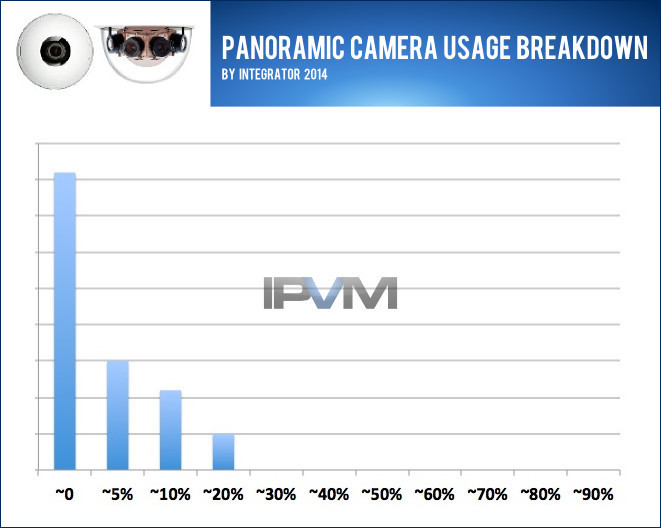 That we expect to largely remain, given their unique pros and cons. However, since ~75% have not used panoramics ever, there is a lot of upside yet.

Camera replacement was the main stated advantage of panoramic cameras:

Of course, camera replacement is not magic. As other integrators mentioned, there are issues with the detail that panoramics deliver:

The detail problems are a simple geometry issue. The FoV of panoramic cameras are routinely 3 to 10x wider than traditional cameras. The upside is capturing a wider area, the downside is less details at any specific spot in that area.

Here's the detail at just 12 feet away from the camera with panoramics:

Arecont is, by far, the largest provider of multi-imager panoramics. Their main upside is that they combine multiple imagers in a single unit instead of just a single one with a super wide FoV. However, integrator's comments here mirrored findings in our 2014 Worst IP camera survey, with respondents noting:

Integrators Bullish About Expanding Use

The most common theme of integrators on panoramics was about how they were going to use more panoramics in the near future:

Only one integrator noted the low light problems of these cameras. However, we believe as panoramic use grows it is going to be an increasing problem. It's essentially inevitable to have poor native low light since panoramics combine high F stop lenses (f/2.0 or higher typical) and higher resolution cameras (5MP or higher is increasingly common). This is why we believe integrated IR for panoramics is an attractive growth area for manufacturers (e.g., see Hikvision IR Panoramic Camera Tested).

Panoramic Camera Usage Rising 2017 on May 08, 2017
Panoramic camera usage (including fisheye and multi-imagers) continue to rise...
Comments (4) : Subscribers only. Login. or Join.