Panoramic cameras are one of the hottest growing markets within surveillance. The combination of multi-megapixel resolution and super wide FoVs claims to deliver greater coverage than conventional cameras. But how well do they work and how do the options compare?

We did tests in even, well lit scenes, in multiple levels of darkness, and in WDR conditions.

Here are two unmarked excerpts showing the range of differences in performance: 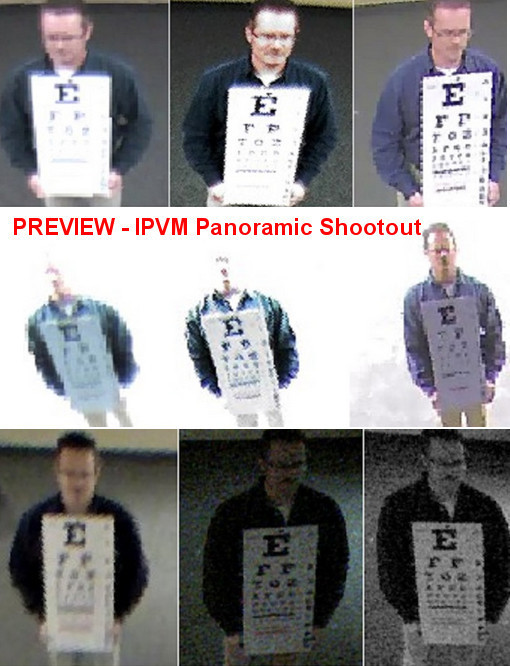 Inside, we offer full test results.

In this shootout, more than many others, citing overall winners is difficult. Every camera we tested had positives and negatives in image quality, WDR and low light performance, VMS integration, and control. Because of this, we separated our findings into the following:

We will release individual manufacturer reports in an upcoming series, with more in-depth testing of each of these.

In more general terms, this shootout also revealed a number of general issues and observations:

We tested nine cameras in our shootout, from six manufacturers, with varying resolutions and featuresets. Following is an overview of each model, outlining key differences:

We tested these cameras using Video Insight 5.5, since it is one of the only VMSs supporting all of them, in one way or another. Cameras were left defaulted, with only exposure settings standardized for low-light scenes.

In the course of our tests, we found several notable difference in imaging and integration among the tested cameras. We've detailed these in a series of videos, below:

Since all dewarping, whether on camera or client side, is creating a rectangular image from a round fisheye view, various forms of distortion will occur. When using panoramic display modes, for example, horizontal lines will not be straight. On the other hand, when using fully dewarped views, vertical lines may not be vertical, and the image may be "keystoned." We examine these issues in this screencast:

In addition to distortion from dewarping, cameras may be skewed by off-level mounting. In slight cases, it may not be an issue. In more severe cases, the camera's dewarping may be affected, or pre-defined views innefective. Some cameras allow adjustment for this, while others must simply be re-mounted level to the ground.

This screencast reviews an issue unique to fisheye cameras, created when the camera's lens extends past the imager, creating blank areas when the image is dewarped and flattened. Depending on how the camera is oriented, this blank "divot" may extend into the FOV, partially obscuring it. Of the models we tested, only Sentry360 allowed for adjustment to the dewarped area to compensate for this. This issue is best seen, as it's difficult to describe in words:

PTZ Control Camera vs. Client Side

In this screencast we show the differences in virtual PTZ control when using client and camera side dewarping. Client side dewarping resulted in much quicker pan/tilt control, since no commands needed to be sent to the camera, and dewarping was done on the faster processor of our client PC. Latency in camera side control varied, but was generally at least a second, at best.

Some models which dewarped camera side could be controlled via VMS PTZ controls (Axis, Panasonic). Others, such as Mobotix, recorded the view which was set in the camera's web interface. This screencast illustrates the differences between these two.

Client vs. Camera Side Archived Video

This screencast illustrates one of the key advantages to client-side dewarping integration: virtual PTZ in archived video. While camera-side dewarping has an advantage in that it does not require custom SDK integration to dewarp video, the VMS only records what the camera was displaying at the time, whether it be a panoramic view, custom view area, etc.

A Note About Comparison Images

In our comparisons, every effort was made to set the camera's virtual "field of view" similarly. That is, the direction and digital zoom level of the dewarping, whether on camera or dewarped in the VMS client. However, since all cameras are dewarped slightly differently and no two lenses are identical, or identically mounted in every camera, differences do occur. This can be seen in our comparisons, with some looking more angled, not quite level, in different proportions, etc. To try and equalize comparison images as best as possible, we tried to set the scene using the size of the letter E on the test chart for reference, as this was the simplest objective size reference in our test shots.

Our first, and easiest comparison, we tested all cameras at 6' range under full lights. Resolution was the most impactful factor here, with the 1.3MP Q1604 with ImmerVision lens immediately less clear than other cameras due to its lower pixel count. However, we found several cameras had issues compensating for the light in the room, with the chart becoming washed out in Mobotix's monochrome Q24 and Sentry360's cameras, reducing clarity. Most cameras were fairly accurate in their proportions of the subject. However, in this and other tests, Sentry360's 3MP FS-IP3000 displayed objects as a bit wider than they really are, and ImmerVision shows our subject as taller and thinner. 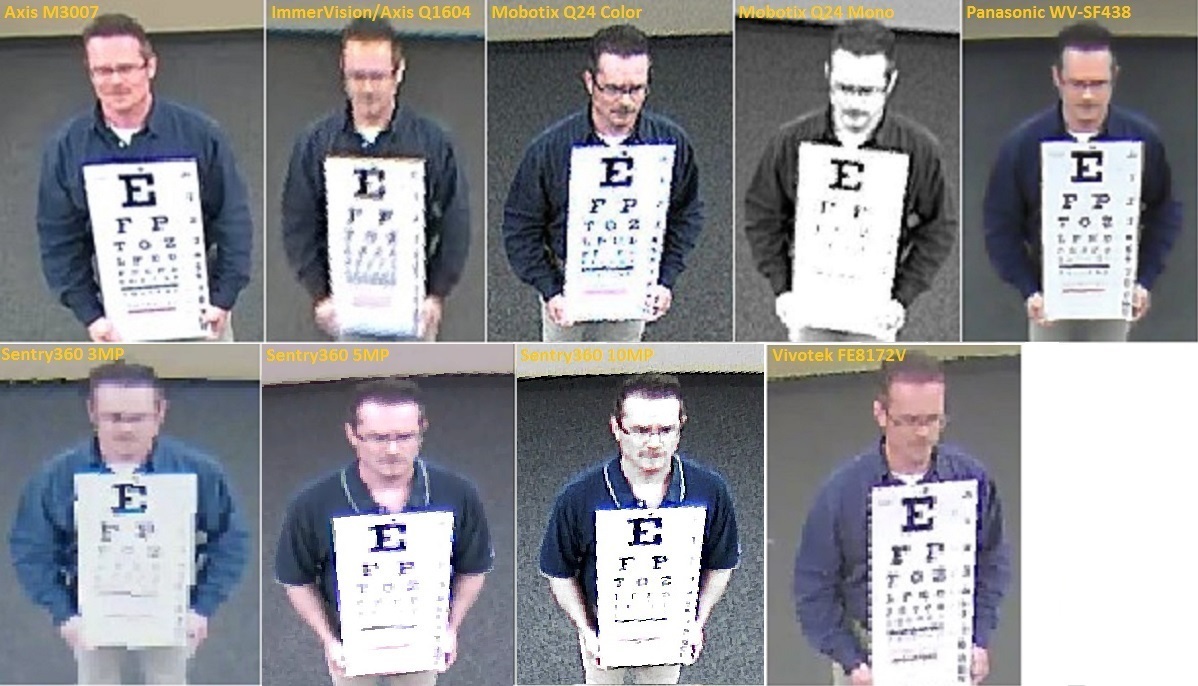 At 12' range, we can see that the chart becomes much less readable on all cameras, and the subject's features become harder to distinguish. 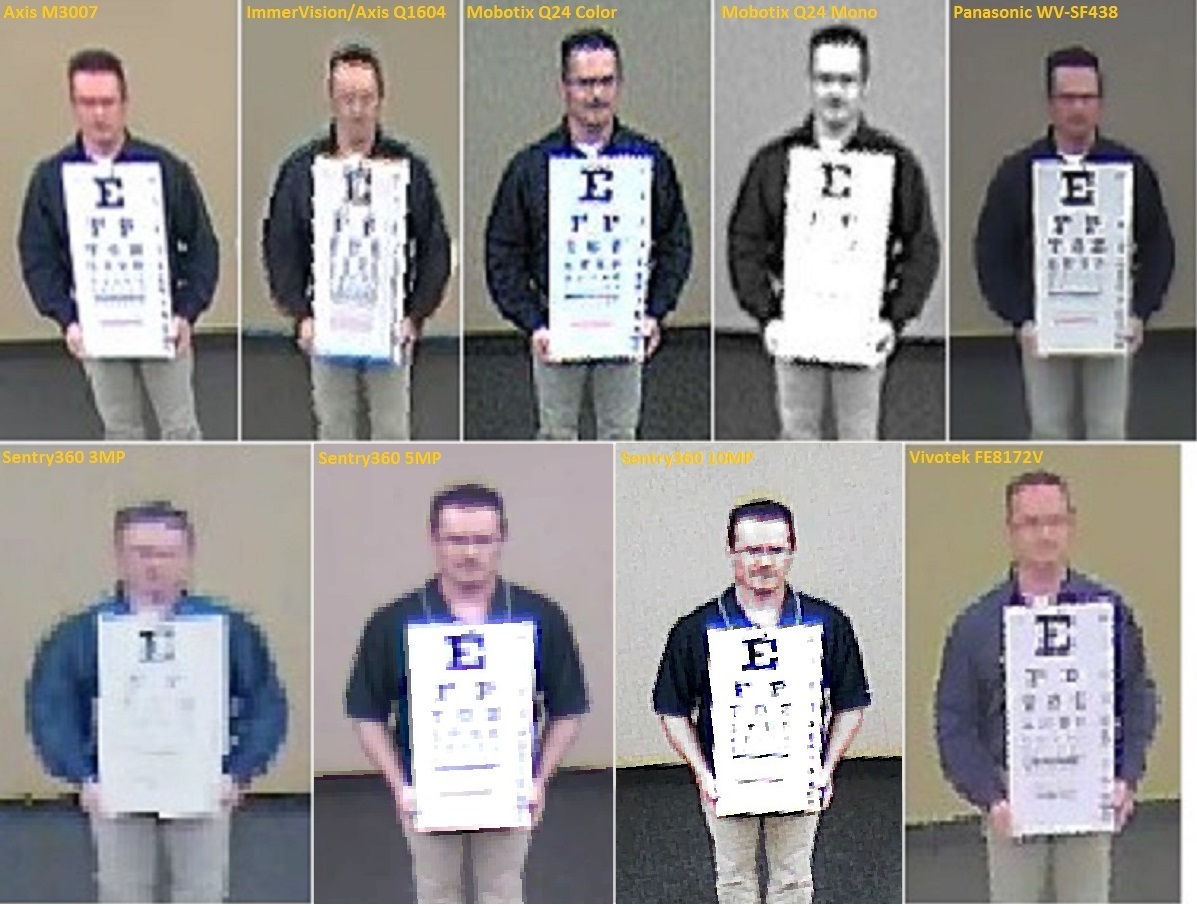 At 18', details are futher reduced, but several cameras still display multiple rows of the chart at a legible level, including the Axis M3007, Mobotix Q24, Panasonic, Sentry360 10MP, and Vivotek FE8172V. Axis, Mobotix (color), and the FS-IP10k most accurately reveal details of the subject such as facial hair and glasses. At this range, however, resolution is likely much too low to recognize an unknown subject on any camera. 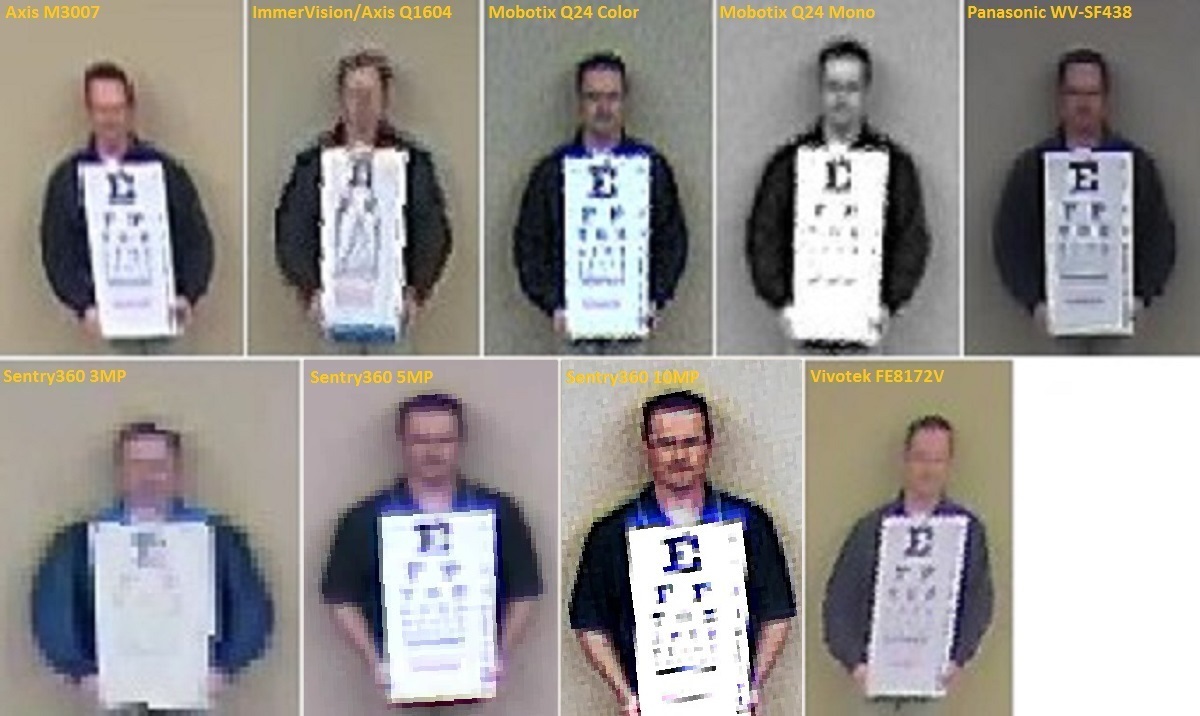 We next lowered the lights in the room to approximately 30lx. Interestingly, using default settings, the 5MP Sentry360 FS-IP5000 switched to monochrome at this light level (it is true day/night), but no other cameras did. At 6', results are mostly consistent with results above. The background of the Sentry360 10MP camera is notably dimmer, but given its much higher resolution, this is to be expected. 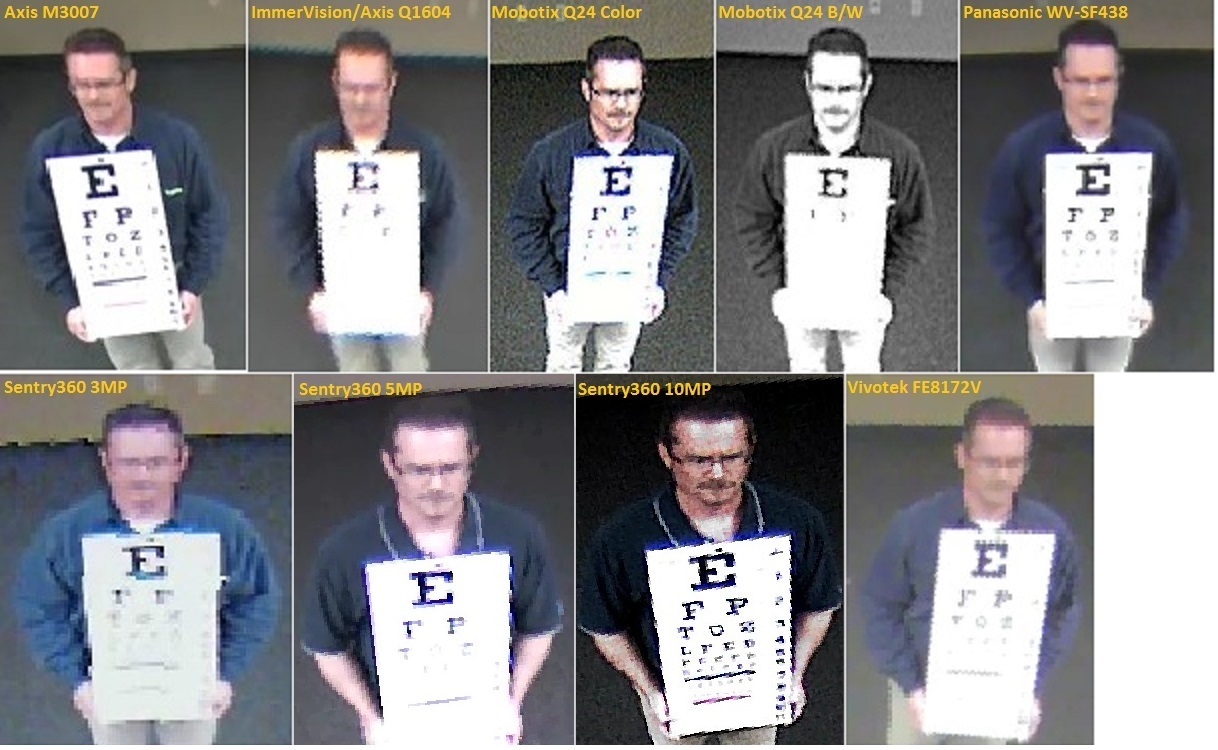 Results at 12' are consistent with full light images, as well: 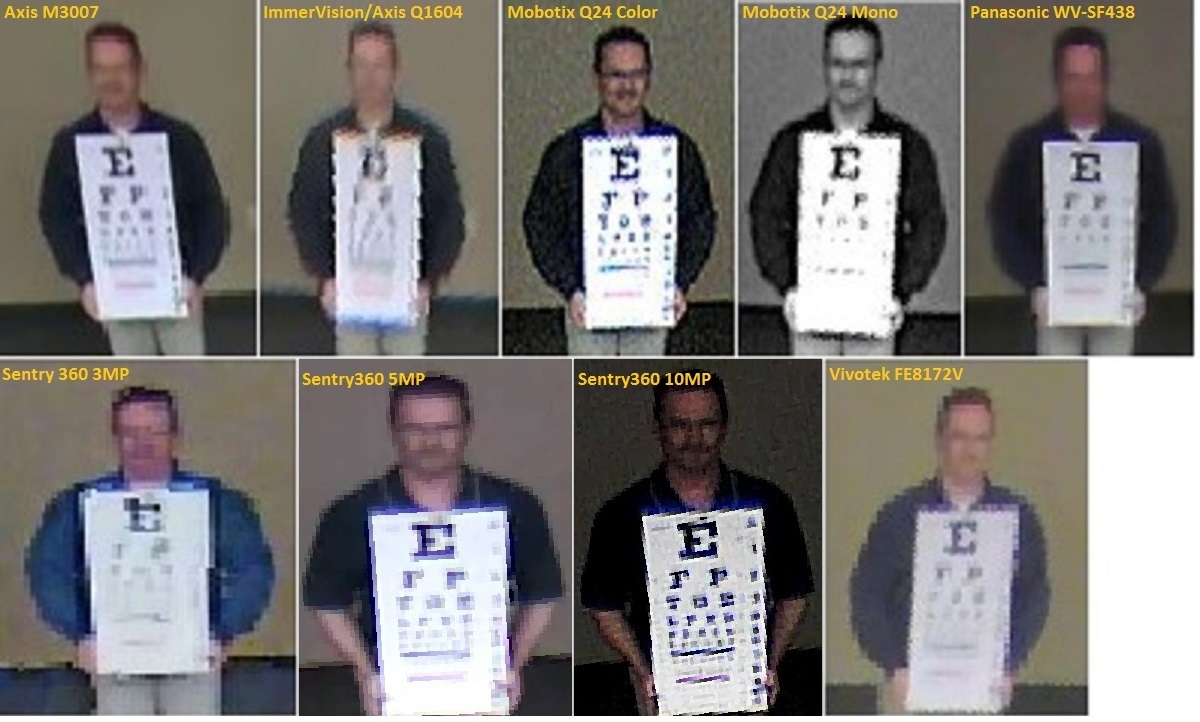 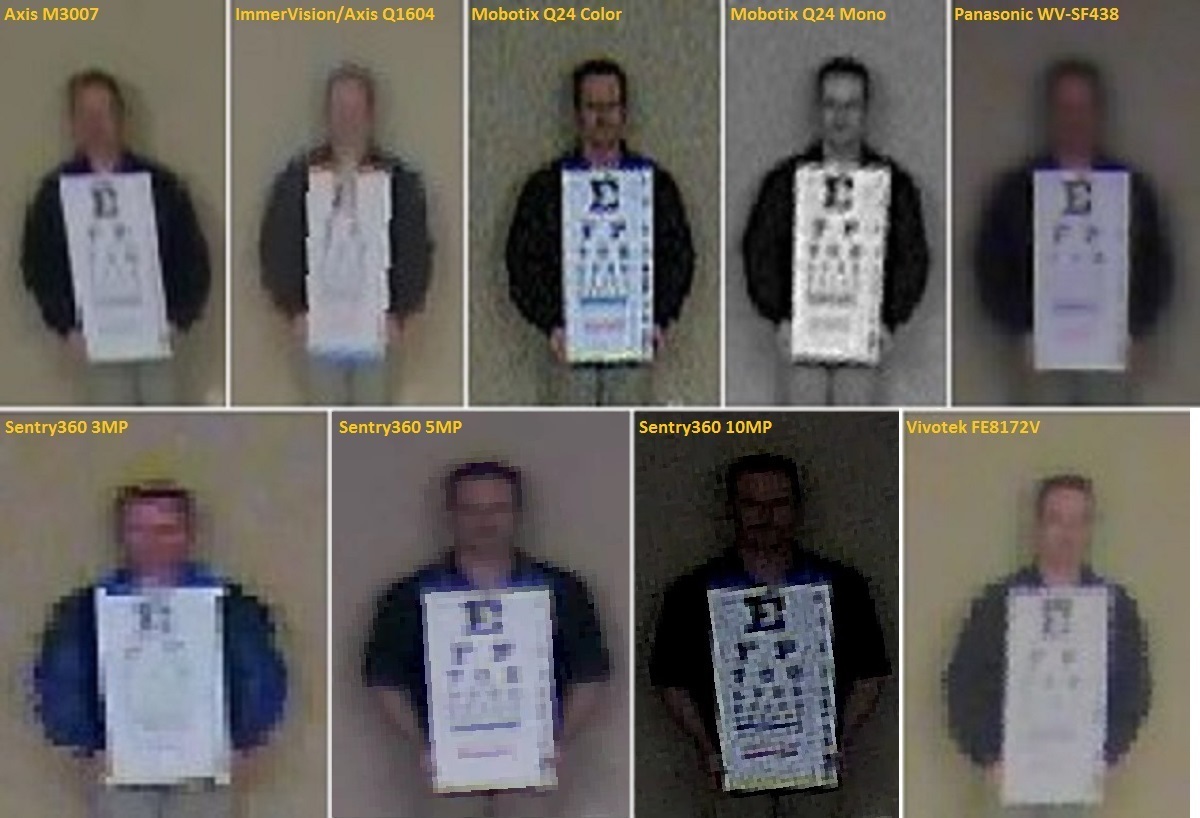 We dimmed the lights further to ~3lx. At this level, the Vivotek FE8172V and Sentry360 FS-IP10k switched to night mode, as well. The only other day/night cameras in this test are the Q1604 with ImmerVision lens, and the Panasonic SF438 (electronic day/night only, no mechanical cut filter). At this level, and 6' range, cameras still produced usable images, though Mobotix and Panasonic are notably darker, and the 10MP Sentry360 model has dimmed further, darkening the subject's face. 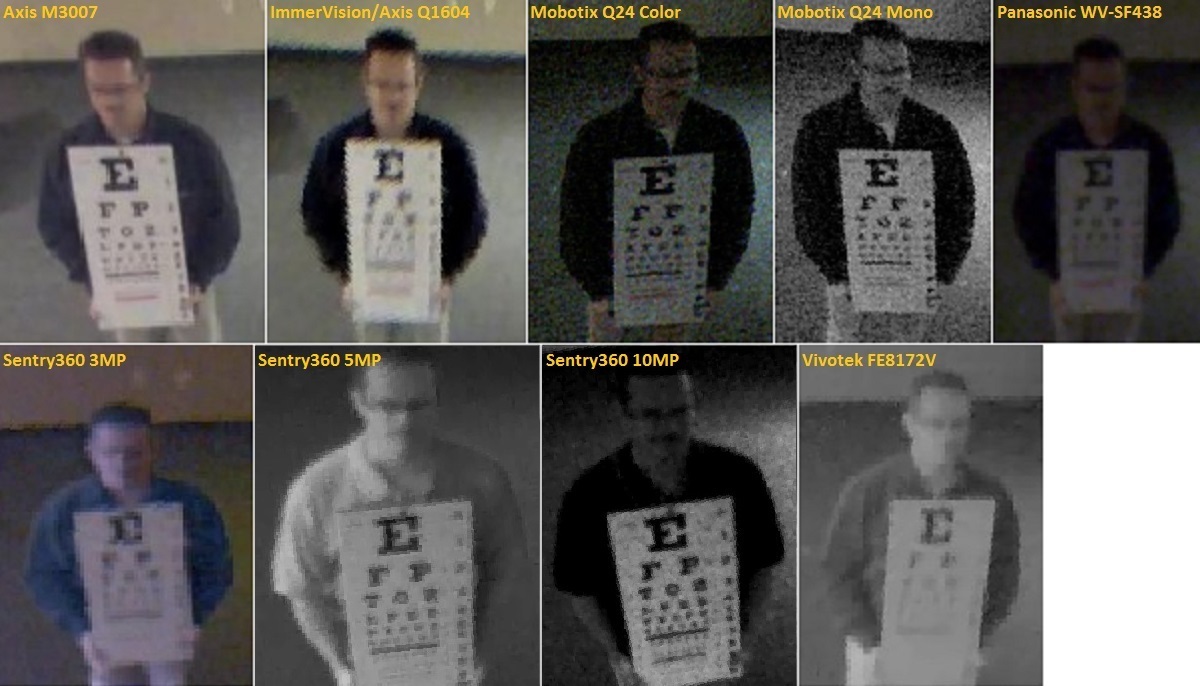 At 12' range, Panasonic and the FS-IP10k are dimmed so much the subject's facial details are obscured. The color Mobotix Q24 becomes much noisier at this light level, and the effects are pronounced at this distance to target. 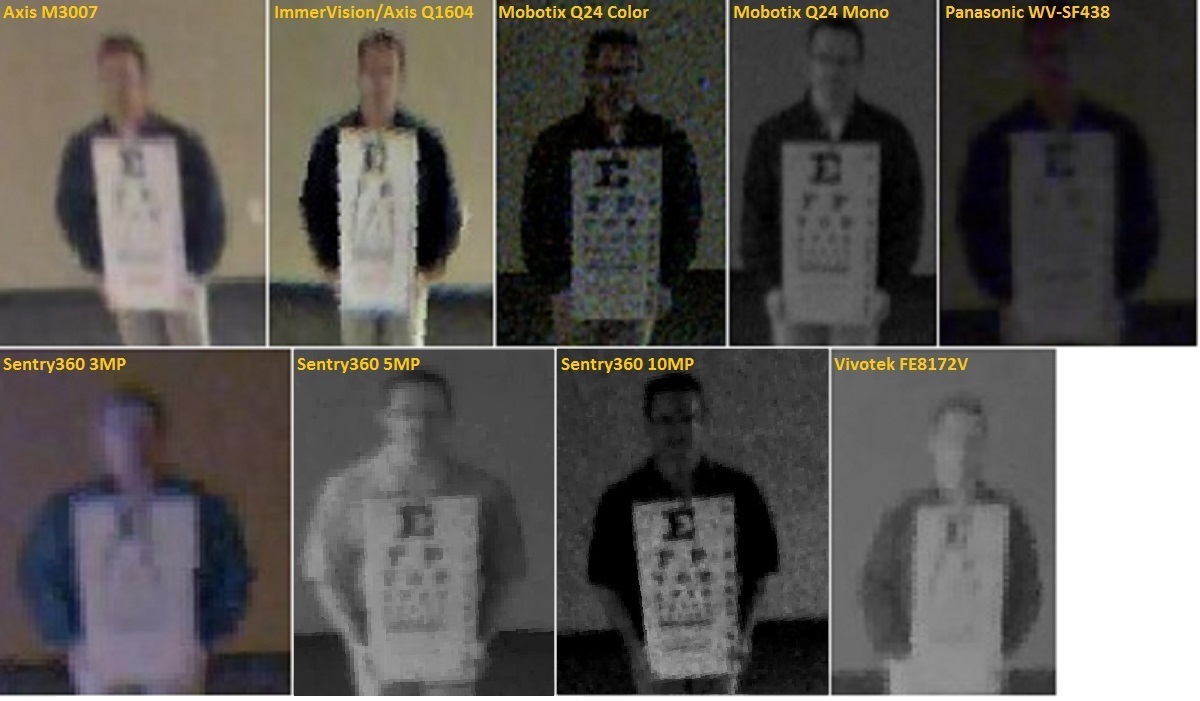 At 18' range, the lower light levels impact all cameras, with the SF-438 barely showing the subject's face, and others very blurry. The monochrome Q24 is perhaps best at this level and range. 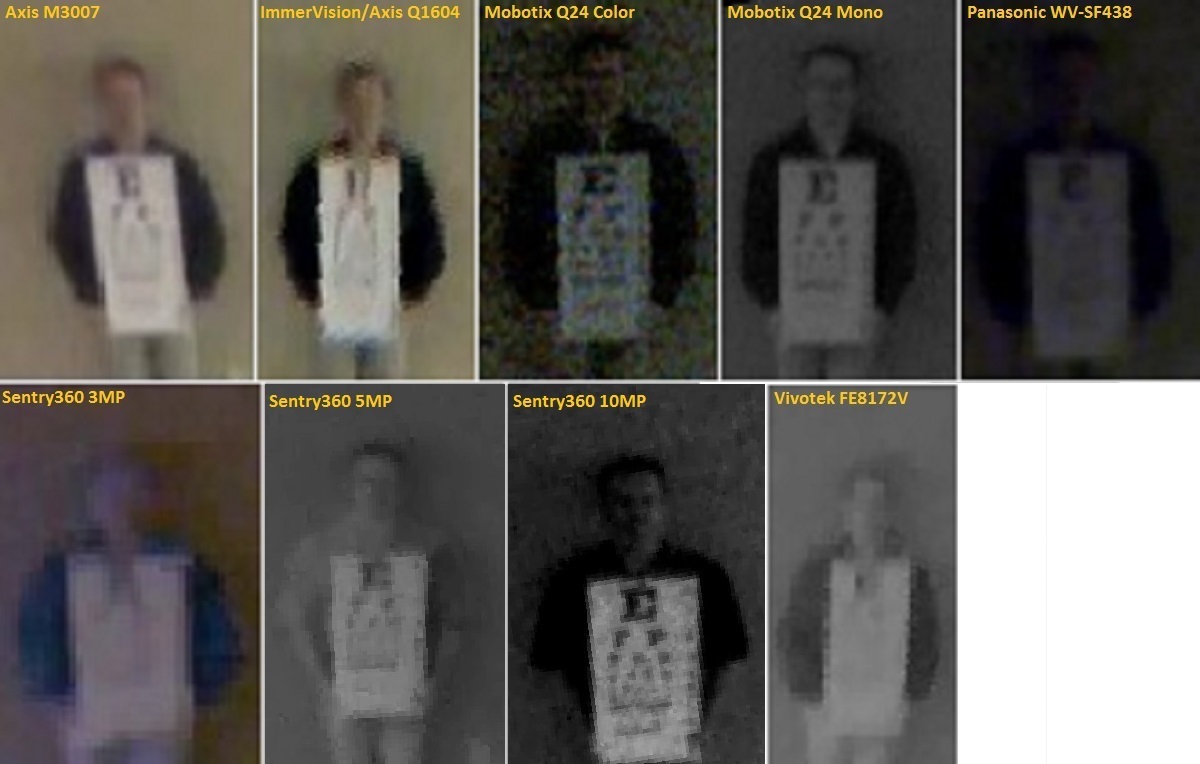 Finally, turning all the lights off, so illumination is at under 1 lx, only four cameras display the subject at all, as shown below. The Q1604, known for its low light performance, does best in this scene, with the subject and chart both visible, though without any detail. The subject also visible, but less so, in the 5MP Sentry360, along with the chart. The chart is also visible in the M3007 and FE8172V. 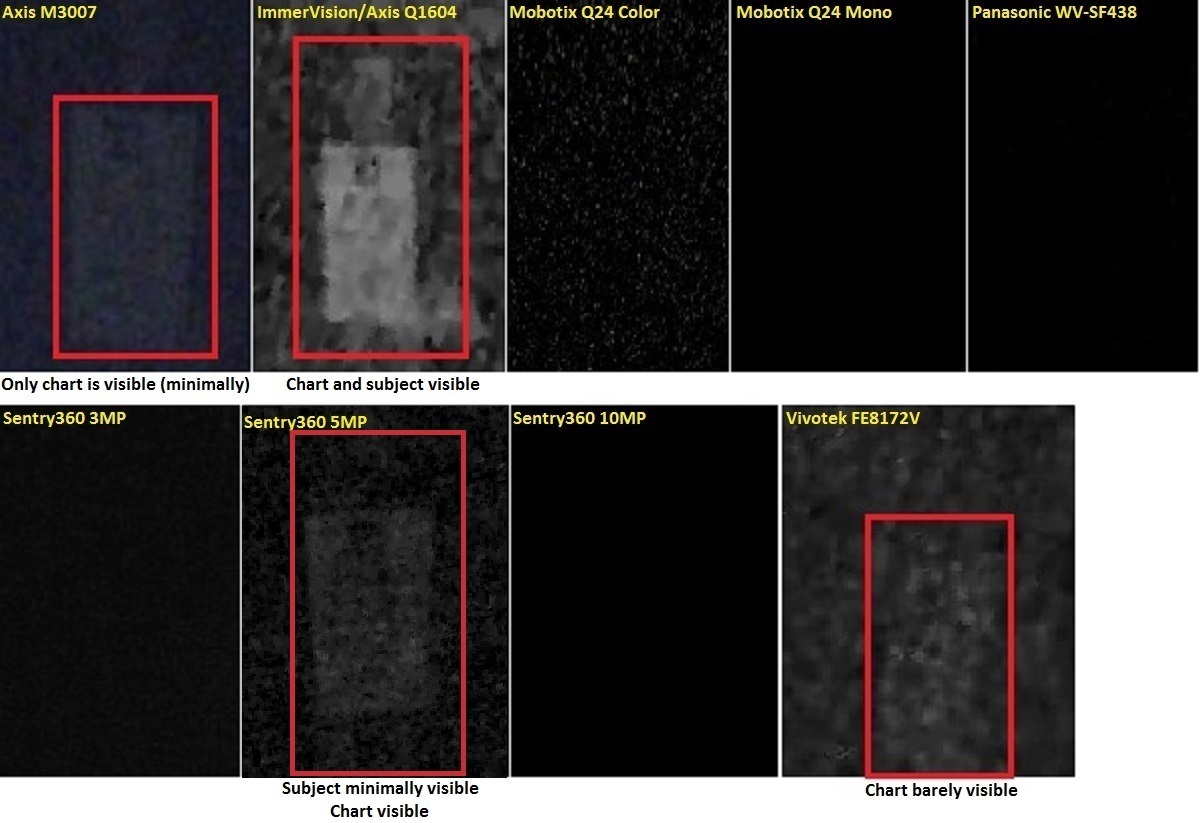 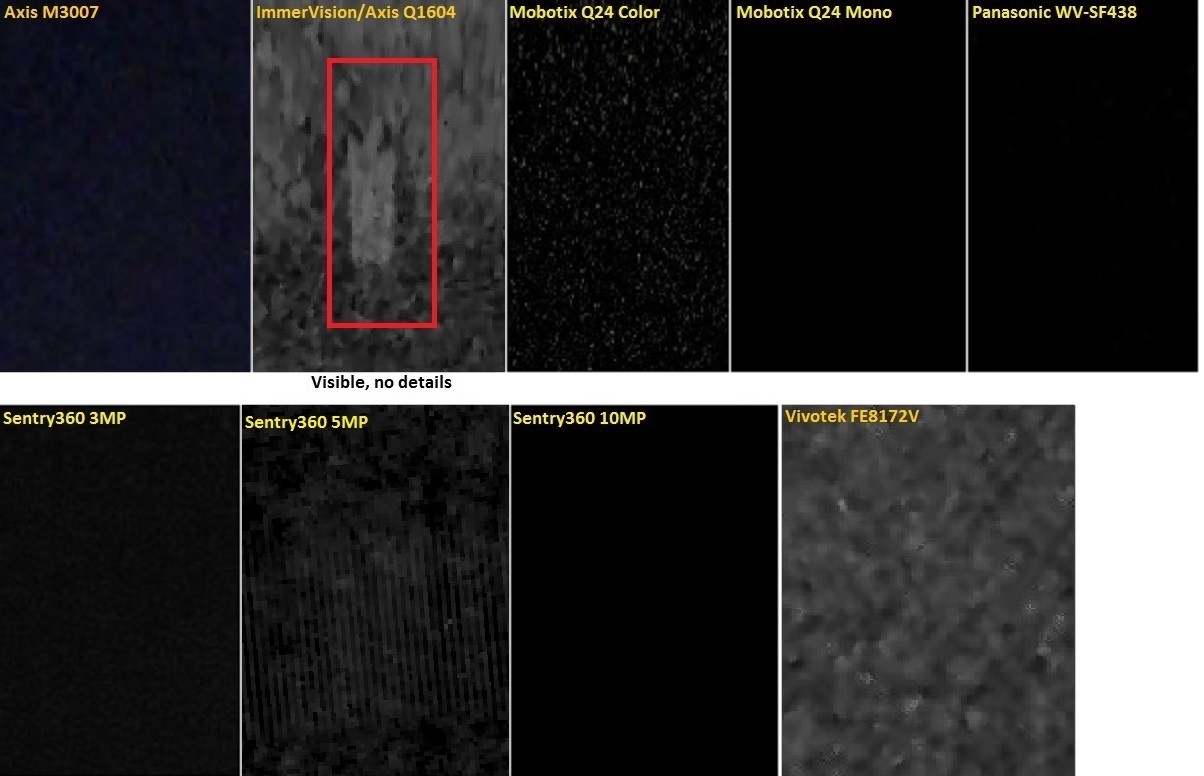 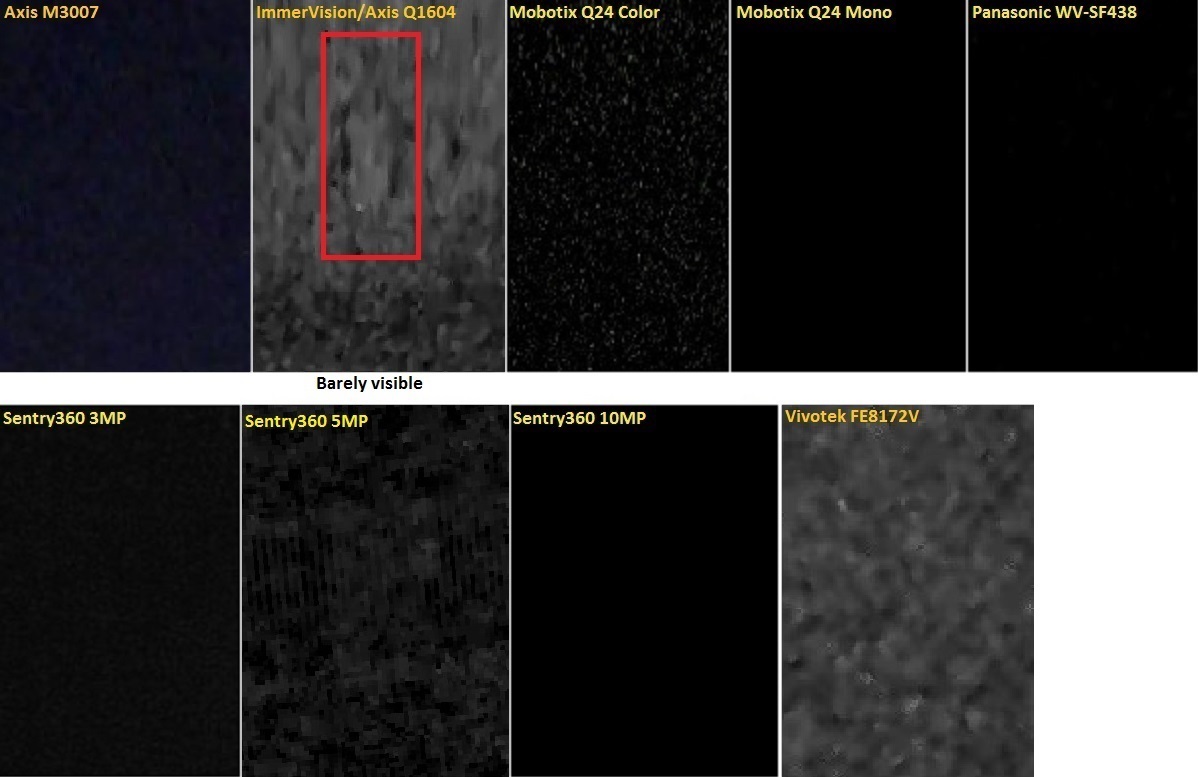 We set up the cameras in a garage with the overhead door rolled up to test WDR performance. Performance, on average, was poor against the strong backlighting. The M3007, Mobotix Q24s, and Sentry360 models had most trouble, with the background very washed out on all of these models, in most cases over exposing the subject's face, as well. The Q1604 with ImmerVision lens, not surprisingly, performed best in these scenes. The Panasonic WV-SF438, while washing out the background, still reveals details, such as the "LOADING ZONE" lettering, vans, and grass in the background. The Vivotek FE8172V shows distant object, but washes out the near background.

Moving the subject to the dark area next to the door (bottom row of images), cameras handled the lighting difference much better than backlight. Coincidentally, Panasonic and the Sentry360 10MP, which showed decreasing performance in low light the quickest, handle the dim area the worst. 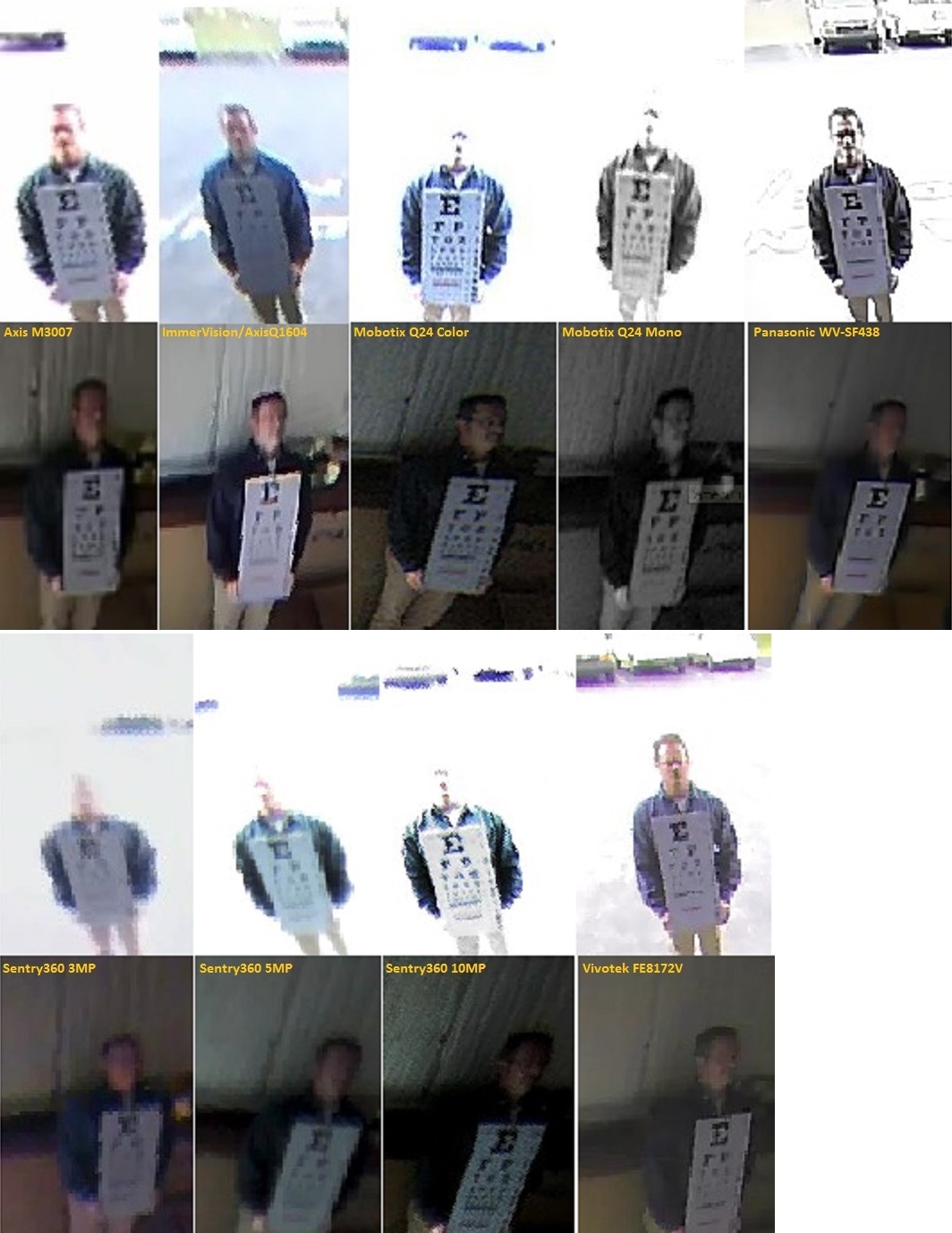 Panoramic Cameras Wall vs Ceiling Mount on Jul 12, 2016
Panoramic cameras are almost always ceiling mounted, looking down for a...
Warehouse Camera Selection Guide on May 20, 2015
Warehouses can contain many high-value items yet often do not have people...
Calculating 180 and 360 Camera Coverage on Nov 11, 2014
The key challenge in designing and using 180 and 360 cameras is to determine...
Google Acquires Dropcam For $555 Million on Jun 20, 2014
Google, via its Nest Labs subsidiary, has acquired home security specialist...
Panoramic Camera Usage Rising 2014 on Jun 17, 2014
Panoramic cameras have been around for more than a decade but only in the...
Comments (28) : Subscribers only. Login. or Join.