Panasonic has released their first 4K cameras, and surprisingly, they are panoramic [link no longer available], which they tout include high sensitivity 1/2" image sensors, true WDR, auto back focus, and other features not common in competitive cameras.

But will the combination of 4K and panoramic disappoint in low light, a historic problem for both these technologies? Or will these improvements help push panoramic to the mainstream?

To find out, we tested the WV-SFV481 against competitors from Axis and Hikvision to see how it compared in full light (below), low light, and WDR scenes:

Along with bandwidth, integration, and configuration issues.

The indoor version, the WV-SFN480 is less expensive, ~$1,100, though still higher than most competitive options.

The WV-WFV481 is one of the top performing panoramic cameras we have seen, with better details in full light and low light (~1 lux), and strong WDR performance, along with with ABF, a helpful install feature found in few competitive cameras.

However, this premium performance comes at a premium price, with the WV-SFV481 over twice the price of many competitive panoramic models.

Because of this combination we expect it will see some limited adoption, as it may be useful where many panoramic cameras are not, with moderately improved detail, though still limited to situational awareness outside of small areas.

This video reviews the physical construction of the WV-SFV481, similar to the past generation WV-SW458, though with a front access panel to make connections simpler once the camera is mounted.

At the time of our test, was not listed as supported but it functioned properly in both Milestone XProtect and Genetec Security Center. Connecting to Exacqvision and Avigilon Control Center, which also do not list support, via ONVIF or direct drivers fails. RTSP streaming is possible in those whic VMSes which allow it, with multiple streams supported.

All cameras tested here perform dewarping in the camera, not client side, and output different resolutions, with some cropping edges of the FOV more or less than others. Because of this, there is no exact way of standardizing images for comparison. Instead, we tested each using the maximum resolution single digital PTZ window possible, as this stream would most commonly be used in real world applications, as opposed to warped overview or panorama streams (which also vary widely and depend on wall/ceiling mount orientations).

Each camera was zoomed to approximately the field of view seen here, ~8' wide. 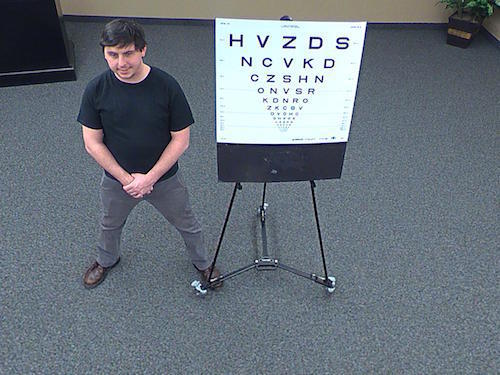 At close range, with the subject ~5' from the cameras, the WV-SFV481 provides the best details of both subject and chart, with his face clearly visible and letters legible to line 8, vs. 5-6 in the Axis and Hikvision models. 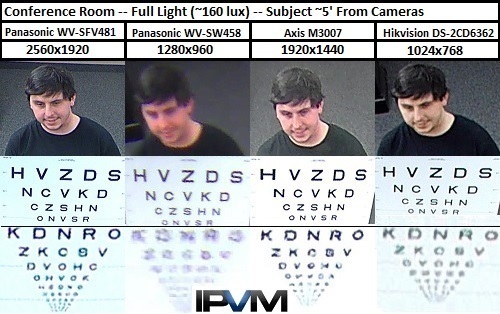 At long range, ~20', the SFV481 is again best, with clearly recognizable facial details and chart legibility to line 5. Axis and Hikvision provide some details of the subject, but not as clearly as the SFV481. 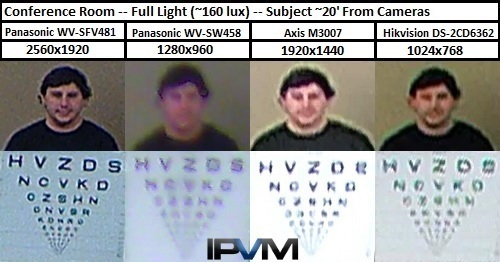 Dimming lights to ~1 lux, the SFV481 remains in color mode while the 6MP Hikvision 6362 switches to night with IR on. The WV-SFV481 provides some details of the subject and the best chart legibility of all cameras in this scene. 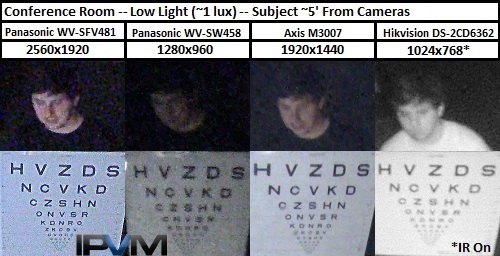 At ~20', ~1 lux, no camera produces usable images of the subject, though the Panasonic 4K model provides the best visibility of him against the back wall. Line 1 of the test chart is roughly legible in the SFV481, but not in other cameras. 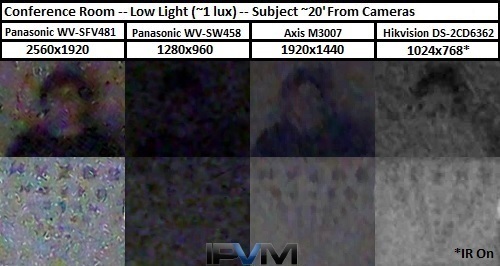 Finally, with lights off, the room is about 0.1 lux. Lines 1-2 of the test chart are visible in the WV-SFV481 here, as well as in the Axis M3007, though our subject is nearly impossible to see due to increased noise. The Hikvision DS-2CD6362 provides rough details of the subject and lines 1-5 of the test chart due to its built-in IR. 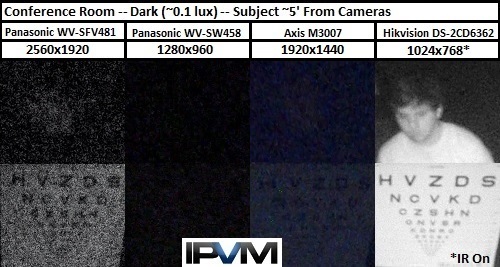 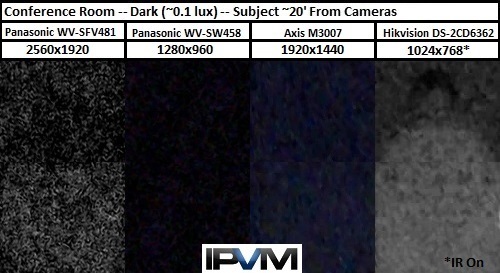 We tested WDR performance in an open warehouse scene against strong backlight and dim interior lighting, in the composite image seen below: 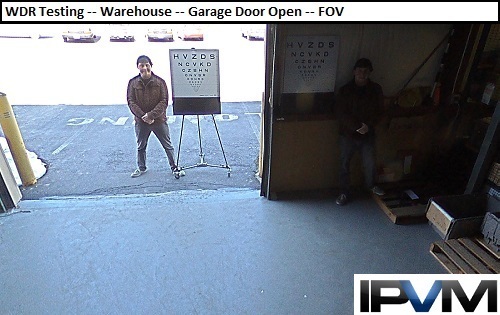 The WV-SFV481 outperforms all other cmaeras in this scene against strong backlight, with the subject's facial details visible, while he is washed out in other cameras.

In the dark area next to the door, performance is reduced, with WV-SFV481 outperformed by the Hikvision 6MP panoramic. The SFV481 and Axis M3007 produce roughly similar subject details. 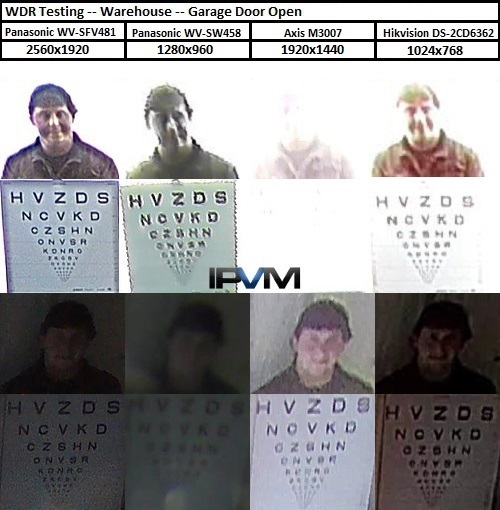 Since all cameras in this test used onboard dewarping, to compare bandwidth we checked the bitrate of a single digital PTZ window, one of the most common streams used with these models, if not the most common. These varied in size, from 5MP in the WV-SFV481, to 1024x768 in the Hikvision 6362. To compensate for these differences in resolution, we show bandwidth per megapixel in the charts below.

In full light, ~160 lux, the WV-SFV481's bitrates per megapixel are lower than both the older Panasonic model and the Hikvision IR panoramic, and similar to the Axis M3007-PV (which had the second largest PTZ window).

In low light, the 481 was once again lower per megapixel than the SF458 and Hikvision 6362, though notably higher than the Axis M3007.

Panasonic 9MP Panoramic Fisheye Tested (WV-X4571L) on Aug 02, 2018
Panasonic has released their latest fisheye camera, the WV-X4571L, with 12MP...
Axis Launches First Stereographic Panoramic Camera on Apr 05, 2018
Fisheye panoramics have not had much innovation in the past few years, with...
Hanwha 9MP Fisheye Camera Tested (PNF-9010R) on May 09, 2017
12MP sensor fisheye panoramic cameras are becoming increasingly common. We...
Hikvision 12MP IR 360 Camera Tested 2016 on Jul 28, 2016
Hikvision has released their latest IR panoramic camera, the DS-2CD63C2F-IV,...
Beware Imager vs Stream Resolution on Sep 10, 2015
Typically, a camera's sensor resolution and stream resolution are the same....
Product / Tech Roundup ISC West 2015 on Apr 20, 2015
IPVM visited dozens of booths at ISC West. Inside is a roundup of many, but...
Comments (12) : Subscribers only. Login. or Join.