The world's best all around HD camera - that's what the new Panasonic WV-SP509 was declared at the Milestone shootout.

But is it really? That's the goal of this test. We took the Panasonic WV-SV509, testing it against Bosch and Sony's Full HD cameras as well as Axis's new top-tier HD offering - the Q1604.

We performed a series of simultaneous tests in 3 demanding scenes:

The sample preview below overviews the range of performance of these cameras at 0.2 Lux:

Below, the preview shows the range of performance at a doorway dealing with harsh sunlight:

Here are the test's key findings:

Overall, the 509 is a solid camera and a step up from Panasonic's previous 1080p offering (the WV-NP502). However, it does not break new ground nor is it a clear best in any performance area. The price point is mid ranged for similar products - less than the Sony CH240 but more than the Bosch 1080p Dinion.

If you like Panasonic overall, this will be a good camera. If you are looking for a major reason to shift vendors, this camera is not it.

Below is a 20 foot wide scene, digitally zoomed, comparing the 4 cameras tested: 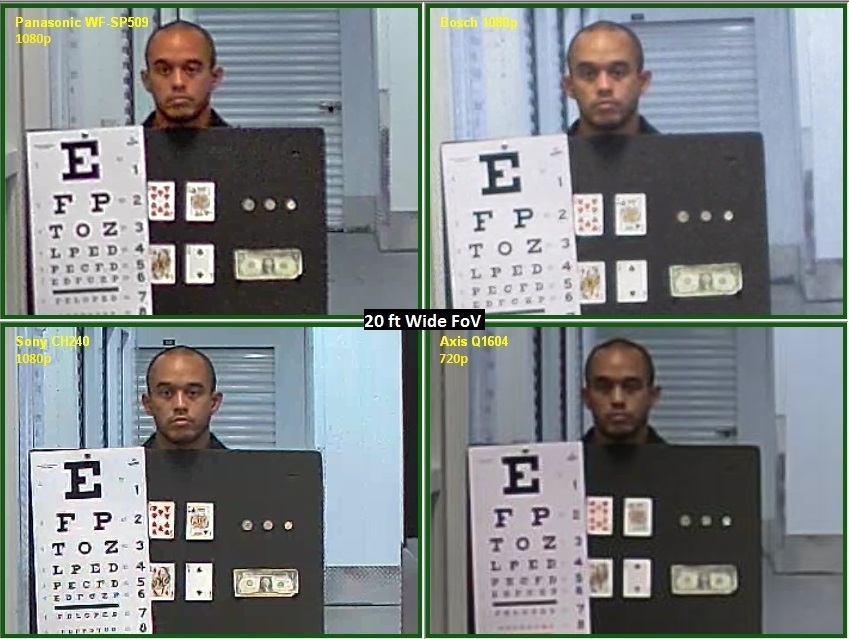 The Sony appears to be slightly more detailed than the Panasonic. The 720p Axis, not surprisingly lags.

In the next scene, our subject is back further at a 40 foot FoV: 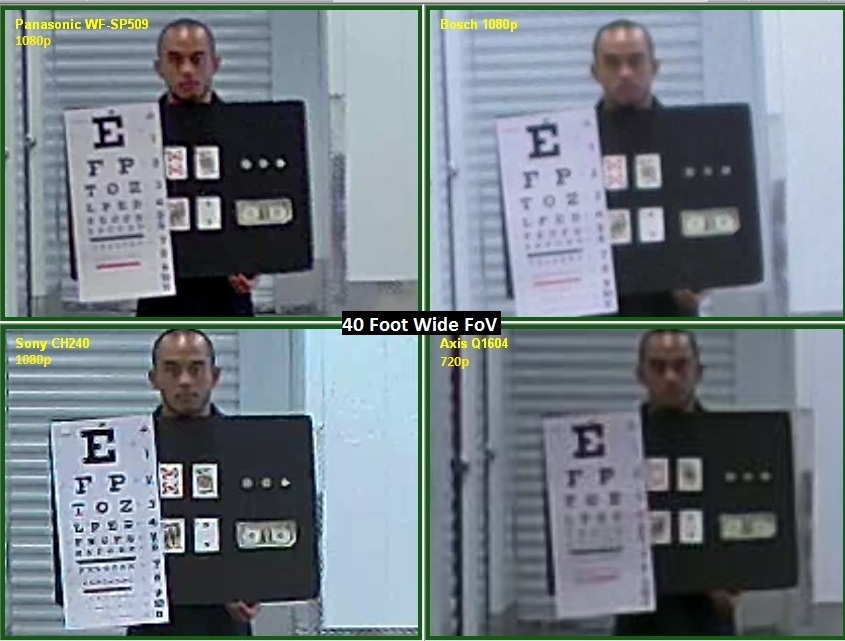 Finally, here is the same scene but with our subject back at an 80 foot wide FoV: 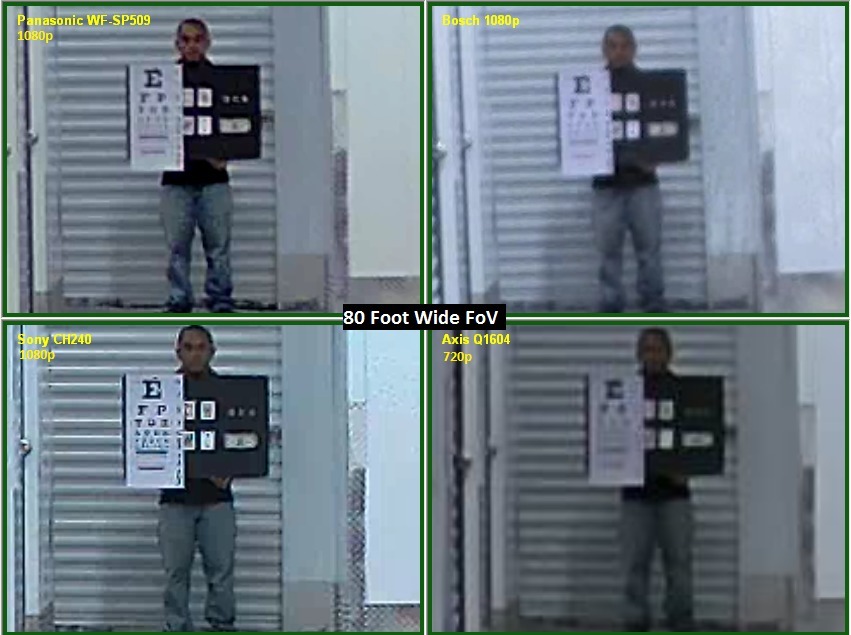 While there is an auto focusing issue in some scenarios, we carefully checked the focusing on the Panasonic before this test. Auto focusing did not impact these results. However, see below for more details on the auto focusing bug.

Now, we turn to low light comparing the Panasonic 509 to 4 cameras including the 720p Panasonic box camera, the WV-SP306.

Now, let's zoom in to our subject's face to show more detail:

The relative performance remains the same. One note on Axis, it was at a disadvantage because its shutter was kept at 1/44s, significantly faster than the others. This has to do with its WDR settings (see Axis WDR / low light configuration).

The Panasonic 509 was tested with WDR on, the typical usage for a high end WDR camera. Turning off WDR slightly improves low light performance as shown below:

That said, on the 509 WDR is either on or off at all times and you cannot schedule it to be off just at night.

For WDR, we used a fairly tough scene with a doorway facing the sun. The first comparison shows both the inside and outside of the area: 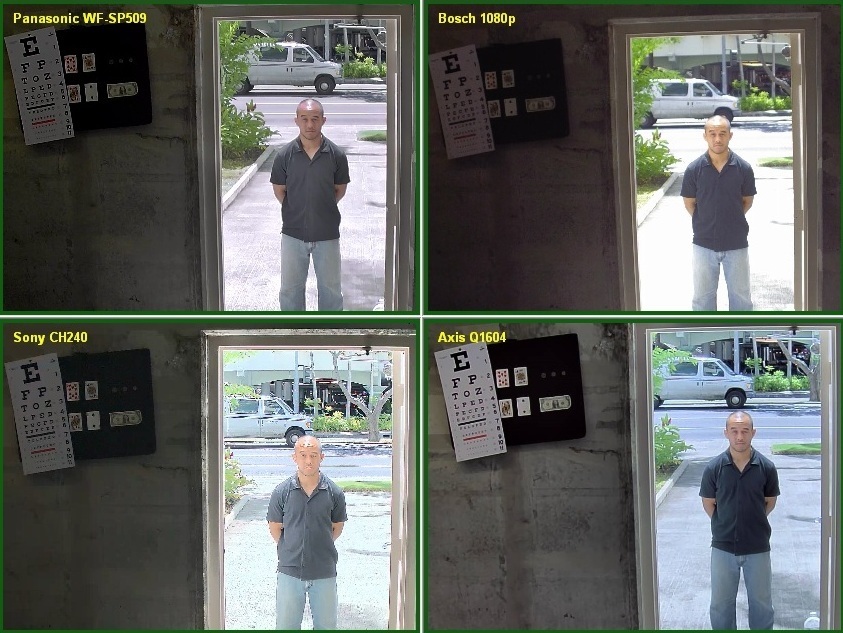 Clearly, the 720p Axis Q1604 is the best here, delivering even illumination and sharp details on both the dark inside and bright outside. The Panasonic and Bosch 1080p cameras come next while the Sony CH240 demonstrates the most problems including artifacting on the subject.

Next, we have a subject walking inside, opening the door for a moment to go through: 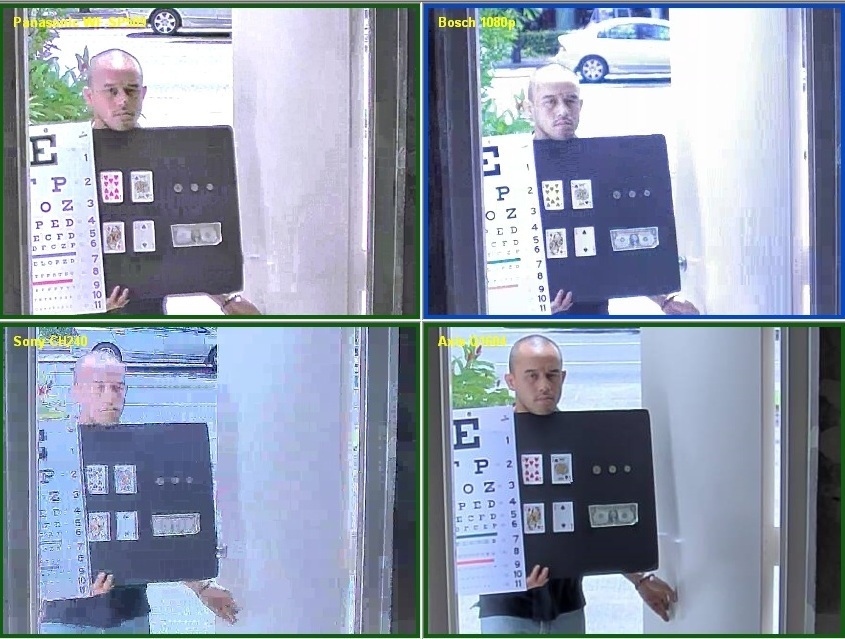 Again, the 720p Axis delivers the clearest, most detailed image. Here, though, the Pansonic demonstrates less problems with glare on the subject's face than the Bosch. Finally, the Sony CH240 continues to struggle with processing the harsh lighting.

[UPDATE: Sony says the 240's default bit rate of 2Mb/s may cause image problems. We will retest the cameras with the Sony at 4Mb/s and update this post to report any changes in relative performance.]

Bottom line, these results show that top 720p cameras still lead in overall WDR performance. While the Sony CH140 was not tested in this group, numerous other tests of the 140 show the camera's overall strength (similar to the Axis Q1604). This is especially noteworthy as the Sony CH140 is clearly superior to its 'big brother' CH240 model.

Our initial testing in a 10 x 10 area showed a problem where the 509's auto focus would slightly be out of focus. The comparison below shows the result from auto focus contrasted to the moderately better focus we achieved through manual means: 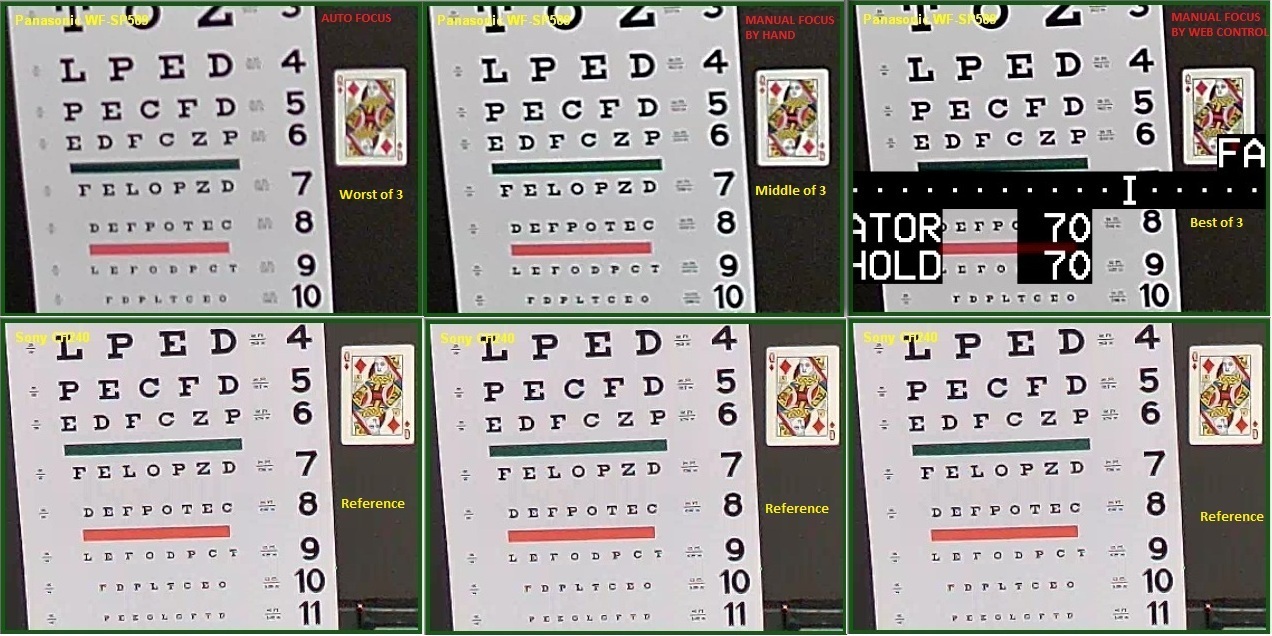 Panasonic confirmed this, noting that their "auto focus detection area is almost 80% of whole picture, so if the subject has depth and the behind subject has more contrast, camera tend to adjust to behind subject." Panasonic said they will be releasing updated firmware to correct this.

[Update June 2012: A new firmware version - 1.09 [link no longer available] - has been released that fixes this problem.]

Be careful when compensating for this problem by manually refocusing. The camera typically refocuses when switching day to night, which will eliminate the manually optimized refocus.

The 7 minute screencast below walks through the key features of the camera and its configuration:

While the Panasonic 509 supports three bandwidth modes, the range of consumed bandwidth in any of those modes is rather tight compared to traditional VBR cameras like Axis or Arecont.

Bottom line - with the 509, use frame rate mode and you will achieve some bandwidth savings without a risk of bandwidth surges.