Panasonic is the latest entrant in the smart CODEC trend, introducing their own version, called 'Smart Coding' as a firmware update to nearly their entire existing line, with claims of up to 70% bandwidth savings "without sacrificing video quality."

We tested this new firmware against smart CODECs from Axis and Hikvision to see how it performs and whether it lives up to these bold claims.

This is in contrast to most manufacturers, which typically include dynamic GOP in combination with dynamic compression (reducing compression on moving objects/increasing in static areas of the scene).

Panasonic claims that these new DNR improvements are part of Smart Coding and not controlled via the standard "DNR" controls in the camera's web interface. However, as we discuss below, image quality and issues are similar regardless of whether Smart Coding is enabled or disabled.

Note that significant motion blur and object trails are present using default settings (DNR on "high") regardless of whether Smart Coding is turned on or off. However, these effects do not significantly impact recognition details. Trails and blur may be reduced by setting DNR to "low."

Smart Coding is available beginning in firmware version 2.02 and is compatible with all existing 6, 5, and 3 series models. Panasonic tells us they plan to add 7 series (4K) compatibility in future releases.

According to Panasonic, 3D-MNR and FDF are unique to Smart Coding, only active when it is turned on. However, we saw no real noise reduction improvements, and the same motion blur and trailing issues, regardless of whether Smart Coding was on or off. For example, comparing clips of our subject as he moves through the scene with Smart Coding on as well as off, there is little, if any, difference in image quality. 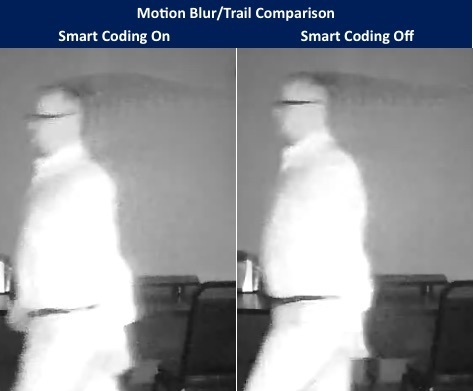 As an example of these effects in motion, the clip below was taken with Smart Coding on and DNR set to high. Blurring and long motion trails are present on/behind the subject, reducing details moderately.

Changing DNR to "Low", the trails and blur improve significantly, but are still noticeable. However, details delivered are similar to those above, with the subject recognizable as he round the corner and no excess blurring on his face.

High DNR and dynamic I frame intervals both deliver substantial reductions in bandwidth consumption. Individually, each reduces bandwidth by 50% or more (with DNR being even more substantial). Together they reduced bandwidth by 90% or more compared to previous Panasonic low light performance, as shown in the chart below: 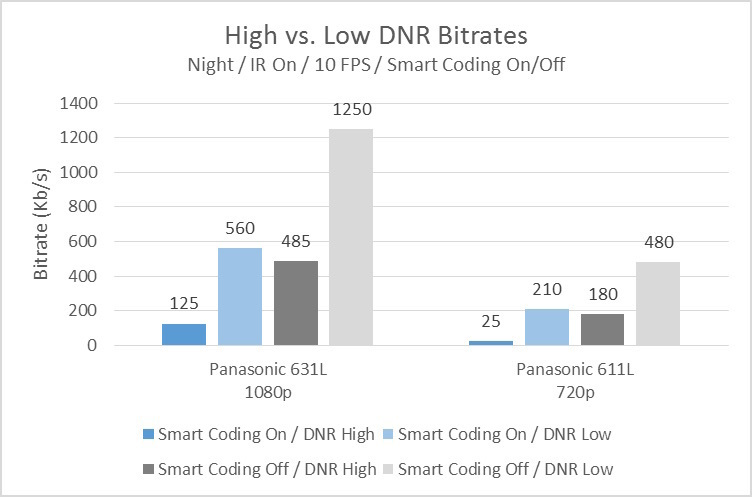 Finally, during the day, with Smart Coding on, the 631L performs similarly to the Hikvision 4132, though both are more than double the bitrate of the Axis P3225-LVE. Note that bitrates in this scene are higher than night due to patterned surfaces in our test scene which were not visible in low light with IR on (carpet, walls, etc.). 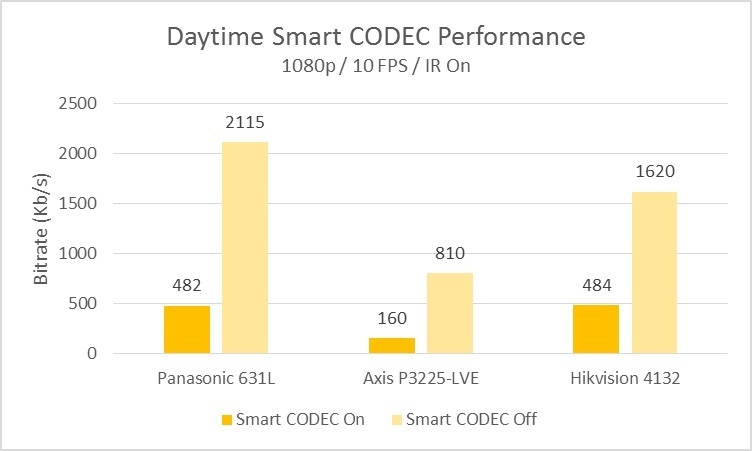 Comparing nighttime performance with Smart Coding on and DNR set to high, the Panasonic 631L's bitrate is less than half that of the Axis P3225-LVE and far less than the Hikvision 4132. 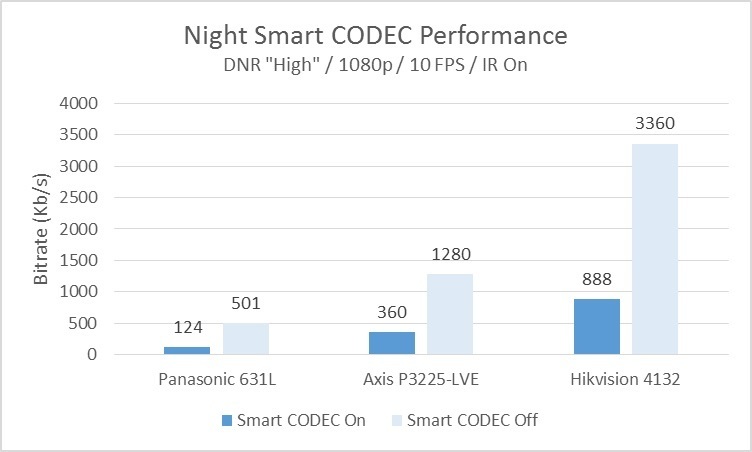 Comparing nighttime bitrates of the Panasonic 631L with DNR set to low as discussed above, its bandwidth usage is lower than the Hikvision 4132, but slightly higher than the Axis P3225, both 1080p IR domes. 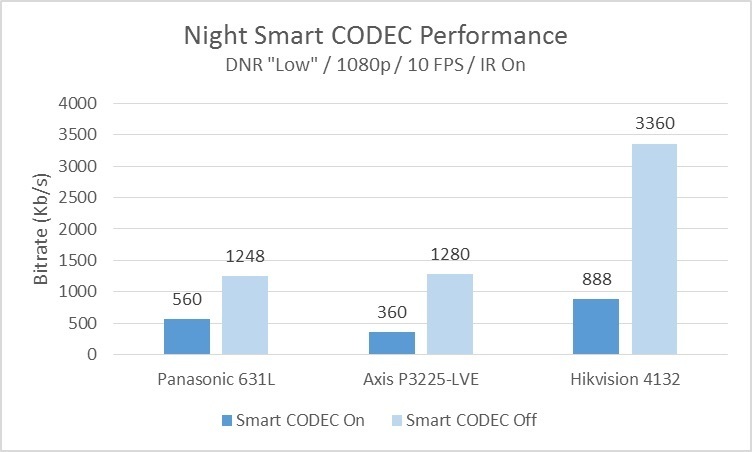 Finally, comparing the cameras in a busy outdoor road scene, average bitrates drop by nearly 70% in the Panasonic WV-SFV631L, as well as Axis and Hikvision cameras.

Note that these are average measurements. Multiple vehicles in the scene frequently resulted in spikes which nearly eliminated smart CODECS' effects, with bandwidth dropping to low levels after vehicles had passed. 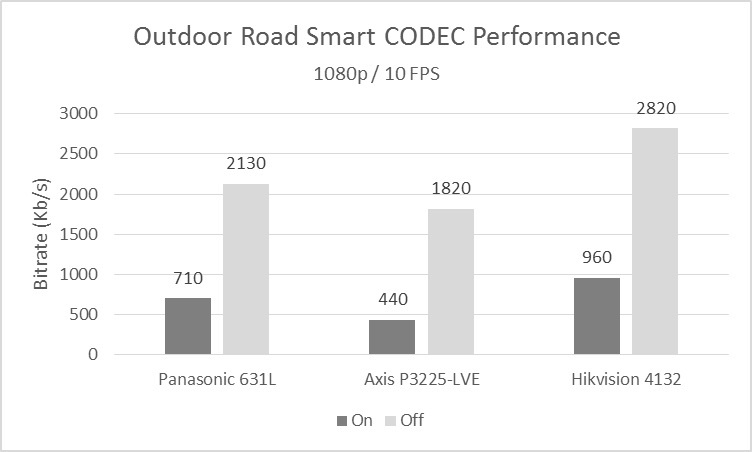 There are few controls for Smart Coding itself, simply an on/off control, similar to Hikvision's H.264+. Digital noise reduction is controlled elsewhere, in the image quality settings menu, with a simple high/low control, but no "off." We review these settings in this video: