Many have tried, but no manufacturer has yet toppled Dropcam as the most well-known consumer IP camera, despite strong brand recognition (Samsung) or bells and whistles like facial recognition (Simplicam).

Now, Panasonic is entering the market with Nubo, billed as a "Dropcam Killer", with features not found in other consumer cameras, like built in 4G, home automation capabilities, and IP66 rating.

In this note, we break down the key features of Nubo, how they compare to Dropcam, Samsung and Simplcam, evaluating its potential impact on the market.

This video shows a rendering of the Nubo, a full 360 plus exploded view:

Here are the basic features of Nubo and how they stack up against other consumer models such as Dropcam, Samsung, and Simplicam:

The Nubo camera is 1080p30, with a 140° horizontal field of view. The Dropcam Pro is 720p only with a 130° HFOV. However, others, such as Simplicam and Samsung's Smartcam, have increased resolution to 1080p with wide angle lenses as well.

Unlike many consumer cameras, the Nubo is IP66 rated, allowing it to be used outdoors. This has been one of the main customer complaints about Dropcam for some time, even spawning a third party add on housing market.

Nubo will include a 4G radio in addition to Wi-Fi. Each may be used alone, or 4G may act as a backup to Wi-Fi. All cloud recording plans include 4G service rolled into the cost. 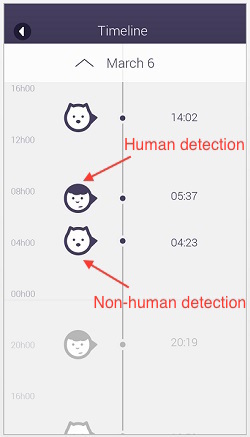 Nubo video is analyzed in the cloud for the presense of humans, aptly named "human detection." This allows users to narrow down alerts to only those containing a human subject, ignoring pets and other animals, moving foliage, etc. How accurate these analytics will be remains to be seen. Most other consumer cameras do not include analytics features, with Simplicam's face detection/recognition being a notable exception (though with inconsistent results).

Nubo includes a MicroSDXC slot for onboard storage, which will be accessible via their cloud interface. Dropcam does not include this option, though others such as the Samsung Smartcam and D-Link do, though we found it difficult to use. Panasonic Cameramanager tells us playback of SD storage and cloud storage will be via a single interface, simplifying search.

Nubo will ship with Zigbee and bluetooth radios for home automation use. This will allow it to connect to motion sensors, temperature/humidity sensors, locksets, etc. The inclusion of bluetooth also allows it to start/stop recording based on the presence of a user's phone. These features are uncommon among consumer cameras, more similar to all-in-one home security/automation systems such as Piper.

Nubo's current MSRP is $249 USD. This is higher than other cameras such as Dropcam or Samsung, which sell for ~$199 or less online. However, these cameras do not include the 4G, home automation, or IP66 rating of Nubo.

Service plan pricing is not finalized, but is planned to start at $7-11 per month per camera. This includes seven days of cloud storage, as well as a 4G data allowance for 250 clips (60 seconds each). Clips may also be shortened, with the number allowed increasing proportionately (500 30 second clips, 1000 15 second clips, etc.). The most expensive plan is ~$50 per month, and includes 2500 alarms (60 seconds each), targeted at commercial installations.

The Nubo is a promising potential competitor against Dropcam, addressing some key limitations (outdoor use, local storage) and adding analytic and home automation features at a price only moderately higher.

However, Dropcam has been available for years, and has consistently been the #1 product in Amazon's Security and Surveillance Equipment category for over a year. Any newcomer, Nubo included, must contend with this installed base. That being said, with the backing of the Panasonic brand, this may be easier for Nubo than many other competitors.

Finally, one of Dropcam's advantages is its small size and unobtrusive mount, key factors in residential installs. Nubo is larger and boxier, more obtrusive. Whether consumers will accept this larger form factor remains to be seen.