With $18 million in VC funding, and led by the former product lead for the iPod and the VP of Engineering of Dropcam, Andrew Hodge [link no longer available], hopes are high for Owl to have similar success in the car / dash cam market.

And there is opportunity. While various companies make car cams, there is no clear brand high-end leader (e.g., Ring in doorbells). But will Owl succeed at this?

The Owl Car Cam, a vehicle security camera with high-end features like dual cameras, LTE connectivity, real-time location, and more. We bought and tested Owl to see how it performs. The video below previews what we cover:

Inside our report, we examine:

The cameras provided solid daytime video inside and outside the vehicle in our tests, with license plates and facial features clear, but details worsened in low light, failing to capture plates and muddying facial feature. Owl was also plagued by motion alerts which gave no indication of the source of the alert (inside, outside, accelerometer), making it frustrating to figure out what caused a given alert, if even possible.

Additionally, despite on board LTE, camera recordings are only available when directly connected to the camera via WiFi, potentially limiting its use if a vehicle is stolen and users wish to review video immediately leading up to the event.

Finally, in our testing, the camera rebooted itself several times while driving, 4 times in over two weeks, without any known cause or warning.

Despite its issues, the Owl camera is a novel concept, with a combination of features found on few, if any other dash cams. Additionally, Owl is a young company, only ~18 months old with ~40 employees listed on LinkedIn [link no longer available] (but another 10 positions posted). Given time and additional engineering, Owl may be able to improve these shortcomings.

There were several pros in our test of the Owl cam:

However, there were several drawbacks, as well:

At $349 USD, the Owl Car Cam is significantly more expensive than typical dash cam models, such as the Yi Smart Dashcam (~$50 USD). However, these cameras typically do not include Owl features such as LTE, VMD, live location, two way audio, etc.

The BlackVue Cloud series cameras offer live look in, two way audio, VMD, and other features found in the Owl, and are priced above Owl, starting at ~$380, depending on features and storage. 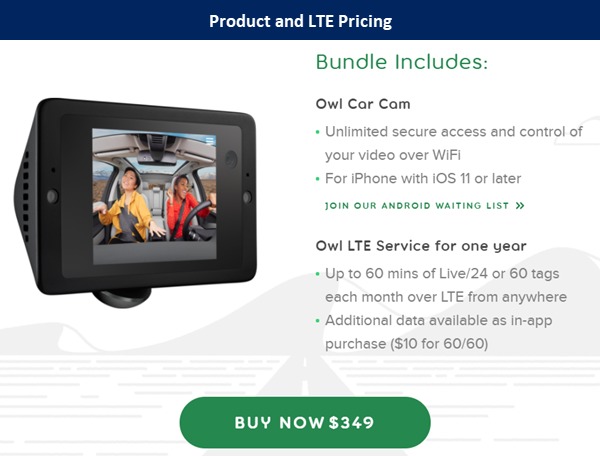 Owl is currently only available in the US and is not shipping to other countries. They state they do intend to offer the camera globally, but do not provide release dates for any other country.

The video below provides a physical overview of the camera and power supply. Notably, its front and back facing cameras, OBD connector (detailed below), built in mics, and white light illuminators.

The Owl camera has two novel installation features which improve mounting/powering the camera compared to other dash cameras we have used/tested. 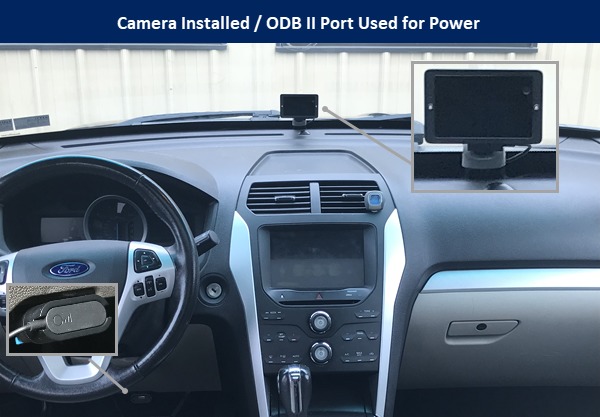 The mobile only works with iOS, though Owl has plans for an Android version "soon", with a beta waiting list [link no longer available] currently open on their site. The video below provides an overview of the Owl mobile app.

The most notable limitation of the Owl mobile app is that recorded video may not be accessed via LTE. Users must connect to the camera's local WiFi in order to view recordings.

The cameras provide solid video quality shown below on an overcast morning. 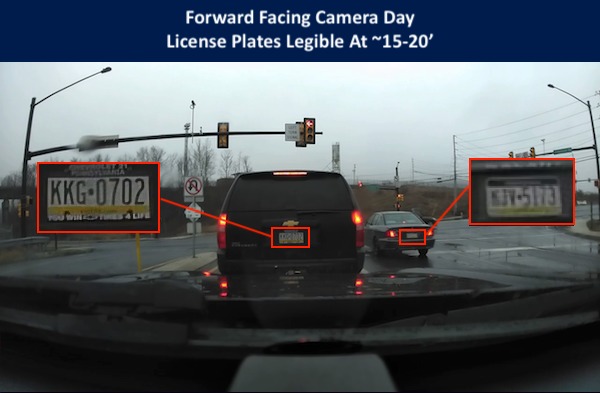 At night, the forward facing camera is unable to provide legible license plates of nearby cars, shown below. However, this video is moderately better than other dash cams we have tested, with  clearer details of the road and some discernible details of other vehicles, which others could not capture. 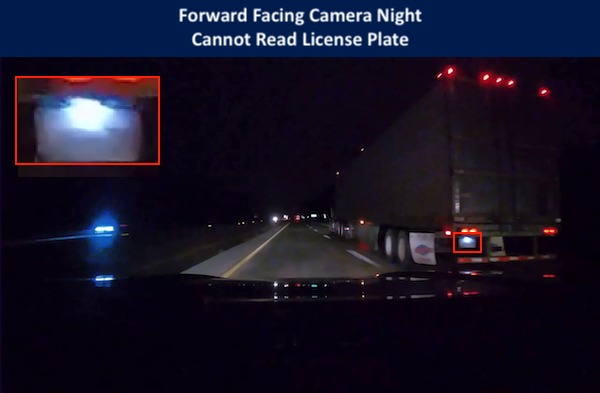 During the day, the interior camera provides clear video of subjects in the car, shown below. Note that the live look in feature provides 480p, not the full 720p resolution of recordings. 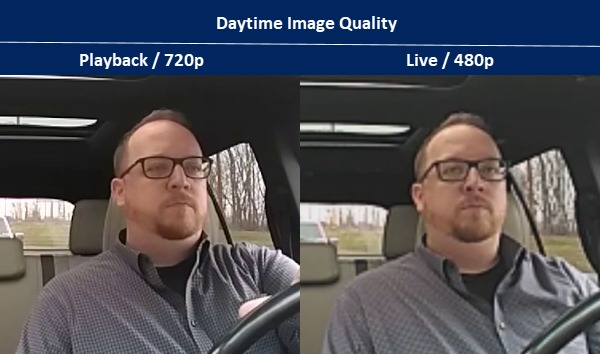 However, as light levels begin to decrease, such as sunset on an overcast day shown below, facial details become muddy, with recognition more difficult. 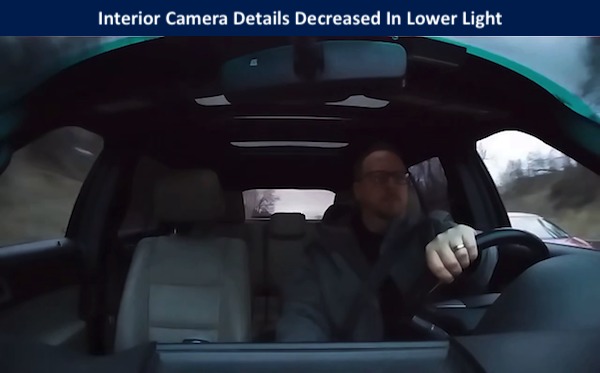 LTE is used used to connect to the camera for most activities including; viewing clips created by the user and/or motion detection, live view, two way audio, and GPS location services.

The camera uses Bluetooth during setup as well as when one wants to view the last 24 hours of recorded content. The app connects via Bluetooth and then prompts the user to join the wireless network of the camera. 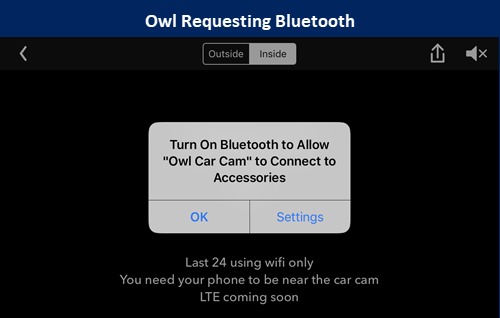 Owl's playback feature provides video from the last 24 hours on both cameras. As described above the cameras needs to be connected to local WiFi in order to retrieve the clips. Once connected, it provides a timeline of video, playback controls, and export options as shown below. 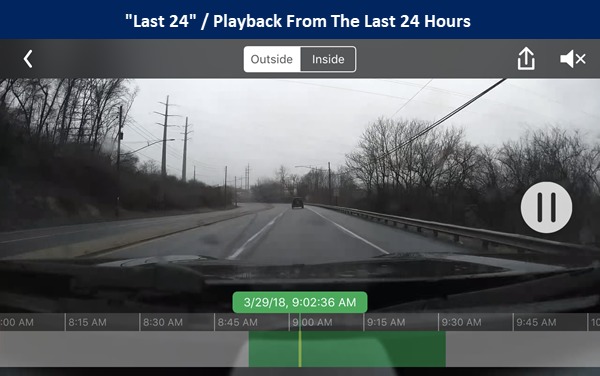 Note that video is stored on the camera, with no expansion via SD slot or USB to extend archives beyond the 24 hour limit. This may be a limitation in some cases, if users cannot access the camera immediately post-accident, for example.

Finally, during our tests, the camera rebooted multiple times with no warning while driving. This was infrequent, happening 4 times over the course of 15 days, but occurred with no visible cause. 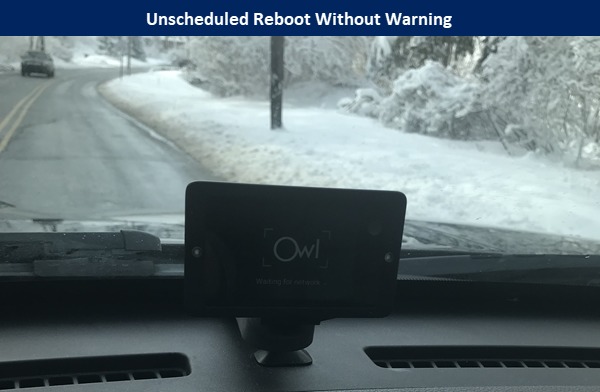 The most current firmware available at the time of testing was used in this test.

64 Video Surveillance Startups Directory 2021 on May 07, 2021
This directory provides a list of video surveillance startups to help you see...
Worst Products Tested In Past Year on Jan 09, 2019
IPVM has done over 100 tests in the past year. But which products performed...
Comments (6) : Subscribers only. Login. or Join.