Everyone wants an "open" access platform, yet no one delivers... or do they? One of the biggest names in access control is one most end-users rarely hear mentioned but widely used. Mercury Security's entire portfolio is composed of open hardware, and in theory, can be reused when changing between platforms. In this note, we look at Mercury's openness and interoperability in the access market, and identify where the issue gets cloudy: Just how far does "openness" go?

A sizeable swath of EAC vendors purchase hardware from, or design systems to work with, Mercury hardware. The company does not sell it's own brand to end users, rather instead focusing on OEMing equipment for vendors who use  Mercury's API [link no longer available] to customize software interfaces to the equipment. The standard hardware offering to OEMs includes a handful of products, notably the EP2500 and EP150x controllers, and the MR5e single door interface panel: 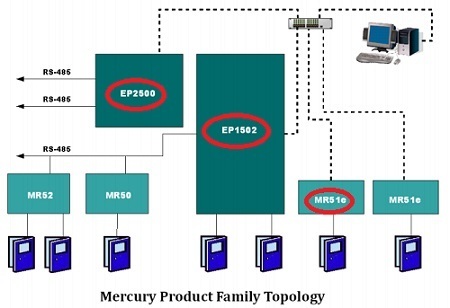 Other Mercury SKUs exist, including other interface panels and the M5 Casi-Rusco "Bridge" controller board, but regardless of their rebranding, all hardware is the same, including the same firmware.  This is the cornerstone of Mercury's "Open Hardware" identity - regardless of vendor, the hardware behaves the same way and interfaces with software using the same framework.

While Mercury's marketing and branding is not targeted at end users, the way the company applies branding labels denotes significant differences. For example, both "Mercury Powered" and "Mercury Authentic" are referenced by the company's partners, but they denote distinct OEM relationships:

While 'Authentic Mercury' hardware is interchangeable and available for a number of resellers, 'Mercury Powered' hardware is typically fixed to a specific part number from a specific provider. Take for example the IR PIM400-1502; While the firmware is interoperable, the hardware is exclusive to Schlage AD series wireless locks.

Even when systems use the same Mercury controllers, this does not guarantee that every vendor writes software to support the same operations. Features like 'anti-passback' controls or alarm monitoring notification are solely dependent on the software vendor to implement, and even if the hardware is interchangeable, the platform differs.

Not every EAC vendor using Mercury hardware supports every hardware part number. While the hardware may technically work, if the EAC vendor does not support the specific controller or interface model, it can put the end user at risk when seeking technical support.

Aside from the list of Mercury's largest OEM Partners (see: Mercury's "Platnium Partner" Roster), there are numerous other players that also are interoperable or use the company's hardware. A recent discussion topic listed several of these names, including S2, Stanley/Best, Tridium Framework (Honeywell), and Imron [link no longer available].

ACRE-Acquired Open Options Access Company Profile on Dec 17, 2018
Who is the company ACRE is acquiring? In this note, we examine Open...
Allegion Acquires Isonas on Jun 29, 2018
Isonas failed to 'revolutionize' access control as they regularly...
Isonas Cofounders Split, Launch Partner/Competitor on Nov 16, 2017
Breaking up is hard to do, especially when door access security is at...
HID Buys Mercury Security on Sep 19, 2017
One of the biggest access control deals in years. Mercury Security, the...
ONVIF Releases Profile A for Access on Aug 08, 2017
ONVIF has struggled so far in access control. In 2014, ONVIF released...
Manufacturer Revenue / Financials Directory on Jun 05, 2017
This report contains data on the revenue of 32 security manufacturers, trend...
Feenics Hosted Access Control Tested 2016 on Jul 07, 2016
In the access market, new entrants are uncommon. Because of that, newcomer...
AMAG President Becomes Mercury President on Jun 02, 2016
The head of one of the industry's most notable access control...
RS2 Access Control Company Profile on Jan 13, 2016
Inside we examine RS2 Technologies Access It! line for best customer fit, key...
Brivo Bought Out by Drako for $50 Million on Jun 11, 2015
One man is betting $50 million on hosted access control. Dean Drako [link no...
Axis Admits Access Control Expectations Low on Oct 17, 2014
Axis entrance into access control had been anticipated for years. Last year,...
Comments (4) : Members only. Login. or Join.