In this groundbreaking report, we share findings of in-depth ONVIF testing.

The VMSes included: Exacq, Milestone, VideoInsight, Axxon and Wodsee. The first 2 are ONVIF Profile S conformant, the middle 2 are 1.x / archived products and the last is not officially conformant, just claims it in marketing. This provided a range of products / conformance to evaluate.

ONVIF has an official test tool that we accessed by paying $500 to become a member. This is the tool that each camera manufacturer uses to verify their conformance. We tested this with 15 cameras to determine how useful this tool is for verifying conformance and understanding problems.

Finally, we tested the ONVIF Device Manager, an open source tool, to understand what value it offered and how it compared to the official ONVIF test tool.

ONVIF, especially the introduction of Profile S, has done much to increase camera/VMS compatibility, with most listed cameras and VMSs able to connect and stream. However, basic functions such as the ability to change resolution and framerate are not implemented across the board, and motion detection worked in few combinations, less than 25% of the time.

The ONVIF Device Test Tool is likely useful only to manufacturer technical staff, as the low level technical details required in order to properly run a test and interpret results are not available to outside parties.

ONVIF DM may be useful for basic camera configuration and feature checks, but does not perform any conformance testing, limiting its use to these tasks.

Unfortunately, the only way to truly test if a specific camera/recorder combination will work is to test it in the field. This is especially true of camera side motion detection, as neither tool discussed here can confirm that the VMS has integrated motion events specific to each manufacturer.

We tested 14 cameras with 4 VMS systems and an NVR, varying in ONVIF conformance from Profile S to version 1.02 to claiming conformance without official listing. We tested the following parameters:

The following charts detail each of these features for each VMS:

First and most basic, we tested whether the camera could be added to the recorder using proper credentials, and video streamed. In the most instances (90%+), this worked fine, with some glaring exceptions. The Wodsee NVR, which is not officially listed as conformant, crashed when the Avigilon H3 camera (Profile S) was connected. The Wodsee WIP130 would not connect to 3 out of 5 recorders. 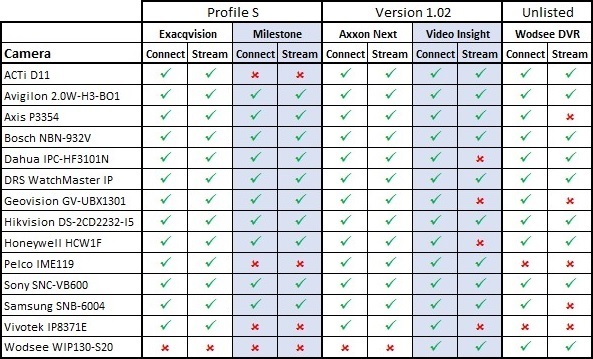 The non-conformant (but marketed as "ONVIF") Wodsee WIP130 could not be changed from any client whatsoever. 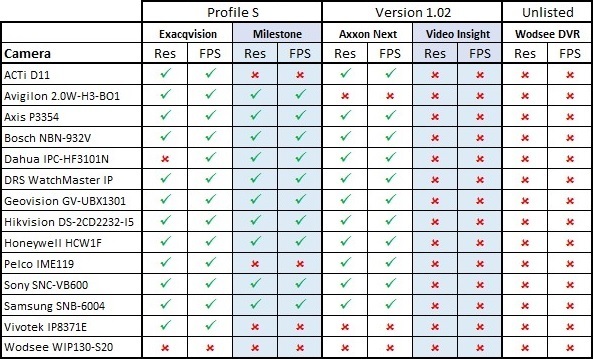 Milestone integrates motion from most cameras in this test (9/14), while Exacq handles six (though Avigilon may be integrated by inserting a few lines in one file). In the version 1.02 VMSs, motion detection does not work at all.

Most surprisingly, the Wodsee NVR received events from Bosch, Dahua, and Honeywell cameras, though it is not officially listed as conformant. 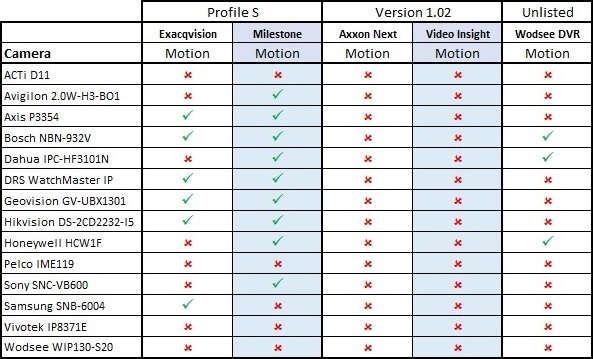 Finally, we tested whether the VMS could adjust imaging settings such as brightness, contrast, etc., from the client. These features are purely optional in the VMS client, with Exacq, Milestone, and Axxon integrating the majority of cameras, while VI and Wodsee could not adjust any. 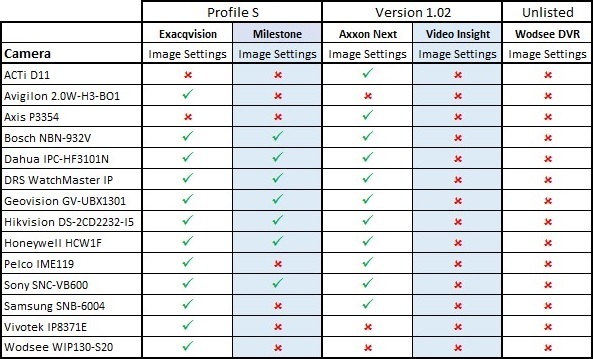 This video provides a brief overview of setup and operation of the ONVIF test tool:

Full tests take about an hour or more in many cases, depending on how many features are being tested, timeout settings, and camera performance.

Though it appears straightforward, we found several issues impacted conformance testing and we could not get any tested cameras to pass a conformance test. We contact ONVIF with these issues and failed test reports for feedback, but even after following their recommendations, we found issues still remained.

These issues include the following:

On the "Management" tab of the Device Test Tool are several timeout settings impacting testing. These settings include the time between the tool beginning tests, the time allowed for the device to reboot (occurs several times during testing), time the tool awaits for response to commands, etc.

Running a test with default settings resulted in large numbers of failed test steps. ONVIF pointed out that we refer to the "Feature List" XML document which is attached to each device in the conformance listing (see sample from Sony SNC-VB630 [link no longer available]) which shows what settings were used in the test. However, even though these settings decreased the number of failed steps, conformance still failed.

This screencast details how to find this XML document and adjust settings accordingly, and demonstrates how much manufacturers may differ.

Limited detailed pass/fail information is provided by the test tool, except in raw XML data for each step. This leaves users without intimate knowledge of the camera and the ONVIF spec unable to understand exactly why the test has failed.

In this screencast we show a failed test, which was run using recommended manufacturer specific settings and review the detailed feedback that is received on each step:

As per ONVIF, tests should be run on a closed network. Other traffic may cause unpredictable results, and increase latency, affecting the timeouts that were set in test configuration. Working DHCP and NTP servers must be available on the network, as the test tool uses these in the conformance test. Finally, ONVIF also recommends the test tool should be run as administrator.

The ONVIF Device Manager (ODM) was created by a third party developer for basic viewing and configuration of ONVIF devices. This screencast shows basic use of ONVIF DM:

Unlike the official test tool, ODM does not perform any conformance tests. Instead, it is used for basic configuration and viewing of ONVIF devices. Some of this information may be quickly used to check if devices support ONVIF functions, but almost no diagnostic information is provided if specific functions do not work.

We used the following VMS versions in this test:

And camera firmware versions as follows:

ONVIF Video Surveillance Tutorial on Jan 29, 2019
ONVIF is well known within the surveillance industry as an interface to...
DeskCamera ONVIF Screen Capture on Jan 05, 2017
Recording PC screens have historically been an expensive proposition,...
HD Analog DVRs With Exacq, Milestone and Genetec VMSes Tested on Aug 23, 2016
HD analog offerings have proven to deliver HD video at radically lower...
Milestone ONVIF Bridge Tested on Jul 06, 2016
The Milestone ONVIF Bridge could be a breakthrough. Enterprise VMSes have...
Universal Camera Tester Tested (IPC-8600) on May 20, 2016
Setting up cameras is often a pain. A number of test tools exist but are...
You Cannot Trust the ONVIF Chairman on Jul 17, 2015
A fascinating question: Can you trust...
Milestone Acquired by Canon on Jun 13, 2014
Industry insiders have been speculating about Milestone being acquired for...
Comments (40) : Subscribers only. Login. or Join.