IPVM has uncovered the key trends and top options being offered across some of the most well known and commonly used online retailers.

IPVM received quotes and recommendations from 11 internet resellers, including:

We asked each sales rep for recommendations and pricing for an 8 camera system.

Based on these quotes and recommendations from various vendors, we see these key trends:

Out of 13 responses received, nearly half are non-IP HD, with 4 using HD-CVI/TVI. These results are similiar to our integrator survey, where ~33% of integrators reported offering CVI or TVI.

Looking back ~3 years, IPVM ran a similar secret shopper post with the main focus on Super Circuits. The system quoted then was a $1,750 USD for 420 TVL analog. 8 of the 13 offers in this report are below this price, plus now almost all offered are HD.

Every sales rep we talked with at some point mentioned the ability to remotely monitor the system using a mobile app or cloud-based service. Not only was it mentioned, each vendor also said that if we needed assistance setting up remote monitoring, they would be more than willing to assist us.

Sales reps that gave us a quote had it sent to us in a matter of 20 minutes or less. Also, if we were talking to someone who asked we go on their site, they would show us the exact system they recommended. At no point during our calls or chats were we without someone to talk with for less than 30 seconds or so.

The chart below contains each response we have received from each internet reseller we contacted. Vendors are sorted by low price, displaying what type of system they quoted us (Analog, HD-CVI/SDI/TVI, or IP), what manufacturer(s) they recommend, the resolution of the cameras, key differentiator about the system, and finally price (USD).

Transmission type, manufacturer, resolution, and price all varied widely, with no two vendors quoting the same manufacturer (not counting OEMs).

The very lowest cost proposal came from Brickhouse Security, a 480 TVL analog system including a 19" monitor for $699.95 USD online [link no longer available]. However, for only $30 more, B&H suggested a Lorex 720p HD-CVI kit. Super Circuits suggested a TVI DVR and 720p cameras for ~$170 more than the Lorex kit, but including hybrid IP capabilities.

Surprisingly, the most expensive quote was not IP, but HD-SDI, from EZ-Watch, at nearly $3,000, more than 4x the cost of the Lorex HD-CVI kit.

123 Security Products was unavailable when I called (even though there were still ~15 minutes left before they closed), so instead I left an email outlining the requirements of the 8 camera system, asking for their "best available price". Got an emailed quote the next day for cameras, DVR, cable and power supply.

A1 Security Cameras rep took me directly to their website, searching for Dahua, and recommending a Dahua camera and NVR. I asked the sales rep why he thought it was a good fit, he said "we recommend this since it has done well for many of our customers in the past". Outside of that, no additional information was provided.

Chatting with the B&H sales rep was quick and easy, as after he asked me about what I was looking for, he linked me directly to a Lorex system. I asked about possibly increasing the hard drive, which he then provided me with additional links and information.

The Backstreet Surveillance rep was the least helpful out of every rep I talked to. I had to progress conversation as well as bring up answers to questions the rep should have been asking me (like how many cameras do I need). The rep took me to a page on their website that had their 8 channel kits and sid "pick one that suits your needs".

Brickhouse Security's rep asked straightforward questions about my setup and plans for the system, and recommended an analog system which ended up being the cheapest system we would be quoted for.

CCTV Camera Pros sales rep was very knowledgeable and helpful, although may have gotten off track at times, such as saying how IR illumination glares off windows and how remote monitoring worked without me even asking about it.

After outlining what my needs were for the system, the CDW rep recommended Axis himself as he said it was their go-to and "what they mainly use". Initially, I was quoted an all Axis solution for ~$2,500 and would need to purchase either a NAS or SD Cards using Axis's proprietary camera viewers, but roughly 1 hour later I was quoted with a Samsung system consisting of 4 1080p and 4 720 TVL resolution cameras for 50% less than Axis, plus a recorder.

Update: The CDW rep listed the Samsung offering as 'HDTV' and did not disclose / identify that half of the cameras were SD analog.

EZ-Watch sales rep took me onto their website and recommended an 8-channel 1080p system, which would end up being the most expensive system quoted to us. Rep said this system was "the best value for my needs".

We emailed Network Webcams regarding recommendations for an 8-channel system, but we received the reply "Thank you for your inquiry. We no longer supply CCTV equipment within the United States I’m afraid."

The Security Camera Warehouse rep was knowledgeable but somewhat rambly, and was the first one to quote us an IP based system. The rep hammered on the "future-proof" aspect of IP cameras, saying that the current trend was IP cameras and analog cameras were on the way out, even breaking down the differences between TVL and HD resolution without me asking.

When we contacted Super Circuits, no sales rep was available and an associate asked me to call back within an hour. However, I decided to email them a general idea of an 8 camera system we were looking for. We received a quote in within an hour, and after talking to the sales rep, who was friendly and apologetic for missing the earlier call.

When I contacted the Surveillent sales rep, he told me he was busy and would get back to me at a later time. We have yet to hear back. Perhaps not entirely surprising, given the poor reputation Surveillent has with a lot of customers.

The Video Surveillance.com sales rep was helpful and knowledgeable, and went so far as to create 2 separate quotes, one for an IP system and another for HD-TVI system. Sales rep was knowledgeable, helpful, and got right to the point of subjects and did not ramble.

We asked for recommendations while providing little information up front. This prompted these questions most often (and our answers to them):

We asked sales reps to either create custom quotes or recommend product from their website.

This is the sample floor plan we sent reps if asked, representing a small skate shop: 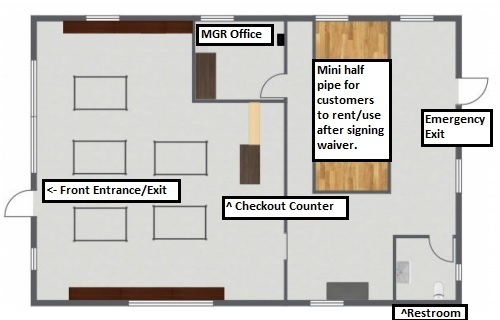 Online Video Surveillance Sales Comparison - Amazon, B&H, CDW, LTS, Super Circuits, More on Jul 31, 2019
IPVM has uncovered the key trends and top options being offered across...
Samsung Goes AHD, Sets Battle with Dahua and Hikvision on Jul 20, 2015
HD analog continues to grow. One of the biggest problems so far is the lack...
CDW: We Love You Axis But Here is Samsung for 50% Less on Jun 12, 2015
Axis steering end users to CDW has been a hot topic on IPVM...
Comments (14) : Members only. Login. or Join.