Overexposure and blooming can ruin video from cameras with integrated IR illuminators. Now, chipset manufacturer Pixim is releasing a new series, named Nightwolf [link no longer available], that is optimized for use with IR illuminators, claiming to overcome those problems. In this note, we examine Nightwolf and contrast it to rival techniques like exposure adjustment and 'Smart IR'.

Here are key details of Nighwolf [link no longer available]:

The image below demonstrates a common IR illumination problem: 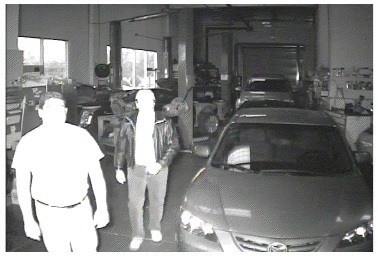 Notice how the subject's faces are washed out and overexposed due to the intensity of the IR illuminator. This image is only shows people present but provides no identifying details. Even if this camera performs above average in daytime situations, the performance at night gives it limited utility.

This is an example of improvements Pixim claims with Nightwolf: 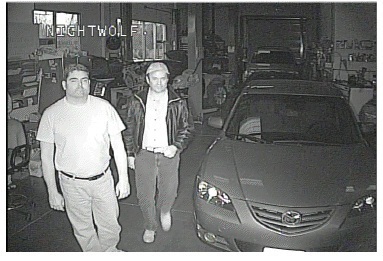 Commonly, 'low light' optimized products rely on adjustments to the exposure settings and shutter speeds to enhance performance. Nightwolf's IR optimization comes from the signal processing in the chipset, not from settings adjustments. Some common image quality drawbacks of those methods, like image blurring and ghosting, may be avoided.

Pixim claims to do this without having to use 'Smart IR', [link no longer available] which varies the intensity of IR illumination to avoid overexposure spots. However, this method also limits the overall amount of IR light cast into the scene. Theoretically, by maintaining full IR illumination and processing the image to optimize overall details, Nightwolf provides a better offering

Like Seawolf, we expect Pixim Nightwolf to be attractive choice for lower cost offerings. IR bullet and dome cameras are especially common analog offerings. The use of Pixim's Nightwolf might improve their image quality without significantly impacting cost.

The big constraint we see is lack of MP support. IR illumination is especially important for many megapixel cameras that have worse low light performance. Plus, MP is a much faster growing segment than SD.

Where is Pixim's Megapixel Offering?

Pixim indicates that a recent acquisition will help them offer MP chipsets in the future. While Pixim does not disclose its roadmap, they did note that their acquisition of Advasense last year provided them with strong technology for future MP offerings.

We think MP support is critical for Pixim's market positioning. Pixim used to be the big name in WDR but with so many of the large manufacturers offering their own WDR MP cameras and Pixim having none, this has eroded its presence in the market. While the Nightwolf looks to be a sold incremental advance, a megapixel offering is now long overdue.