Morten Tor Nielsen, veteran software developer for Prescienta working for OnSSI, has posted "In Defence of Hikvision". As Nielsen explains himself: 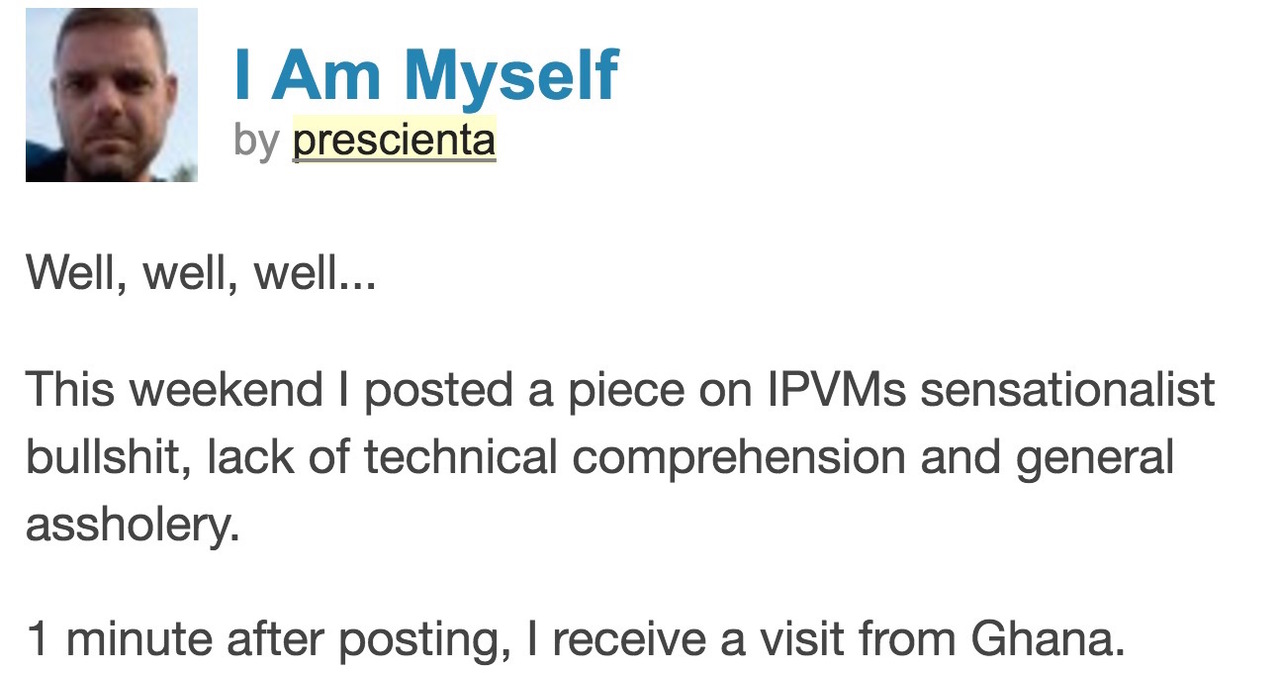 [Update: Nielsen later edited that sentence in his post.]

In this note, we examine Nielsen's defense, why we agree with his specific claims about Hikvision and where he misunderstood our reporting.

Indeed, IPVM strongly doubts the Chinese government is encouraging Hikvision to have so many basic issues with cybersecurity.

I am shocked (and proud) that IPVM finally admits that the Chinese Government doesnt want to initiate Cyber Warfare with the USA through Hikvision devices. I give you a B on this statement :)

I dont disagree with you that Hikvision has an advantage due to their government money. But what do you expect integrators to do? Start quoting more expensive stuff from other manufacturers thats not as good? Arent we all indirectly helping Hikvision's government support anytime we buy something that was "Made In China". How do you think the government gets all that money to give to Hikvision? A huge part of that money was "American Money" at one time right?

Sean, thank you for your spirited response!

Your statement here is different from what we said:

Nielsen is conflating our criticisms of the Chinese government's economic impact with our reporting of various basic Hikvision cybersecurity problems.

As for the economic side:

But what do you expect integrators to do? Start quoting more expensive stuff from other manufacturers

As we have discussed before, your approach of prioritizing short-term money making over longer term and bigger issues is, in itself, a very American thing to do. That noted, I do think quite a lot of buyers are reconsidering their approach here as Hikvision's escalating anti-IPVM marketing campaign implicitly acknowledges.

Unfortunately you have been downgraded to a D- for "wishywashyness"

As we have discussed before, your approach of prioritizing short-term money making over longer term and bigger issues is, in itself, a very American thing to do.

I am sure you will disagree with some and not care about others but there are bigger issues at play here.

Sigh, just when I thought things were coming around.

I think you are projecting ;)

Indeed, IPVM strongly doubts the Chinese government is encouraging Hikvision to have so many basic issues with cybersecurity.

comment to mean that the government would be encouraging Hikvision to be a little more sneaky or savvy about it and not to present such amateurish flaws.

To be clear, he posted that prior to us releasing this post. Indeed, that post is quoted in this post's introduction about 'bullshit' and 'assholery'.

Thank you Morten for your honesty

I can see if you thanked Morten for his perspective - as you agree with it.

But to thank him for his honesty, what you are actually saying is that you think that anyone who happens to disagree with you (and Morten) is being dishonest.

The air must be quite thin all the way up there on your high horse.

Honest or not has nothing to do with agree or not.

One can completely disagree with another one but "thank you for your honesty".

It seems to me that Marty might agree, but #3 your logic doesn't stand.

Both sides of a agreement can be honest or dishonest at the same time, as I said they are unrelated.

"Honest or not has nothing to do with agree or not."

As a simple statement, I agree.  But I've read hundreds of Marty posts and - primarily because of that - I can logically infer that Marty is using that statement as a sideways slam on the honesty of his detractors.  There is context to his statement that you are ignoring.

"Both sides of a agreement can be honest or dishonest at the same time, as I said they are unrelated."

Again, a true statement.  However, I maintain that based on the Historical Record of Marty here on IPVM that he was making a derogatory inference regarding those that disagree with him as being dishonest.

<edited from original by author to bold the word logically>

I later realized that the guy published some sort of periodical that people had to pay to read. It mostly contained self praise, and descriptions of what happens when completely inept people attempt to use high tech equipment. I suppose it could be thought of as a mildly entertaining break from the daily humdrum at the office and you can always call it "working", because it is kinda, sorta, related to what you do.

Update: Nielsen posted a new article falsely alleging IPVM called someone 'Un-American', that we "issued a fatwa banning Hikvision" and that IPVM has manufacturer sponsors. All of these are 100% factually false. 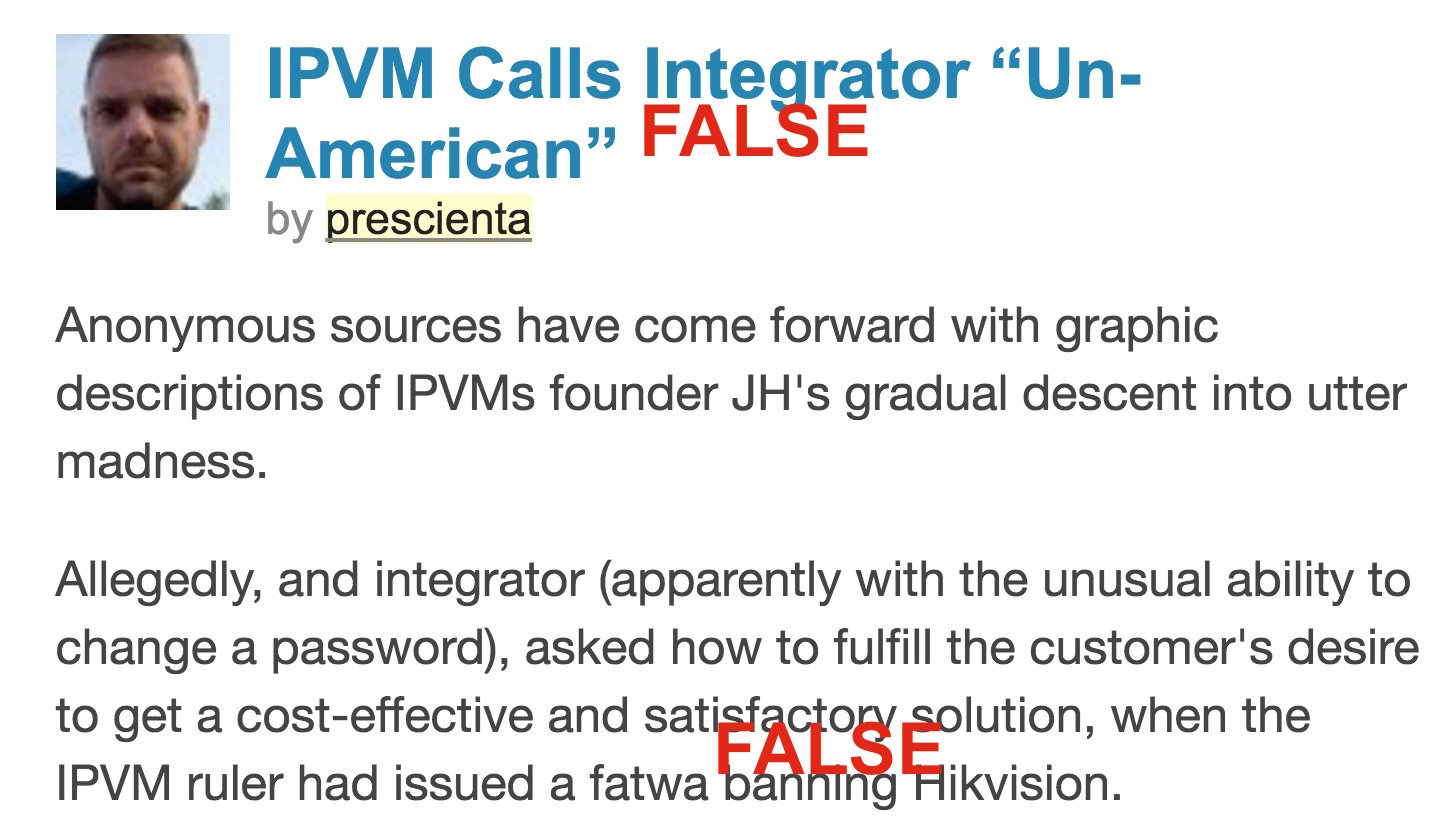 IPVM certainly supports the right to free speech, opinion, perspective, etc. but stating clearly factually false claims is defamation and we will not accept that. 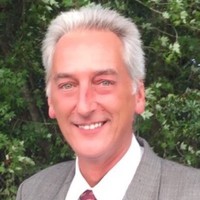 Say it ain't so, John! Counter my irrefutable proof! :)

Let's make one thing clear and I have been to enough FBI Infraguard, ASIS, University, and Security Industry seminars to know this and feel 99.99% certain about it.

CHINA performs economic espionage against the U.S. in effort to build it economy so it can complete against us militarily.

That is truth, you can make your own conclusions from there.

I have no doubt that China, like most countries (including ours), have stepped over the line on their allies when it comes to gathering intel. But you think Conducting espionage helps build their economy? I think what builds their economy for the most part are all the goods the USA purchases from them.

But has anyone ever stopped and thought about how incredibly dumb it would be for China to launch any type of large scale attack, cyber or military wise on the USA? China's economy would completely collapse without us and more than likely vice versa. China is very much business oriented, and to cause harm to the USA would cause more harm to China. Why would they shoot themselves in the foot? A similar comparison would be like taking your number one customer and punching them in the face for no reason, it just doesnt make sense. Even though we dont agree with everything they do economically or otherwise, they are still one of our greatest partners. This is why I think the conspiracy theory of using Hikvision devices to initiate a large scare cyber attack on the USA is completely bananas insane and laughable.

how incredibly dumb it would be for China to launch any type of large scale attack, cyber or military wise on the USA? China's economy would completely collapse without us

The PRC is smarter than that. They already have done numerous cyber attacks against the US. They know that they can get a way with a lot and the US will do little or anything in response.

Same thing with their unfair, mercantile trade policies. They have been doing it for years and have gotten away with it.

Net/net your assumption that the PRC could wrong the US and face imminent great damage has already been disproved and is something that the PRC has masterfully taken advantage of.

You are either incredibly naive or lack a basic understanding of how much of the Chinese economy is built on industrial espionage and out right, blatant patent infringement and theft.

Update: Nielsen, in his defense of Hikvison speculated that:

someone discovering a bug in the validation of a reset packet (I guess that is the vulnerability, because I don’t know the details).

Unfortunately, for Nielsen, it turned out to be far more direct and dangerous as Hikvision included a magic string backdoor.

Update: Nielsen is now calling for firings at Dahua and Hikvision:

the PoC of the HikVision authentication bypass string should cause heads to roll at Hikvisions (and Dahuas) R&D department. Either there’s no code-review (bad) or there was, and they ignored it (even worse). There’s just no excuse for that kind of crap to be present in the code. Certainly not at this day and age.