Wireless locks are one of the fastest growing segments of access control.

The biggest player in this market today is Assa Abbloy with their Aperio platform.

Now, one of Assa's top competitors, Allegion (the Ingersoll Rand Spin Off), is releasing their own line, Engage.

In this note, based on feedback from Allegion, we break down the features, price, limitations and competitive positioning of this release.

However Aperio, released in 2012, has a big head-start on Engage.  Aperio offers over 30 different locking products and more than 80 OEM platform partners [link no longer available] who have integrated them into their access systems. In contrast, at the time of launch in Q4 2104, Engage has exactly one hardware lock (the Schlage NDE profiled below) and no 3rd party developers announced.

Allegion explains that the primary method of integrating to Engage hardware will be through a to-be-released gateway interface early next year. However, they expect most of their existing Access Control Partners [link no longer available] to cross over and support Engage as well.

Adding doors to standard access is typically expensive, requiring both various cabling and protracted install costing hundreds or even thousands of dollars. This cost is typically substantial enough that only strategically important or high-volume doors have access control installed. The high cost means that most doors in a typical facility are secured by mechanical key control, meaning that door activity logs, access scheduling, and instant lockdown of doors are not possible.

Engage claims it will help bridge the gap, by offering the power features of electronic access at a reduced cost by eliminating most of the installation and cabling costs. In an Engage system, the lock communicates wirelessly and is powered by standard batteries and replaces existing mechanical locksets.

The manufacturer's promo video below explains Engage and how it will fit with an existing Access Control system:

In that video, three key points describe the platform:

The first lockset using the Engage platform is from Allegion's flagship Schlage brand, in a product called NDE, a full replacement leverset that also includes a keyed lock cylinder and adjustable latch: 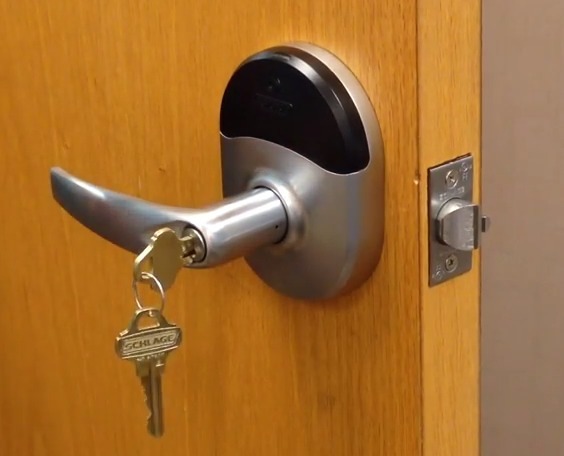 While the product cut sheet offers more details, the key points are:

However, the lockset will not work for every access problem:

Even with the slow start, we expect Engage and NDE is become a factor in access control. Even after the IR spinout, Allegion has retained a deep portfolio of A&Es and Specifiers who will write those products into specs. This will drive substantial new business, beyond the SIs who sell retrofit access solutions.

Allegion NDE Wireless Lock Profile on Sep 29, 2016
While wireless locks are one of the hottest areas of access control, two of...
Comments (1) : Members only. Login. or Join.